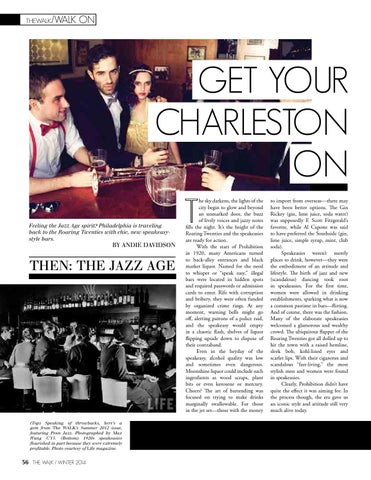 GET YOUR CHARLESTON ON Feeling the Jazz Age spirit? Philadelphia is traveling back to the Roaring Twenties with chic, new speakeasystyle bars.

THEN: THE JAZZ AGE

he sky darkens, the lights of the city begin to glow and beyond an unmarked door, the buzz of lively voices and jazzy notes fills the night. It’s the height of the Roaring Twenties and the speakeasies are ready for action. With the start of Prohibition in 1920, many Americans turned to back-alley entrances and black market liquor. Named for the need to whisper or “speak easy,” illegal bars were located in hidden spots and required passwords or admission cards to enter. Rife with corruption and bribery, they were often funded by organized crime rings. At any moment, warning bells might go off, alerting patrons of a police raid, and the speakeasy would empty in a chaotic flash, shelves of liquor flipping upside down to dispose of their contraband. Even in the heyday of the speakeasy, alcohol quality was low and sometimes even dangerous. Moonshine liquor could include such ingredients as wood scraps, plant bits or even kerosene or mercury. Cheers? The art of bartending was focused on trying to make drinks marginally swallowable. For those in the jet set—those with the money

to import from overseas—there may have been better options. The Gin Rickey (gin, lime juice, soda water) was supposedly F. Scott Fitzgerald’s favorite, while Al Capone was said to have preferred the Southside (gin, lime juice, simple syrup, mint, club soda). Speakeasies weren’t merely places to drink, however—they were the embodiment of an attitude and lifestyle. The birth of jazz and new (scandalous) dancing took root in speakeasies. For the first time, women were allowed in drinking establishments, sparking what is now a common pastime in bars—flirting. And of course, there was the fashion. Many of the elaborate speakeasies welcomed a glamorous and wealthy crowd. The ubiquitous flapper of the Roaring Twenties got all dolled up to hit the town with a raised hemline, sleek bob, kohl-lined eyes and scarlet lips. With their cigarettes and scandalous “fast-living,” the most stylish men and women were found in speakeasies. Clearly, Prohibition didn’t have quite the effect it was aiming for. In the process though, the era gave us an iconic style and attitude still very much alive today. 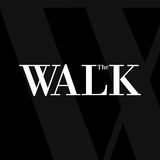