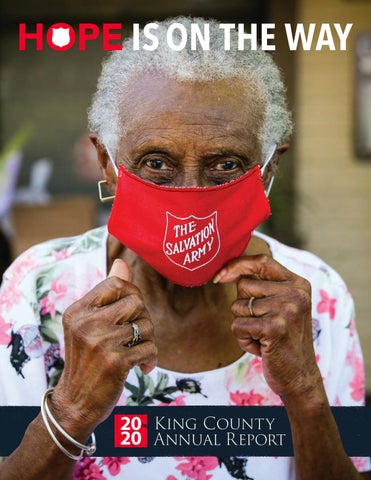 Mission Statement: The Salvation Army, an international movement, is an evangelical part of the universal Christian church. Its message is based on the Bible. Its ministry is motivated by the love of God. Its mission is to preach the gospel of Jesus Christ and to meet human needs in His name without discrimination.

there was hope for finding an affordable apartment, until I met The Salvation Army.”

HOPE Dion felt like he had no options – he lost his job, his apartment, and his community. Soon, he was living on the streets. During a very cold weekend, he arrived at a shelter operated by The Salvation Army – a decision that helped get his life back on track. There he met a housing navigator who offered resources and referrals. With support and guidance throughout the following weeks, Dion was able to access housing options he didn’t know existed. And, The Salvation Army helped with the deposit and first month’s rent. Today, Dion is living independently and looking forward to going back to work.

Impact in King County in 2020 Day in and day out, The Salvation Army of King County is working hard to help neighbors become, and stay, housed. We focus on each person’s and family’s individualized barriers to address the root of their struggles. It is our mission to stand by their side at each phase in their journey.

Including longstanding partnerships with City of Seattle and King County.

Our food banks and food distribution events are open to all, no qualifications or registration required.

safe, warm beds provided each night at our homeless shelters

Jan Anderson My late husband, Earl Anderson, and I have been supporters of The Salvation Army for many years. Every year we would send our check, which we really felt was an investment that would provide essential and ethical service to human beings around the globe. We were confident that, with our contribution and the help of so many others, victims of weather and other disasters would be immediately helped. Now, when I send my annual donation, I am still certain my gift will be used when and where it is needed. Thank you, Salvation Army, for your vision and expertise. I am privileged, as Earl would be, to continue our partnership. – Jan McPhee Anderson

“ I asked for help, and received hope”

HOPE Lois was fortunate to keep her job throughout the pandemic, although her hours were reduced, and her income decreased. She fell behind on her bills and had to make some tough decisions. She changed her budget and eliminated many “extras” including her virtual classes at the community college. But, when she received a “final disconnection” notice for her electricity bill, she knew she was in danger of losing her apartment. Thankfully, a friend told her about The Salvation Army emergency financial assistance program. She had never asked for help before and was relieved that she was treated with kindness and respect.

Alice &amp; Steve Higgs The importance of being engaged in the community has been a part of our family tradition since I can remember. When we chose to retire in Alice’s hometown of Seattle, we knew homelessness, drug abuse and despair were on the rise. We chose to become active supporters of The Salvation Army to try and make a difference. Through serving on the King County Advisory Board, it has given me (Steve) the opportunity to learn more as well as offer my expertise. We are grateful for the ways we can contribute to make a meaningful impact on King County and beyond through supporting The Salvation Army. – Steve Higgs

Jasmin recognized that she made some poor choices throughout her late teen years. Last year, on her 20th birthday, she made the decision to set and achieve goals in the New Year. With her birthday in December, she decided that turning 20, and the New Year of 2020, was a sign to make some positive decisions for herself and her daughter. First goals on the list were getting her GED and moving on from her job at a fast-food restaurant. When the pandemic hit, Jasmin’s plans came to a halt. She lost her job and income and found herself juggling schoolwork and caring for an active toddler. A visit to The Salvation Army food bank ended up connecting her with a caseworker. Jasmin’s caseworker helped her stay motivated on her GED studies and job search. She also received resources and referrals for childcare options, food programs, and help getting her Driver’s License. “Sometimes, the most important support we offer isn’t tangible,” reported Jasmin’s caseworker. “It’s the personal relationship, helping with organization and encouragement, and being there to listen.” Jasmin’s plans for 2020 were almost derailed by COVID, but with help from The Salvation Army, she is on track to achieve her goals.

“ I came for a box of food, but received so much more, including hope.”

Rev. Gwen Ehrenborg From its beginning, The Salvation Army has successfully cared for people both physically and spiritually as no other organization I know. The Army goes into areas in crisis, to establish centers of service in the most needed places throughout the world. They distribute food, clothing, supplies, provide shelter, rehabilitation, and much more. It is good to know that what is given monetarily goes directly to the needs of the local area where it is given. Due to the organizational structure of The Salvation Army, very little goes to overhead costs like salaries. What touches me most about supporting this philanthropic work is the love I see in its members. Those I have met love Christ Jesus and care for others wholeheartedly. – Rev. Gwen Ehrenborg, United Methodist Church Pastor, Retired

“The smiles of appreciation on the faces of those we’ve helped proof we have made a differenc is e.”

Volunteers Machinist Union District 751 is a long-time partner with The Salvation Army. For decades, Union Stewards, Officers, Staff and members have volunteered to improve the quality of life for others throughout the region. Every year, the Union supports local Salvation Army services to families and youth through

participation at back-to-school shopping events, and toy collections and distributions during the holidays. And, members’ generosity at the annual Red Kettle Luncheon helps fund important Salvation Army services year-round. Equally impactful, The Salvation Army has provided assistance to some Machinists Union members in a very personal and vital way.

“God loves with a great love the man whose heart is bursting with a passion for the impossible.” – William Booth (1829 – 1912) Founder of The Salvation Army 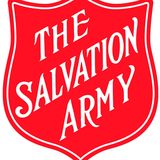