A Nationwide Effort to Regulate Counselling Therapists is Being Realized

from The Registrar magazine - Issue 1: Winter 2021

Glen Grigg is chair of the Federation of Associations for Counselling Therapists in British Columbia (FACT-BC) which collectively represents approximately 6,000 counselling therapists. He contends that an unregulated marketplace increases risk. Associations whose roles are to solely advocate on behalf of professions, not the public, are ill-equipped to regulate the therapists. “There’s no one body that can set standards and hold people responsible for those standards. It’s not safe and it’s not fair,” he says. “If you don’t have one authority that can do that, the kinds of harms that can slip into a system are very serious,” Grigg says. “We hear about unregulated people who have provided incompetent and harmful care, and there’s nothing we can do about it.”

For decades, the FACT-BC has been lobbying for regulation of the profession, and in December, it submitted a formal application to the BC Minister of Health, Adrian Dix, calling on the province to declare regulation of psychotherapists in the public’s interest.

“For decades, the FACT-BC has been lobbying for regulation of the profession, and in December, it submitted a formal application to the BC Minister of Health”

In Alberta, after years of lobbying, a new college is set to open this fall after 12 years of lobbying. Fourteen associations merged to become the Association of Counselling Therapists of Alberta (ACTA), which will transition to the College of Counselling Therapy of Alberta in the near future. Linda Sahli, CEO and registrar of ACTA, says she expects up to five thousand practitioners to be registered with the College. “It’s a long time coming. I think yesterday was the right time to do it, but today is a critical time to do it. Especially during pandemic times, mental health services are becoming so much more important,” Sahli says. “We’re also dealing with the opioid crisis layering on top of it and exacerbated by the situation. Becoming a regulated profession will increase the capacity in a province to provide [mental health] resources.”

“In PEI, it’s moving along really nicely now but they had to wait a few years because there was new umbrella health legislation, and there were four or five professions ahead of the counselling profession,” MacCallum says. “The process is different in every province; it’s really a matter of the will of the ministry of health to go ahead with regulation.”

As it stands, associations have professional codes of ethics but because they aren’t granted statutory authority to regulate a profession, there are limits to recourse with no disciplinary consequences if practitioners do harm. “The worst we can do to somebody if they are practicing unethically is to say that they can’t be a part of the association anymore, but we can’t stop them from practicing. We can’t pull licenses or levy fines; we can only work with the counsellor to rectify the situation if possible,” MacCallum says.

Regulation also helps make counselling therapists part of healthcare teams, MacCallum says. “A family doctor sometimes would be reluctant to refer to a counsellor if they weren’t regulated because they weren’t actually sure if they were referring to a practitioner that is appropriately trained. Now, in Ontario, for example, there is a regulatory body and there are standards.”

Health plans that employers offer to employees often only include psychologists and social workers, but not psychotherapists, MacCallum says. “We’ve been talking to insurance companies for years and have advocated for the inclusion of counsellors, and they always said come back when you’re regulated. We’ve been working really hard at regulation and we’re starting to see a shift in the insurance industry.”

With these efforts it is hoped that regulation of the Counselling Therapists will be widely implemented across Canada. This will benefit the counsellors and patients in assuring the professionalism of their craft. More information on counselling therapy and other regulated health professions can be found in the Canadian Regulatory Guide - www.regulatoryguide.ca. 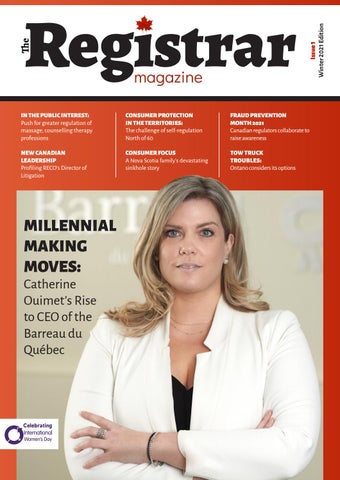