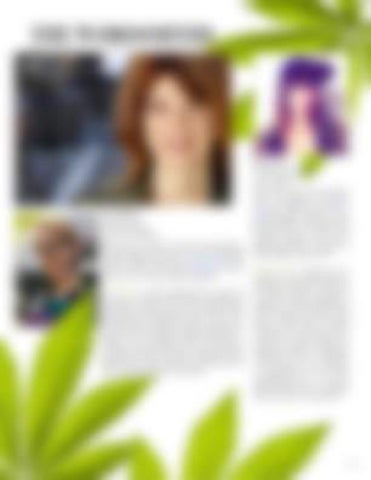 BIO: Debra has covered cannabis for the last 5yrs writing for The Street. com, Forbes and Civilized. With her Wall Street background, she gives her cannabis reporting a financial focus and believes this is the biggest business story of the decade. GREEN ENVY: Debra won an award in 2014 for Best Video in a News category for “Guess Where People Want To Buy Pot” by the ASBPE.org. She has interviewed all of the major players in the industry and is in demand as a moderator at cannabis conferences. Janet BURNS Freelance Writer Twitter: @warmlyburns

BIO: Janet is a freelance writer and weed-enthusiast living in Brooklyn, and who covers the blossoming cannabis industry from afar for Forbes Online and other sites. She’s also the host of The Toke, a cannabis news, law, science, and culture podcast. GREEN ENVY: After spending most of her life in parts of the West Coast where cannabis use was fairly common, Janet now finds herself sticking up for the plant whenever she can to help investors, politicians, and everyone else see the many benefits of ending cannabis prohibition. As a cannabis writer, she hopes to continue sharing things she’s known about the plant for years, as well as what she learns from activists and experts as the field of cannabis research keeps on growing.

BIO: Hayley has written about crime, community, cannabis, arts and culture for the L.A. Weekly, Leafly, VICE, Los Angeles Magazine and the Jewish Journal. The L.A. Native and longtime Dodgers fan previously worked as a reporter at NPR affiliate, KPCC 89.3. GREEN ENVY: Living in Los Angeles and writing about it’s marijuana businesses, Hayley is acutely aware of what’s at stake if we fumble legalization regulations at a local level, but she is hopeful that practical policies will result in much needed tax revenue for the city and state. As the federal government continues to threaten California with a crackdown on all fronts, from cannabis to immigration, it has been inspiring for her to see how many Golden State residents and leaders have responded.