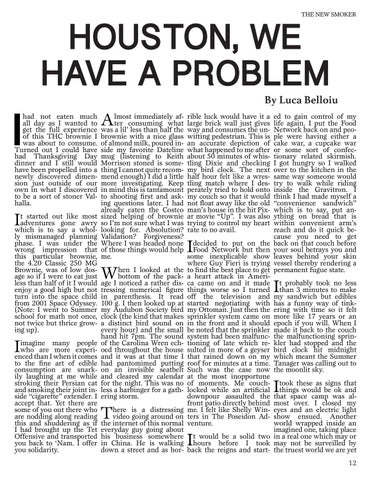 HOUSTON, WE HAVE A PROBLEM

had not eaten much all day as I wanted to get the full experience of this THC brownie I was about to consume. Turned out I could have had Thanksgiving Day dinner and I still would have been propelled into a newly discovered dimension just outside of our own in what I discovered to be a sort of stoner Valhalla.

ly mismanaged planning phase. I was under the wrong impression that this particular brownie, the 4.20 Classic 250 MG Brownie, was of low dosage so if I were to eat just less than half of it I would enjoy a good high but not turn into the space child from 2001 Space Odyssey. (Note: I went to Summer school for math not once, not twice but thrice growing up).

to the fine art of edible consumption are snarkily laughing at me while stroking their Persian cat and smoking their joint inside “cigarette” extender. I accept that. Yet there are some of you out there who are nodding along reading this and shuddering as if I had brought up the Tet Offensive and transported you back to ‘Nam. I offer you solidarity.

lmost immediately af- rible luck would have it a ed to gain control of my A ter consuming what large brick wall just gives life again. I put the Food was a lil’ less than half the way and consumes the un- Network back on and peobrownie with a nice glass of almond milk, poured inside my favorite Dateline mug (listening to Keith Morrison stoned is something I cannot quite recommend enough) I did a little more investigating. Keep in mind this is tantamount to shooting first and asking questions later. I had already eaten the Costco sized helping of brownie so I’m not sure what I was looking for. Absolution? Validation? Forgiveness? Where I was headed none of those things would help me.

witting pedestrian. This is an accurate depiction of what happened to me after about 50 minutes of whistling Dixie and checking my bird clock. The next half hour felt like a wrestling match where I desperately tried to hold onto my couch so that it would not float away like the old man’s house in the hit Pixar movie “Up”. I was also trying to control my heart rate to no avail.

where Guy Fieri is trying to find the best place to get a heart attack in America came on and it made things worse so I turned off the television and started negotiating with my Ottoman. Just then the sprinkler system came on in the front and it should be noted that the sprinkler system had been malfunctioning of late which resulted in more of a geyser that rained down on my roof for minutes at a time. Such was the case now at the most inopportune of moments. Me couchlocked while an artificial downpour assaulted the front patio directly behind here is a distressing me. I felt like Shelly Winvideo going around on ters in The Poseidon Adthe internet of this normal venture. everyday guy going about his business somewhere t would be a solid two in China. He is walking hours before I took down a street and as hor- back the reigns and start-

hen I looked at the bottom of the package I noticed a rather distressing numerical figure in parenthesis. It read 100 g. I then looked up at my Audubon Society bird clock (the kind that makes a distinct bird sound on every hour) and the small hand hit 7pm. The sound of the Carolina Wren echoed throughout the house and it was at that time I had pantomimed putting on an invisible seatbelt and cleared my calendar for the night. This was no less a harbinger for a gathering storm.

ple were having either a cake war, a cupcake war or some sort of confectionary related skirmish. I got hungry so I walked over to the kitchen in the same way someone would try to walk while riding inside the Gravitron. I think I had made myself a “convenience sandwich” which is to say, put anything on bread that is within convenient arm’s reach and do it quick because you need to get back on that couch before your soul betrays you and leaves behind your skin vessel thereby rendering a permanent fugue state.

took no less Imytthanprobably 3 minutes to make sandwich but edibles

has a funny way of tinkering with time so it felt more like 17 years or an epoch if you will. When I made it back to the couch the malfunctioning sprinkler had stopped and the bird clock hit midnight which meant the Summer Tanager was calling out to the moonlit sky.

most over. I closed my eyes and an electric light show ensued. Another world wrapped inside an imagined one, taking place in a real one which may or may not be surveilled by the truest world we are yet 12