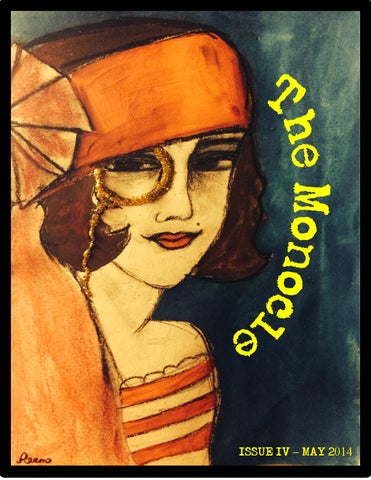 Hello. I am Monocle. If I am not mistaken, I believe we have a mutual friend –

stuff that will really tickle your fancy. (formally called the “Table of Contents”)

Expelled that night from crimson lips ashen ghosts lounge in slumber smoky tendrils aloft midnight garb they stir, and dance, and wander, creeping cancerous in whispering ships curling down corridors to greet the lungs, I inhale her deathly perfume kiss. Transfixed, I drink her in again, a canopy of obsidian strands frames her pallid icy skin, layered thick with paint (her face just another canvass for gifted hands to recreate) I would suck toxins from her tongue if I could peel it all away and bathe in her unadorned mind.

Part IV: The Crew Ten years it’s been, or so they say, Since Damos to his storefront came, His fishing trade had seen its day, Naught left now but the Sockeye name. The Captain saw within his face, The spirit of a loyal man, And all the fish, though few, in place, Prepared as only craftsmen can. In search of hands to man his ship, Young Damos found in him his goal, And offered Sockeye sponsorship, To work as second in control. Thus Sockeye formed the Captain’s crew, And by the Captain since he's stayed, Him owing his profession new, From fisherman to captain’s aide. Not long thereafter Lawrence joined, Found lost in liquor at a bar, Once working as a sailor coined, His better days did seem so far. Old age had drowned his soldier’s might, The Captain thus replied his plea, His skills as sailor still alight, As helmsman he returned to sea. The Captain's Hands, called Left and Right, Were next in line as I am told, They'd caught the helmsman's hawkish sight, Adrift on planks in waters cold. The Right Hand, stronger of the two, Had clung to life lest life let go; Aboard the Phoebe both we drew, And bade them rest in cots below.

Their real names relics of their past, Sad lives in jails and hoodlum bands, Them having fled their cells at last, He christened them as his own Hands. So through their work they could atone, For crimes that they had once begot, And though their freedom now their own, The Captain's aid they ne'er forgot.

The other men, most unemployed, Found hope when Damos gave it them, And as his crew they filled that void, In finding merchants to condemn. A child as well had joined our ranks, Named Morgan, orphaned circus maid, The Captain’s chance she took with thanks, For seas she shed the circus trade. And me? Well, Martin I am called, As lookout I have built my trade: The crow's nest is my lair bald, The spyglass is to me my blade. The seaborne folk had seemed my kin, But Navy life soon had me bored, So Damos let them take me in, Their bold adventures to record.

Half-eaten Peach A fresh yet wilting half-eaten peach is what I am today. Â

42nd street concrete was sweating. I unbuttoned my suit jacket and took it off. An M&M waved and asked for some change that I refused to give. With that, I arrived at the Double Tree.

There he was, sitting on a folding chair, his tie pulled down and his top button loose. He was writing. “What brings you here?” I asked, pushing the executive toe of my suede pumps under his eye-line. He looked at my legs.

“I’m selling myself in a hotel in Times Square.” “How much?” He said he never made a first offer, but I was pretty sure he would give me a good deal. 10

THE ART OF MAKING YOUR CASE

Ms. May is making a strong case for stripes. We learned in Civil Procedure that the way in which you make your case often defines its substance. The “Art of Making Your Case” is about how advocates align their

strategy to their goals. Join us in this issue of The Muckraker as we explore how we can work together to make a case for responsive and fair handling of sexual assault at Columbia, to discover that you have to know why you’re making your case before you make it, and even to argue that you can make a case with a polka-dotted tie. We are also excited to announce a new section -the Soapbox -- that we created to include more voices in our conversations. We solicited responses to Paul Chander's March column that raised the question: how are microaggression campaigns making the case for racial justice? You may be 12 surprised by the answers....