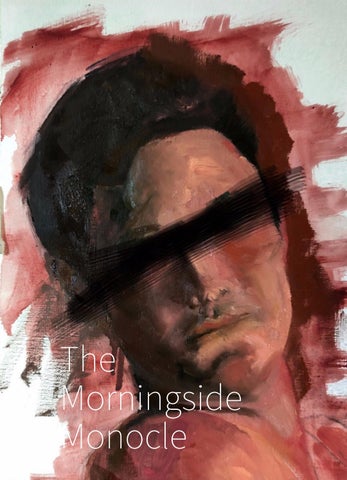 Copyright 2020 ÂŠ by The Morningside Monocle at Columbia Law School. For more information, please visit us at www.themorningsidemonocle.com. ii

Editor’s Note Sitting on the steps of Low Memorial Library, watching students chat over lunch and others hurry to class, one can observe and reflect on the evolving student body of Columbia University over the past several decades. At its founding in 1858, like most other graduate schools of its time, Columbia Law School was exclusively male and white. It would take nearly a century before Elreta Alexander would become the first black woman to graduate from the law school in 1945. Today, in 2020, CLS boasts a vibrant community of which 45% are students of color, 46% female, 19% international students from twenty different countries, and is defined by varied sexual and gender identities and of mixed ages and backgrounds. This Winter Issue of The Morningside Monocle, the first of the decade, is dedicated to the rich and diverse student body of the Law School and community at large. Titled “Across Campus: A Cross-Cultural Perspective,” the special feature of this issue celebrates the meaning of identity, a unique concept to each and every one of our peers. Beginning on page 12, this feature aims to facilitate our personal journeys in understanding our nuanced community, and to encourage achieving higher diversity on campus, perhaps among socioeconomic levels and among faculty. Since it began as the literary component of The Morningside Muckracker in 2013, The Monocle has remained unchanged in its purpose. The Monocle has continued to publish creative talent, free expression, and uncensored thought from the Law School community. For this reason, only a portion of the issue is dedicated to the special theme of diversity, and the rest of the issue showcases a range of topics, including a short story on love and hate. We hope you enjoy this issue’s special stories about home and heartbreak, photographs taken by best friends on Revson Plaza, and art depicting iconic Columbia architecture. We especially hope you find beauty in the pieces of this magazine that reflect the multicolored and enmeshed jigsaw puzzle of our community. As always, we remain indebted to our talented authors and artists, our hard-working editorial board, and most of all, to our readers who fuel our work, and whose spirits, lives, and thoughts serve as our daily inspiration.

Across Campus: A Cross-Cultural Perspective

New Love Chetan Tripathy Dreams are dreams, they bother me, but I succumb to only thee. And while my freedom is caged, To thee I remain a willing slave.

Knishes Rachel Rein My mother bakes knishes for visitors. She takes the soft sunshine mounds of potato and presses them down on parchment paper, tucks pastry corners underneath them carefully, tenderly, like a childhood bedtime ritual. As I grew up I smelled their earthy hearty flavors, the oven a hearth in our home. I watched steam unfurl and waft into the air.

A Homeless Heart Chetan Tripathy Pain is a difficult emotion, Ever since mother died; It has engulfed us all, a growing void that will consume our very beings. The days of my life have passed; I cannot imagine happiness, but what it could be like to have, my family together again, from the time I was born. You have not seen father, A broken soul in a senseless world, In search of the home he built for us all, But without mother, it is lost. He curses and cusses until darkness dawn, For he is unknown to this emotion; He blames all things dark and her death on me, But at times there is silence, and those moments are kind. Who can sanction a man in love, an eternal promise he is unable to break free from, And I wish to be no different, Even if he all he is . . . is was.

Hate Story Samier Saeed I died on impact. A respected journalist with unrealized literary ambitions will write that my “fresh corpse’s limbs formed a morbid origami”; a little girl will forever remember my body as a discarded doll writ life-size; a gossip column will note that I wasn’t wearing my wedding ring. I left the ring in the hotel room, on the nightstand, in plain sight. Has NYPD returned the ring to you? I hope they have. I wish I could see you receive it. I wish I could see you now. Just for a moment. Not because I want to see you, the way I used to, but because I want to reap the fruits of my final act. Revenge, a dish served as cold as my body, lying as it is in the morgue—you get the idea. Just for a bit. Then I’d like to be free of you. Free, libre, aazaad. Unfortunately, I cannot see anything of the world as it churns along now sans me. I am stuck in a View-Master of you-related memories. I remember that, once, my love for you was so passionate and resolute that I couldn’t walk around with you in public for more than five minutes before being gripped by the desire to do you on some strange surface, like the risky pin-strewn counter of a changing room, or the aromatic shelving of a garden nursery. I remember that my desire and affection abated not even during the chemo that stole your fleshy hips and sensual jowls, and bleached your pallor, when I myself, whittled down by worry and sleepless nights at the foot of your bed, started to lose weight and occasionally vomit, becoming so desolate of mojo that one of the doctors joked “I didn’t know cancer was contagious.” I remember you lying in bed waifishly like some latter-Victorian knocked down by consumption. I daily brought in chicken soup with alphabet-shaped noodles, and sat in a little wooden chair by your bedside to hand-feed you, making airplane noises, trying to spell out little pastagrams like “love” in the spoon.

I remember that night during our honeymoon when I divulged to you post-coitally the grief-laden story of my fraught relationship with my childhood dog, Douglas, who only tolerated me, and did not show me the kind of awesome affection a boy would expect from

his childhood dog, and who would often feign sleep when I called him to my side, only leaping at me excitedly and giving me licks when he was hungry, this leading to a cycle of my letting him go hungry for cruelly long periods of time, so that I could get some affection from him, a practice about which I remained guilty for many years hence and which fueled my serial social entrepreneurship, which entrepreneurship I impotently realized had very little positive impact on the world, its main charitable function being the transfer of wealth from very rich people and institutional investors to scores of young software developers and digital marketers from middle and upper-class backgrounds and mostly Ivy League schools. At least they had a lot of student debt to pay off, I at first thought, but then I realized that this only meant that a large chunk of the money got recycled back to financial institutions. Nobody else saw it that way of course. I got accolades for my work, accolades that could not replace the love of Douglas (!). I remember spinning this emotional yarn for you while staring at the jaundiced “cream” color of the hotel room’s ceiling while you lay on your side, propped up on an elbow, facing away from me. You answered by ordering room-service. I remember wishing you had at least laughed at me. (In retrospect, I think I should have gotten a dog instead of you. Would have spared me a lot of grief. And I’d still have a chance to use the Peloton I spent so much money on. Hard to use a Peloton when your legs are broken and your soul is stuck in a fun-house of despair). I remember encountering you by chance during a walk through Union Square Park on a weekday, in that moment the teal of your skirt matching your eyes, presenting your almostperfect legs, a goddess dropped into the middle of a city. It was the best you had looked since the chemo. I tried to do what I thought was a “manly” voice and said “’scuse me, ma’am, but I couldn’t help but noticing you look drop-dead gorgeous.” I remember the surprised invitation of your smile, a child-like combination of wonder and joy. I remember it turning to resigned dismay when you realized it was I who had spoken. I had thought that dying could help me to simply exist. Instead, I endlessly traverse the mobius-strip of our “relationship.” This is not what I expected after I died. It’s a real buzzkill. I might as well fucking still be alive.

Across Campus: A Cros