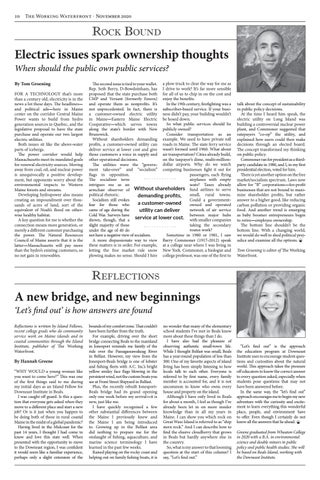 Electric issues spark ownership thoughts When should the public own public services? By Tom Groening FOR A TECHNOLOGY that’s more than a century old, electricity is in the news a lot these days. The headlines— and political ads—here in Maine center on the corridor Central Maine Power wants to build from hydro generation sources in Quebec, and the legislative proposal to have the state purchase and operate our two largest electric utilities. Both issues sit like the above-water parts of icebergs. The power corridor would help Massachusetts meet its mandated goals for renewal electricity sources. Moving away from coal, oil, and nuclear power is unequivocally a positive development, but opponents worry about the environmental impacts to Western Maine forests and streams. Developing hydropower also means creating an impoundment over thousands of acres of land, sort of the equivalent of Noah’s flood on otherwise healthy habitat. A key question for me is whether the connection means more generation, or merely a different customer purchasing the power. The Natural Resources Council of Maine asserts that it is the latter—Massachusetts will pay more than the hydro’s existing customers, so no net gain in renewables.

The second issue is tied to your wallet. a plow truck to clear the way for me as Rep. Seth Berry, D-Bowdoinham, has I drive to work? It’s far more sensible proposed that the state purchase both for all of us to chip in on the cost and CMP and Versant (formerly Emera) enjoy the benefits. In the 19th century, firefighting was a and operate them as nonprofits. It’s not unprecedented. In fact, there is subscriber-based service. If your busia customer-owned electric utility ness didn’t pay, your building wouldn’t in Maine—Eastern Maine Electric be hosed down. So what public services should be Cooperative—which serves towns along the state’s border with New publicly owned? Consider transportation as an Brunswick. Without shareholders demanding example. We used to have private toll profits, a customer-owned utility can roads in Maine. The state ferry service deliver service at lower cost and give wasn’t formed until 1960. What about those customers a voice in supply and air transportation? Cities already build, on the taxpayer’s dime, multi-millionother operational decisions. The utilities wave the “govern- dollar airports. Why do we watch ment take-over” and “socialism” competing businesses fight it out for passengers, each flying flags in opposition. airplanes with empty The socialism term seats? Taxes already intrigues me as an armchair observer of Without shareholders fund airlines to serve small, rural towns. political rhetoric. demanding profits, Could a governmentSocialism still evokes a customer-owned owned and operated fear for those who network of air service came of age during the utility can deliver between major hubs Cold War. Surveys have service at lower cost. with smaller companies shown, though, that a taking the secondary slight majority of those routes work? under the age of 40 do Sometime in 1980 or 1981, I saw not have a negative view of socialism. A more dispassionate way to view Barry Commoner (1917-2012) speak these matters is in order. For example, at a college near where I was living in letting the free market rule snow New York. Commoner, a biologist and plowing makes no sense. Should I hire college professor, was one of the first to

talk about the concept of sustainability in public policy decisions. At the time I heard him speak, the electric utility on Long Island was building a controversial nuclear power plant, and Commoner suggested that ratepayers “co-op” the utility, and explained how users could then make decisions through an elected board. The concept transformed my thinking on public policy. Commoner ran for president as a thirdparty candidate in 1980, and I, in my first presidential election, voted for him. There is yet another option on the free market/socialism spectrum. Laws now allow for “B” corporations—for-profit businesses that are not bound to maximize shareholder profits, but rather answer to a higher good, like reducing carbon pollution or providing organic food. And another trend is emerging as baby boomer entrepreneurs begin to retire—employee ownership. The bottom line shouldn’t be the bottom line. With a changing world, we would do well to shed political prejudice and examine all the options. Tom Groening is editor of The Working Waterfront.

A new bridge, and new beginnings ‘Let’s find out’ is how answers are found Reflections is written by Island Fellows, recent college grads who do community service work on Maine islands and in coastal communities through the Island Institute, publisher of The Working Waterfront.

By Hannah Greene “WHY WOULD a young woman like you want to come here?” This was one of the first things said to me during my initial days as an Island Fellow for Downeast Institute in Beals. I was caught off guard. Is this a question that everyone gets asked when they move to a different place and start a new job? Or is it just when you happen to be doing both of those in rural coastal Maine in the midst of a global pandemic? Having lived in the Midcoast for the past 14 years, I thought I had come to know and love this state well. When presented with the opportunity to move to the Downeast region, I was confident it would seem like a familiar experience, perhaps only a slight extension of the

bounds of my comfort zone. That couldn’t have been further from the truth. For example, driving over the short bridge connecting Beals to the mainland in Jonesport reminds me faintly of the ride over the Passagassawakeag River in Belfast. However, my view from the Jonesport-Beals bridge is one of lobster and fishing fleets with A.C. Inc.’s bright yellow smiley face flags blowing in the persistent wind, not the custom boats you see at Front Street Shipyard in Belfast. Plus, the recently rebuilt JonesportBeals bridge had its grand opening only one week before my arrival—it is new, just like me. I have quickly recognized a few other substantial differences between the Maine I previously knew and the Maine I am being introduced to. Growing up in the Belfast area did nothing to prepare me for the onslaught of fishing, aquaculture, and marine science terminology I have learned in the past few weeks. Raised playing on the rocky coast and helping out on family fishing boats, it is

no wonder that many of the elementary school students I’ve met in Beals know more about these things than I do. I have also had the pleasure of observing authentic small-town life. While I thought Belfast was small, Beals has a year-round population of less than 500. One of my favorite aspects of island living has been simply listening to how locals talk to each other. Everyone is referred to by first name, every family member is accounted for, and it is not uncommon to know who owns every house and property on the island. Although I have only lived in Beals for about a month, I feel as though I’ve already been let in on more insider knowledge than in all my years in Maine. I can show you which rock on Great Wass Island is referred to as “ship stern rock.” And I can describe how to find the elusive cloudberry that grows in Beals but hardly anywhere else in the country. So, what is my answer to that looming question at the start of this column? I say, “Let’s find out.”

“Let’s find out” is the approach the education program at Downeast Institute uses to encourage student questions and curiosities about the natural world. This approach takes the pressure off educators to know the correct answer to every question asked, especially when students pose questions that may not have been answered before. In the same way, the “let’s find out” approach encourages me to begin my new adventure with the curiosity and excitement to learn everything this wonderful place, people, and environment have to offer. Even though I certainly do not know all the answers that lie ahead. Greene graduated from Wheaton College in 2020 with a B.A. in environmental science and double minors in public policy and public health studies. She will be based on Beals Island, working with the Downeast Institute. 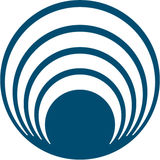