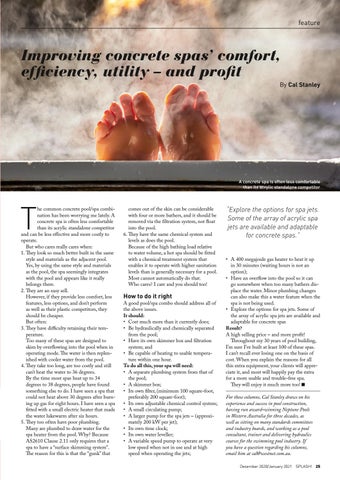 he common concrete pool/spa combination has been worrying me lately. A concrete spa is often less comfortable than its acrylic standalone competitor and can be less effective and more costly to operate. But who cares really cares when: 1. They look so much better built in the same style and materials as the adjacent pool. Yes, by using the same style and materials as the pool, the spa seemingly integrates with the pool and appears like it really belongs there. 2. They are an easy sell. However, if they provide less comfort, less features, less options, and don’t perform as well as their plastic competitors, they should be cheaper. But often: 3. They have difficulty retaining their temperature. Too many of these spas are designed to skim by overflowing into the pool when in operating mode. The water is then replenished with cooler water from the pool. 4. They take too long, are too costly and still can’t heat the water to 36 degrees. By the time most spas heat up to 34 degrees to 38 degrees, people have found something else to do. I have seen a spa that could not heat above 30 degrees after burning up gas for eight hours. I have seen a spa fitted with a small electric heater that made the water lukewarm after six hours. 5. They too often have poor plumbing. Many are plumbed to draw water for the spa heater from the pool. Why? Because AS2610 Clause 2.11 only requires that a spa to have a “surface skimming system”. The reason for this is that the “gunk” that

comes out of the skin can be considerable with four or more bathers, and it should be removed via the filtration system, not float into the pool. 6. They have the same chemical system and levels as does the pool. Because of the high bathing load relative to water volume, a hot spa should be fitted with a chemical treatment system that enables it to operate with higher sanitation levels than is generally necessary for a pool. Most cannot automatically do that. Who cares? I care and you should too!

How to do it right

A good pool/spa combo should address all of the above issues. It should: • Cost much more than it currently does; • Be hydraulically and chemically separated from the pool; • Have its own skimmer box and filtration system; and • Be capable of heating to usable temperature within one hour. To do all this, your spa will need: • A separate plumbing system from that of the pool; • A skimmer box; • Its own filter, (minimum 100 square-foot, preferably 200 square-foot); • Its own adjustable chemical control system; • A small circulating pump; • A larger pump for the spa jets – (approximately 200 kW per jet); • Its own time clock; • Its own water leveller; • A variable speed pump to operate at very low speed when not in use and at high speed when operating the jets;