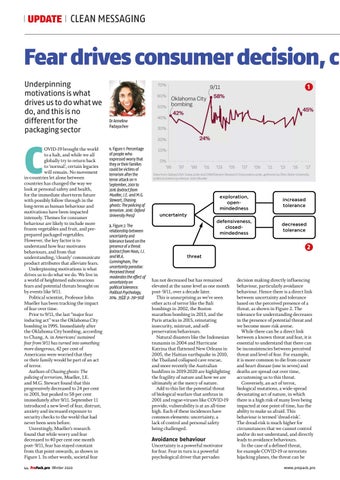 Fear drives consumer decision, cl Underpinning motivations is what drives us to do what we do, and this is no different for the packaging sector

OVID-19 brought the world to a halt, and while we all globally try to return back to ‘normal’, certain legacies will remain. No movement in-countries let alone between countries has changed the way we look at personal safety and health, for the immediate short-term future with possibly follow through in the long-term as human behaviour and motivations have been impacted intensely. Themes for consumer behaviour are likely to include more frozen vegetables and fruit, and preprepared packaged vegetables. However, the key factor is to understand how fear motivates behaviours, and from that understanding, ‘cleanly’ communicate product attributes that alleviate fears. Underpinning motivations is what drives us to do what we do. We live in a world of heightened subconscious fears and potential threats brought on by events like 9/11. Political scientist, Professor John Mueller has been tracking the impact of fear over time. Prior to 9/11, the last “major fear inducing act” was the Oklahoma City bombing in 1995. Immediately after the Oklahoma City bombing, according to Chang, A. in Americans’ sustained fear from 9/11 has turned into something more dangerous, 42 per cent of Americans were worried that they or their family would be part of an act of terror. Authors of Chasing ghosts: The policing of terrorism, Mueller, J.E. and M.G. Stewart found that this progressively decreased to 24 per cent in 2001, but peaked to 58 per cent immediately after 9/11. September 11 introduced a new level of fear, distrust, anxiety and increased exposure to security checks to the world that had never been seen before. Unrestingly, Mueller’s research found that while worry and fear decreased to 40 per cent one month post- 9/11, fear has stayed constant from that point onwards, as shown in Figure 1. In other words, societal fear 44 ProPack.pro Winter 2020

1. Figure 1: Percentage of people who expressed worry that they or their families could be victims of terrorism after the terror attack on 11 September, 2001 to 2016 (extract from Mueller, J.E. and M.G. Stewart, Chasing ghosts: The policing of terrorism. 2016: Oxford University Press) 2. Figure 2: The relationship between uncertainty and tolerance based on the presence of a threat (extract from Haas, I.J. and W.A. Cunningham, The uncertainty paradox: Perceived threat moderates the effect of uncertainty on political tolerance. Political Psychology, 2014. 35(2): p. 291-302)

has not decreased but has remained elevated at the same level as one month post- 9/11, over a decade later. This is unsurprising as we’ve seen other acts of terror like the Bali bombings in 2002, the Boston marathon bombing in 2013, and the Paris attacks in 2015, reinstating insecurity, mistrust, and selfpreservation behaviours. Natural disasters like the Indonesian tsunamis in 2004 and Hurricane Katrina that flattened New Orleans in 2005, the Haitian earthquake in 2010, the Thailand collapsed cave rescue, and more recently the Australian bushfires in 2019-2020 are highlighting the fragility of nature and how we are ultimately at the mercy of nature. Add to this list the potential threat of biological warfare that anthrax in 2001 and rogue-viruses like COVID-19 provide, vulnerability is at an all-time high. Each of these incidences have common elements: uncertainty, a lack of control and personal safety being challenged.

decision making directly influencing behaviour, particularly avoidance behaviour. Hence there is a direct link between uncertainty and tolerance based on the perceived presence of a threat, as shown in Figure 2. The tolerance for understanding decreases in the presence of potential threat and we become more risk averse. While there can be a direct link between a known threat and fear, it is essential to understand that there can be inconsistencies between perceived threat and level of fear. For example, it is more common to die from cancer and heart disease (one in seven) and deaths are spread out over time, accustoming us to this threat. Conversely, an act of terror, biological mutations, a wide-spread devastating act of nature, in which there is a high risk of many lives being impacted at one point of time, has the ability to make us afraid. This behaviour is termed ‘dread-risk’. The dread-risk is much higher for circumstances that we cannot control and/or do not understand, and directly leads to avoidance behaviours. In the case of a defined threat, for example COVID-19 or terrorists hijacking planes, the threat can be www.propack.pro