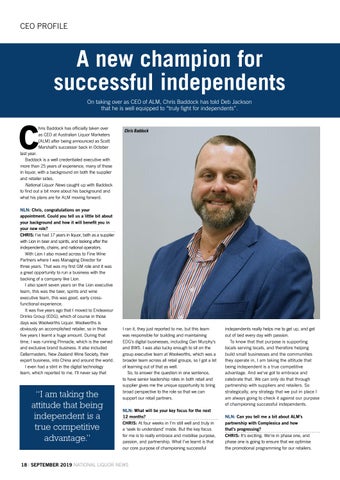 A new champion for successful independents On taking over as CEO of ALM, Chris Baddock has told Deb Jackson that he is well equipped to “truly fight for independents”.

last year. Baddock is a well credentialed executive with more than 25 years of experience, many of those in liquor, with a background on both the supplier and retailer sides. National Liquor News caught up with Baddock to find out a bit more about his background and what his plans are for ALM moving forward. NLN: Chris, congratulations on your appointment. Could you tell us a little bit about your background and how it will benefit you in your new role? CHRIS: I’ve had 17 years in liquor, both as a supplier with Lion in beer and spirits, and looking after the independents, chains, and national operators. With Lion I also moved across to Fine Wine Partners where I was Managing Director for three years. That was my first GM role and it was a great opportunity to run a business with the backing of a company like Lion. I also spent seven years on the Lion executive team, this was the beer, spirits and wine executive team, this was good, early crossfunctional experience. It was five years ago that I moved to Endeavour Drinks Group (EDG), which of course in those days was Woolworths Liquor. Woolworths is obviously an accomplished retailer, so in those five years I learnt a huge amount. During that time, I was running Pinnacle, which is the owned and exclusive brand business. It also included Cellarmasters, New Zealand Wine Society, their export business, into China and around the world. I even had a stint in the digital technology team, which reported to me. I’ll never say that

“I am taking the attitude that being independent is a true competitive advantage.”

I ran it, they just reported to me, but this team was responsible for building and maintaining EDG’s digital businesses, including Dan Murphy’s and BWS. I was also lucky enough to sit on the group executive team at Woolworths, which was a broader team across all retail groups, so I got a lot of learning out of that as well. So, to answer the question in one sentence, to have senior leadership roles in both retail and supplier gives me the unique opportunity to bring broad perspective to the role so that we can support our retail partners. NLN: What will be your key focus for the next 12 months? CHRIS: At four weeks in I’m still well and truly in a ‘seek to understand’ mode. But the key focus for me is to really embrace and mobilise purpose, passion, and partnership. What I’ve learnt is that our core purpose of championing successful

independents really helps me to get up, and get out of bed every day with passion. To know that that purpose is supporting locals serving locals, and therefore helping build small businesses and the communities they operate in, I am taking the attitude that being independent is a true competitive advantage. And we’ve got to embrace and celebrate that. We can only do that through partnership with suppliers and retailers. So strategically, any strategy that we put in place I am always going to check it against our purpose of championing successful independents. NLN: Can you tell me a bit about ALM’s partnership with Complexica and how that’s progressing? CHRIS: It’s exciting. We’re in phase one, and phase one is going to ensure that we optimise the promotional programming for our retailers.

National Liquor News prides itself on delivering Australia’s liquor industry the most relevant and accurate news across the trade. It includes features on industry trends and categories, product information and issues impacting the trade across the country, as well as regular news and profile pages.