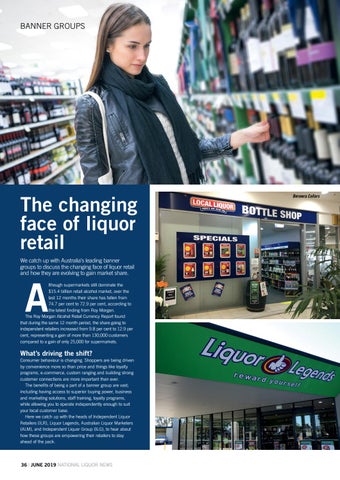 lthough supermarkets still dominate the $15.4 billion retail alcohol market, over the last 12 months their share has fallen from 74.7 per cent to 72.9 per cent, according to the latest finding from Roy Morgan. The Roy Morgan Alcohol Retail Currency Report found that during the same 12 month period, the share going to independent retailers increased from 9.8 per cent to 12.9 per cent, representing a gain of more than 130,000 customers compared to a gain of only 25,000 for supermarkets.

Whatâ&#x20AC;&#x2122;s driving the shift? Consumer behaviour is changing. Shoppers are being driven by convenience more so than price and things like loyalty programs, e-commerce, custom ranging and building strong customer connections are more important than ever. The benefits of being a part of a banner group are vast; including having access to superior buying power, business and marketing solutions, staff training, loyalty programs, while allowing you to operate independently enough to suit your local customer base. Here we catch up with the heads of Independent Liquor Retailers (ILR), Liquor Legends, Australian Liquor Marketers (ALM), and Independent Liquor Group (ILG), to hear about how these groups are empowering their retailers to stay ahead of the pack.