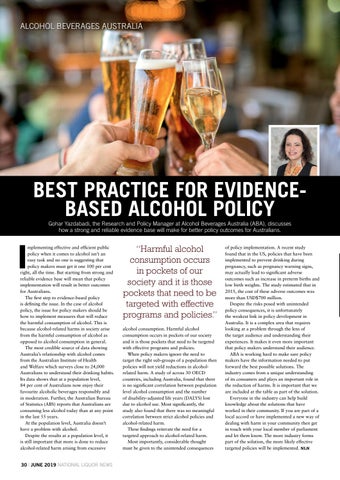 BEST PRACTICE FOR EVIDENCEBASED ALCOHOL POLICY Gohar Yazdabadi, the Research and Policy Manager at Alcohol Beverages Australia (ABA), discusses how a strong and reliable evidence base will make for better policy outcomes for Australians.

mplementing effective and efficient public policy when it comes to alcohol isn’t an easy task and no one is suggesting that policy makers must get it one 100 per cent right, all the time. But starting from strong and reliable evidence base will mean that policy implementation will result in better outcomes for Australians. The first step to evidence-based policy is defining the issue. In the case of alcohol policy, the issue for policy makers should be how to implement measures that will reduce the harmful consumption of alcohol. This is because alcohol-related harms in society arise from the harmful consumption of alcohol as opposed to alcohol consumption in general. The most credible source of data showing Australia’s relationship with alcohol comes from the Australian Institute of Health and Welfare which surveys close to 24,000 Australians to understand their drinking habits. Its data shows that at a population level, 84 per cent of Australians now enjoy their favourite alcoholic beverages responsibly and in moderation. Further, the Australian Bureau of Statistics (ABS) reports that Australians are consuming less alcohol today than at any point in the last 55 years. At the population level, Australia doesn’t have a problem with alcohol. Despite the results at a population level, it is still important that more is done to reduce alcohol-related harm arising from excessive

of policy implementation. A recent study found that in the US, policies that have been implemented to prevent drinking during pregnancy, such as pregnancy warning signs, may actually lead to significant adverse outcomes such as increase in preterm births and low birth weights. The study estimated that in 2015, the cost of these adverse outcomes was more than USD$700 million. Despite the risks posed with unintended policy consequences, it is unfortunately the weakest link in policy development in Australia. It is a complex area that requires looking at a problem through the lens of the target audience and understanding their experiences. It makes it even more important that policy makers understand their audience. ABA is working hard to make sure policy makers have the information needed to put forward the best possible solutions. The industry comes from a unique understanding of its consumers and plays an important role in the reduction of harms. It is important that we are included at the table as part of the solution. Everyone in the industry can help build knowledge about the solutions that have worked in their community. If you are part of a local accord or have implemented a new way of dealing with harm in your community then get in touch with your local member of parliament and let them know. The more industry forms part of the solution, the more likely effective targeted policies will be implemented.