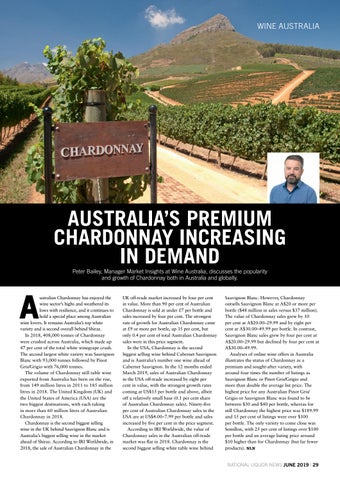 AUSTRALIA’S PREMIUM CHARDONNAY INCREASING IN DEMAND Peter Bailey, Manager Market Insights at Wine Australia, discusses the popularity and growth of Chardonnay both in Australia and globally.

ustralian Chardonnay has enjoyed the wine sector’s highs and weathered its lows with resilience, and it continues to hold a special place among Australian wine lovers. It remains Australia’s top white variety and is second overall behind Shiraz. In 2018, 408,000 tonnes of Chardonnay were crushed across Australia, which made up 47 per cent of the total white winegrape crush. The second largest white variety was Sauvignon Blanc with 93,000 tonnes followed by Pinot Gris/Grigio with 76,000 tonnes. The volume of Chardonnay still table wine exported from Australia has been on the rise, from 149 million litres in 2011 to 185 million litres in 2018. The United Kingdom (UK) and the United States of America (USA) are the two biggest destinations, with each taking in more than 60 million litres of Australian Chardonnay in 2018. Chardonnay is the second biggest selling wine in the UK behind Sauvignon Blanc and is Australia’s biggest selling wine in the market ahead of Shiraz. According to IRI Worldwide, in 2018, the sale of Australian Chardonnay in the