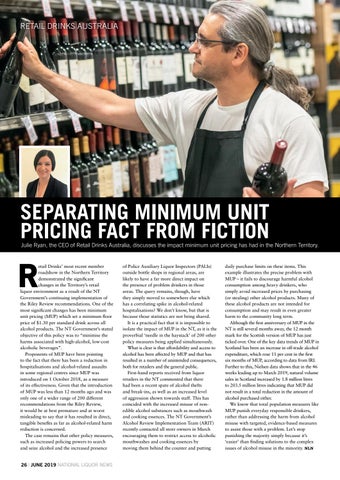 Julie Ryan, the CEO of Retail Drinks Australia, discusses the impact minimum unit pricing has had in the Northern Territory.

etail Drinks’ most recent member roadshow in the Northern Territory demonstrated the significant changes in the Territory’s retail liquor environment as a result of the NT Government’s continuing implementation of the Riley Review recommendations. One of the most significant changes has been minimum unit pricing (MUP) which set a minimum floor price of $1.30 per standard drink across all alcohol products. The NT Government’s stated objective of this policy was to “minimise the harms associated with high-alcohol, low-cost alcoholic beverages”. Proponents of MUP have been pointing to the fact that there has been a reduction in hospitalisations and alcohol-related assaults in some regional centres since MUP was introduced on 1 October 2018, as a measure of its effectiveness. Given that the introduction of MUP was less than 12 months ago and was only one of a wider range of 200 different recommendations from the Riley Review, it would be at best premature and at worst misleading to say that it has resulted in direct, tangible benefits as far as alcohol-related harm reduction is concerned. The case remains that other policy measures, such as increased policing powers to search and seize alcohol and the increased presence

of Police Auxiliary Liquor Inspectors (PALIs) outside bottle shops in regional areas, are likely to have a far more direct impact on the presence of problem drinkers in those areas. The query remains, though, have they simply moved to somewhere else which has a correlating spike in alcohol-related hospitalisations? We don’t know, but that is because those statistics are not being shared. It is a practical fact that it is impossible to isolate the impact of MUP in the NT, as it is the proverbial ‘needle in the haystack’ of 200 other policy measures being applied simultaneously. What is clear is that affordability and access to alcohol has been affected by MUP and that has resulted in a number of unintended consequences, both for retailers and the general public. First-hand reports received from liquor retailers in the NT commented that there had been a recent spate of alcohol thefts and break-ins, as well as an increased level of aggression shown towards staff. This has coincided with the increased misuse of nonedible alcohol substances such as mouthwash and cooking essences. The NT Government’s Alcohol Review Implementation Team (ARIT) recently contacted all store owners in March encouraging them to restrict access to alcoholic mouthwashes and cooking essences by moving them behind the counter and putting

daily purchase limits on these items. This example illustrates the precise problem with MUP – it fails to discourage harmful alcohol consumption among heavy drinkers, who simply avoid increased prices by purchasing (or stealing) other alcohol products. Many of these alcohol products are not intended for consumption and may result in even greater harm to the community long term. Although the first anniversary of MUP in the NT is still several months away, the 12 month mark for the Scottish version of MUP has just ticked over. One of the key data trends of MUP in Scotland has been an increase in off-trade alcohol expenditure, which rose 11 per cent in the first six months of MUP, according to data from IRI. Further to this, Nielsen data shows that in the 46 weeks leading up to March 2019, natural volume sales in Scotland increased by 1.8 million litres to 203.5 million litres indicating that MUP did not result in a total reduction in the amount of alcohol purchased either. We know that total population measures like MUP punish everyday responsible drinkers, rather than addressing the harm from alcohol misuse with targeted, evidence-based measures to assist those with a problem. Let’s stop punishing the majority simply because it’s ‘easier’ than finding solutions to the complex issues of alcohol misuse in the minority.