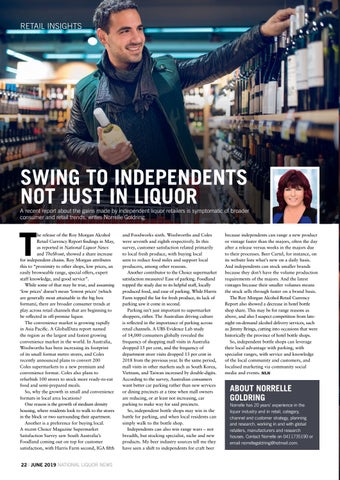 SWING TO INDEPENDENTS NOT JUST IN LIQUOR

A recent report about the gains made by independent liquor retailers is symptomatic of broader consumer and retail trends, writes Norrelle Goldring.

he release of the Roy Morgan Alcohol Retail Currency Report findings in May, as reported in National Liquor News and TheShout, showed a share increase for independent chains. Roy Morgan attributes this to “proximity to other shops, low prices, an easily browseable range, special offers, expert staff knowledge, and good service”. While some of that may be true, and assuming ‘low prices’ doesn’t mean ‘lowest prices’ (which are generally most attainable in the big box formats), there are broader consumer trends at play across retail channels that are beginning to be reflected in off-premise liquor. The convenience market is growing rapidly in Asia Pacific. A GlobalData report named the region as the largest and fastest growing convenience market in the world. In Australia, Woolworths has been increasing its footprint of its small format metro stores, and Coles recently announced plans to convert 200 Coles supermarkets to a new premium and convenience format. Coles also plans to refurbish 100 stores to stock more ready-to-eat food and semi-prepared meals. So, why the growth in small and convenience formats in local area locations? One reason is the growth of medium density housing, where residents look to walk to the stores in the block or two surrounding their apartment. Another is a preference for buying local. A recent Choice Magazine Supermarket Satisfaction Survey saw South Australia’s Foodland coming out on top for customer satisfaction, with Harris Farm second, IGA fifth

and Foodworks sixth. Woolworths and Coles were seventh and eighth respectively. In this survey, customer satisfaction related primarily to local fresh produce, with buying local seen to reduce food miles and support local producers, among other reasons. Another contributor to the Choice supermarket satisfaction measures? Ease of parking. Foodland topped the study due to its helpful staff, locally produced food, and ease of parking. While Harris Farm topped the list for fresh produce, its lack of parking saw it come in second. Parking isn’t just important to supermarket shoppers, either. The Australian driving culture is reflected in the importance of parking across retail channels. A UBS Evidence Lab study of 14,000 consumers globally revealed the frequency of shopping mall visits in Australia dropped 15 per cent, and the frequency of department store visits dropped 13 per cent in 2018 from the previous year. In the same period, mall visits in other markets such as South Korea, Vietnam, and Taiwan increased by double-digits. According to the survey, Australian consumers want better car parking rather than new services or dining precincts at a time when mall owners are reducing, or at least not increasing, car parking to make way for said precincts. So, independent bottle shops may win in the battle for parking, and when local residents can simply walk to the bottle shop. Independents can also win range wars – not breadth, but stocking specialist, niche and new products. My beer industry sources tell me they have seen a shift to independents for craft beer

because independents can range a new product or vintage faster than the majors, often the day after a release versus weeks in the majors due to their processes. Beer Cartel, for instance, on its website lists what’s new on a daily basis. And independents can stock smaller brands because they don’t have the volume production requirements of the majors. And the latest vintages because their smaller volumes means the stock sells through faster on a brand basis. The Roy Morgan Alcohol Retail Currency Report also showed a decrease in hotel bottle shop share. This may be for range reasons as above, and also I suspect competition from latenight on-demand alcohol delivery services, such as Jimmy Brings, cutting into occasions that were historically the province of hotel bottle shops. So, independent bottle shops can leverage their local advantage with parking, with specialist ranges, with service and knowledge of the local community and customers, and localised marketing via community social media and events.

ABOUT NORRELLE GOLDRING Norrelle has 20 years’ experience in the liquor industry and in retail, category, channel and customer strategy, planning and research, working in and with global retailers, manufacturers and research houses. Contact Norrelle on 0411735190 or email norrellegoldring@hotmail.com.