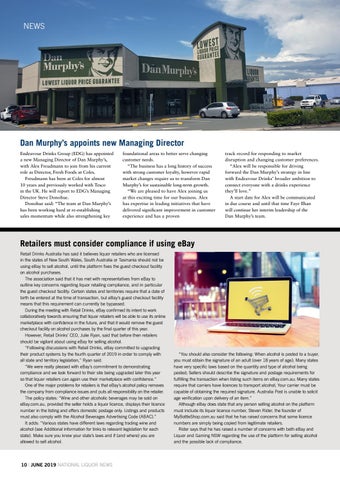 foundational areas to better serve changing customer needs. “The business has a long history of success with strong customer loyalty, however rapid market changes require us to transform Dan Murphy’s for sustainable long-term growth. “We are pleased to have Alex joining us at this exciting time for our business. Alex has expertise in leading initiatives that have delivered significant improvement in customer experience and has a proven

track record for responding to market disruption and changing customer preferences. “Alex will be responsible for driving forward the Dan Murphy’s strategy in line with Endeavour Drinks’ broader ambition to connect everyone with a drinks experience they’ll love.” A start date for Alex will be communicated in due course and until that time Faye Ilhan will continue her interim leadership of the Dan Murphy’s team.

Retailers must consider compliance if using eBay Retail Drinks Australia has said it believes liquor retailers who are licensed in the states of New South Wales, South Australia or Tasmania should not be using eBay to sell alcohol, until the platform fixes the guest checkout facility on alcohol purchases. The association said that it has met with representatives from eBay to outline key concerns regarding liquor retailing compliance, and in particular the guest checkout facility. Certain states and territories require that a date of birth be entered at the time of transaction, but eBay’s guest checkout facility means that this requirement can currently be bypassed. During the meeting with Retail Drinks, eBay confirmed its intent to work collaboratively towards ensuring that liquor retailers will be able to use its online marketplace with confidence in the future, and that it would remove the guest checkout facility on alcohol purchases by the final quarter of this year. However, Retail Drinks’ CEO, Julie Ryan, said that before then retailers should be vigilant about using eBay for selling alcohol. “Following discussions with Retail Drinks, eBay committed to upgrading their product systems by the fourth quarter of 2019 in order to comply with all state and territory legislation,” Ryan said. “We were really pleased with eBay’s commitment to demonstrating compliance and we look forward to their site being upgraded later this year so that liquor retailers can again use their marketplace with confidence.” One of the major problems for retailers is that eBay’s alcohol policy removes the company from compliance issues and puts all responsibility on the retailer. The policy states: “Wine and other alcoholic beverages may be sold on eBay.com.au, provided the seller holds a liquor licence, displays their licence number in the listing and offers domestic postage only. Listings and products must also comply with the Alcohol Beverages Advertising Code (ABAC).” It adds: “Various states have different laws regarding trading wine and alcohol (see Additional information for links to relevant legislation for each state). Make sure you know your state’s laws and if (and where) you are allowed to sell alcohol.

“You should also consider the following: When alcohol is posted to a buyer, you must obtain the signature of an adult (over 18 years of age); Many states have very specific laws based on the quantity and type of alcohol being posted; Sellers should describe the signature and postage requirements for fulfilling the transaction when listing such items on eBay.com.au; Many states require that carriers have licences to transport alcohol; Your carrier must be capable of obtaining the required signature. Australia Post is unable to solicit age verification upon delivery of an item.” Although eBay does state that any person selling alcohol on the platform must include its liquor licence number, Steven Rider, the founder of MyBottleShop.com.au said that he has raised concerns that some licence numbers are simply being copied from legitimate retailers. Rider says that he has raised a number of concerns with both eBay and Liquor and Gaming NSW regarding the use of the platform for selling alcohol and the possible lack of compliance.