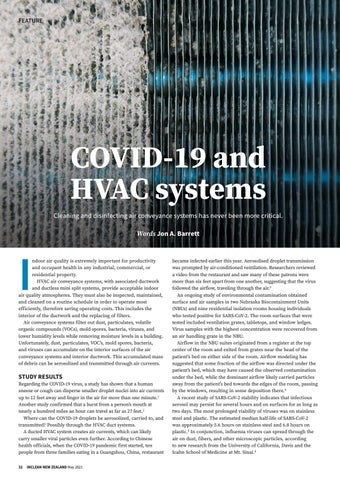 ndoor air quality is extremely important for productivity and occupant health in any industrial, commercial, or residential property. HVAC air conveyance systems, with associated ductwork and ductless mini split systems, provide acceptable indoor air quality atmospheres. They must also be inspected, maintained, and cleaned on a routine schedule in order to operate most efficiently, therefore saving operating costs. This includes the interior of the ductwork and the replacing of filters. Air conveyance systems filter out dust, particulates, volatile organic compounds (VOCs), mold spores, bacteria, viruses, and lower humidity levels while removing moisture levels in a building. Unfortunately, dust, particulates, VOC’s, mold spores, bacteria, and viruses can accumulate on the interior surfaces of the air conveyance systems and interior ductwork. This accumulated mass of debris can be aerosolized and transmitted through air currents.

STUDY RESULTS Regarding the COVID-19 virus, a study has shown that a human sneeze or cough can disperse smaller droplet nuclei into air currents up to 12 feet away and linger in the air for more than one minute.1 Another study confirmed that a burst from a person’s mouth at nearly a hundred miles an hour can travel as far as 27 feet.2 Where can the COVID-19 droplets be aerosolized, carried to, and transmitted? Possibly through the HVAC duct systems. A ducted HVAC system creates air currents, which can likely carry smaller viral particles even further. According to Chinese health officials, when the COVID-19 pandemic first started, ten people from three families eating in a Guangzhou, China, restaurant 32 INCLEAN NEW ZEALAND May 2021

became infected earlier this year. Aerosolised droplet transmission was prompted by air-conditioned ventilation. Researchers reviewed a video from the restaurant and saw many of these patrons were more than six feet apart from one another, suggesting that the virus followed the airflow, traveling through the air.3 An ongoing study of environmental contamination obtained surface and air samples in two Nebraska Biocontainment Units (NBUs) and nine residential isolation rooms housing individuals who tested positive for SARS-CoV-2. The room surfaces that were tested included ventilation grates, tabletops, and window ledges. Virus samples with the highest concentration were recovered from an air handling grate in the NBU. Airflow in the NBU suites originated from a register at the top center of the room and exited from grates near the head of the patient’s bed on either side of the room. Airflow modeling has suggested that some fraction of the airflow was directed under the patient’s bed, which may have caused the observed contamination under the bed, while the dominant airflow likely carried particles away from the patient’s bed towards the edges of the room, passing by the windows, resulting in some deposition there.4 A recent study of SARS-CoV-2 stability indicates that infectious aerosol may persist for several hours and on surfaces for as long as two days. The most prolonged viability of viruses was on stainless steel and plastic. The estimated median half-life of SARS-CoV-2 was approximately 5.6 hours on stainless steel and 6.8 hours on plastic.5 In conjunction, influenza viruses can spread through the air on dust, fibers, and other microscopic particles, according to new research from the University of California, Davis and the Icahn School of Medicine at Mt. Sinai.6