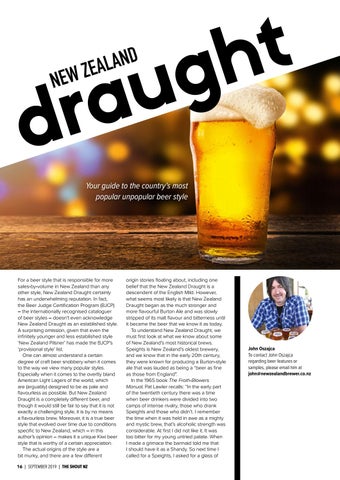 Your guide to the country’s most popular unpopular beer style

For a beer style that is responsible for more sales-by-volume in New Zealand than any other style, New Zealand Draught certainly has an underwhelming reputation. In fact, the Beer Judge Certification Program (BJCP) – the internationally recognised cataloguer of beer styles – doesn’t even acknowledge New Zealand Draught as an established style. A surprising omission, given that even the infinitely younger and less established style ‘New Zealand Pilsner’ has made the BJCP’s ‘provisional style’ list. One can almost understand a certain degree of craft beer snobbery when it comes to the way we view many popular styles. Especially when it comes to the overtly bland American Light Lagers of the world, which are (arguably) designed to be as pale and flavourless as possible. But New Zealand Draught is a completely different beer, and though it would still be fair to say that it is not exactly a challenging style, it is by no means a flavourless brew. Moreover, it is a true beer style that evolved over time due to conditions specific to New Zealand, which – in this author’s opinion – makes it a unique Kiwi beer style that is worthy of a certain appreciation. The actual origins of the style are a bit murky, and there are a few different 16  | SEPTEMBER 2019  |  THE SHOUT NZ

origin stories floating about, including one belief that the New Zealand Draught is a descendent of the English Mild. However, what seems most likely is that New Zealand Draught began as the much stronger and more flavourful Burton Ale and was slowly stripped of its malt flavour and bitterness until it became the beer that we know it as today. To understand New Zealand Draught, we must first look at what we know about some of New Zealand’s most historical brews. Speights is New Zealand’s oldest brewery, and we know that in the early 20th century, they were known for producing a Burton-style ale that was lauded as being a “beer as fine as those from England”. In the 1965 book The Froth-Blowers Manual, Pat Lawler recalls: “In the early part of the twentieth century there was a time when beer drinkers were divided into two camps of intense rivalry, those who drank Speights and those who didn’t. I remember the time when it was held in awe as a mighty and mystic brew, that’s alcoholic strength was considerable. At first I did not like it. It was too bitter for my young untried palate. When I made a grimace the barmaid told me that I should have it as a Shandy. So next time I called for a Speights, I asked for a glass of

John Oszajca To contact John Oszajca regarding beer features or samples, please email him at john@newzealandbrewer.co.nz

Hospitality Business is New Zealand’s independent source of news, insight, business advice and opinion for the hospitality and liquor sectors. With a circulation of more than 8,000 key decision makers, Hospitality Business provides its readers with all the information they need to grow their businesses and run their operations more effectively. The hospitality market is one of the best-performing sectors of New Zealand’s economy, worth an estimated $18bn annually and growing fast – and Hospitality Business aims to help readers take advantage of the opportunities and keep abreast of the challenges the sector throws up. With news analysis, comment from industry experts, case studies and coverage of all the latest trends, the title is a one-stop shop for those wishing to retain a competitive edge in this fast-moving industry.