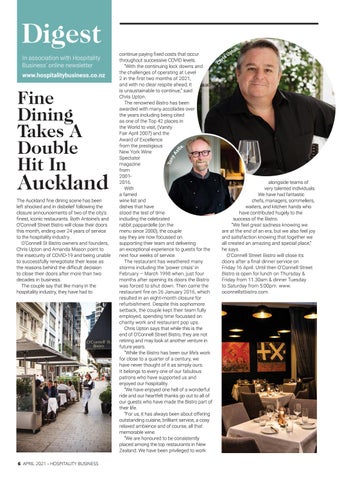 Auckland The Auckland fine dining scene has been left shocked and in disbelief following the closure announcements of two of the city’s finest, iconic restaurants. Both Antoine’s and O’Connell Street Bistro will close their doors this month, ending over 24 years of service to the hospitality industry . O’Connell St Bistro owners and founders, Chris Upton and Amanda Mason point to the insecurity of COVID-19 and being unable to successfully renegotiate their lease as the reasons behind the difficult decision to close their doors after more than two decades in business.   The couple say that like many in the hospitality industry, they have had to

continue paying fixed costs that occur throughout successive COVID levels. “With the continuing lock downs and the challenges of operating at Level 2 in the first two months of 2021, and with no clear respite ahead, it is unsustainable to continue,” said Chris Upton.    The renowned Bistro has been awarded with many accolades over the years including being cited as one of the Top 42 places in the World to visit, (Vanity Fair April 2007) and the Award of Excellence . from the prestigious tle New York Wine Spectator magazine from 20012016. With a famed wine list and dishes that have stood the test of time including the celebrated rabbit pappardelle (on the menu since 2000), the couple say they are now focussed on supporting their team and delivering an exceptional experience to guests for the next four weeks of service. The restaurant has weathered many storms including the ‘power crisis’ in February – March 1998 when, just four months after opening its doors the Bistro was forced to shut down. Then came the restaurant fire on 26 January 2016, which resulted in an eight-month closure for refurbishment. Despite this sophomore setback, the couple kept their team fully employed, spending time focussed on charity work and restaurant pop ups. Chris Upton says that while this is the end of O’Connell Street Bistro, they are not retiring and may look at another venture in future years. “While the Bistro has been our life’s work for close to a quarter of a century, we have never thought of it as simply ours. It belongs to every one of our fabulous patrons who have supported us and enjoyed our hospitality.   “We have enjoyed one hell of a wonderful ride and our heartfelt thanks go out to all of our guests who have made the Bistro part of their life. “For us, it has always been about offering outstanding cuisine, brilliant service, a cosy relaxed ambience and of course, all that memorable wine. “We are honoured to be consistently placed among the top restaurants in New Zealand. We have been privileged to work

alongside teams of very talented individuals. We have had fantastic chefs, managers, sommeliers, waiters, and kitchen hands who have contributed hugely to the success of the Bistro. “We feel great sadness knowing we are at the end of an era, but we also feel joy and satisfaction knowing that together we all created an amazing and special place,” he says. O’Connell Street Bistro will close its doors after a final dinner service on Friday 16 April. Until then O’Connell Street Bistro is open for lunch on Thursday & Friday from 11.30am & dinner Tuesday to Saturday from 5:00pm. www. oconnellstbistro.com.