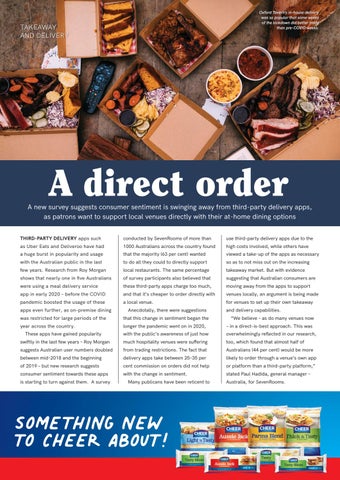 Oxford Tavern’s in-house delivery was so popular that some weeks of the lockdown did better trade than pre-COVID weeks.

A new survey suggests consumer sentiment is swinging away from third-party delivery apps, as patrons want to support local venues directly with their at-home dining options THIRD-PARTY DELIVERY apps such

conducted by SevenRooms of more than

use third-party delivery apps due to the

as Uber Eats and Deliveroo have had

1000 Australians across the country found

high costs involved, while others have

a huge burst in popularity and usage

that the majority (63 per cent) wanted

viewed a take-up of the apps as necessary

with the Australian public in the last

to do all they could to directly support

so as to not miss out on the increasing

takeaway market. But with evidence

shows that nearly one in five Australians

of survey participants also believed that

suggesting that Australian consumers are

were using a meal delivery service

these third-party apps charge too much,

moving away from the apps to support

and that it’s cheaper to order directly with

venues locally, an argument is being made

pandemic boosted the usage of these

for venues to set up their own takeaway

apps even further, as on-premise dining

Anecdotally, there were suggestions

was restricted for large periods of the

that this change in sentiment began the

year across the country.

– in a direct-is-best approach. This was

These apps have gained popularity

“We believe – as do many venues now

with the public’s awareness of just how

overwhelmingly reflected in our research,

much hospitality venues were suffering

too, which found that almost half of

from trading restrictions. The fact that

Australians (44 per cent) would be more

between mid-2018 and the beginning

delivery apps take between 25-35 per

likely to order through a venue’s own app

cent commission on orders did not help

or platform than a third-party platform,”

consumer sentiment towards these apps

with the change in sentiment.

is starting to turn against them. A survey

Many publicans have been reticent to

something new to cheer about!

Australian Hotelier is the monthly magazine for the nation’s pubs and supplier partners. For more than 30 years, it has delivered industry insights, product news, category analysis and advice for licensees.