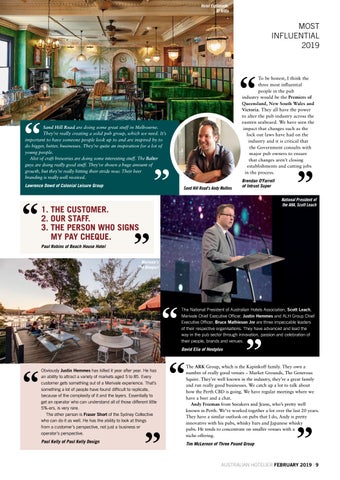 To be honest, I think the three most influential people in the pub industry would be the Premiers of Queensland, New South Wales and Victoria. They all have the power to alter the pub industry across the eastern seaboard. We have seen the impact that changes such as the lock out laws have had on the industry and it is critical that the Government consults with major pub owners to ensure that changes aren’t closing establishments and cutting jobs in the process.

Sand Hill Road are doing some great stuff in Melbourne. They’re really creating a solid pub group, which we need. It’s important to have someone people look up to and are inspired by to do bigger, better, businesses. They’re quite an inspiration for a lot of young people. Alot of craft breweries are doing some interesting stuff. The Balter guys are doing really good stuff. They’ve shown a huge amount of growth, but they’re really hitting their stride now. Their beer branding is really well received. Lawrence Dowd of Colonial Leisure Group

The National President of Australian Hotels Association, Scott Leach, Merivale Chief Executive Officer, Justin Hemmes and ALH Group Chief Executive Officer, Bruce Mathieson Jnr are three impeccable leaders of their respective organisations. They have advanced and lead the way in the pub sector through innovation, passion and celebration of their people, brands and venues.

Obviously Justin Hemmes has killed it year after year. He has an ability to attract a variety of markets aged 5 to 85. Every customer gets something out of a Merivale experience. That’s something a lot of people have found difficult to replicate, because of the complexity of it and the layers. Essentially to get an operator who can understand all of those different little 5%-ers, is very rare. The other person is Fraser Short of the Sydney Collective who can do it as well. He has the ability to look at things from a customer’s perspective, not just a business or operator’s perspective.

The ARK Group, which is the Kapinkoff family. They own a number of really good venues – Market Grounds, The Generous Squire. They’re well known in the industry, they’re a great family and run really good businesses. We catch up a lot to talk about how the Perth CBD is going. We have regular meetings where we have a beer and a chat. Andy Freeman from Sneakers and Jeans, who’s pretty well known in Perth. We’ve worked together a lot over the last 20 years. They have a similar outlook on pubs that I do, Andy is pretty innovative with his pubs, whisky bars and Japanese whisky pubs. He tends to concentrate on smaller venues with a niche offering. Tim McLernon of Three Pound Group