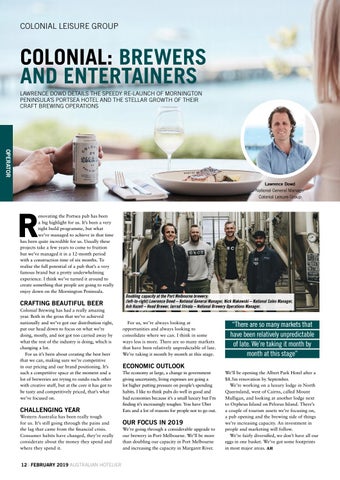 enovating the Portsea pub has been a big highlight for us. It’s been a very tight build programme, but what we’ve managed to achieve in that time has been quite incredible for us. Usually these projects take a few years to come to fruition but we’ve managed it in a 12-month period with a construction time of six months. To realise the full potential of a pub that’s a very famous brand but a pretty underwhelming experience. I think we’ve turned it around to create something that people are going to really enjoy down on the Mornington Peninsula.

CRAFTING BEAUTIFUL BEER Colonial Brewing has had a really amazing year. Both in the gross that we’ve achieved nationally and we’ve got our distribution right, put our head down to focus on what we’re doing, mostly, and not got too carried away by what the rest of the industry is doing, which is changing a lot. For us it’s been about creating the best beer that we can, making sure we’re competitive in our pricing and our brand positioning. It’s such a competitive space at the moment and a lot of breweries are trying to outdo each other with creative stuff, but at the core it has got to be tasty and competitively priced, that’s what we’ve focused on.

CHALLENGING YEAR Western Australia has been really tough for us. It’s still going through the pains and the lag that came from the financial crisis. Consumer habits have changed, they’re really considerate about the money they spend and where they spend it.

Doubling capacity at the Port Melbourne brewery; (left-to-right) Lawrence Dowd – National General Manager, Nick Makowski – National Sales Manager, Ash Hazell – Head Brewer, Jarrod Stivala – National Brewery Operations Manager. For us, we’re always looking at opportunities and always looking to consolidate where we can. I think in some ways less is more. There are so many markets that have been relatively unpredictable of late. We’re taking it month by month at this stage.

“There are so many markets that have been relatively unpredictable of late. We’re taking it month by month at this stage”

ECONOMIC OUTLOOK The economy at large, a change in government giving uncertainty, living expenses are going a lot higher putting pressure on people’s spending habits. I like to think pubs do well in good and bad economies because it’s a small luxury but I’m finding it’s increasingly tougher. You have Uber Eats and a lot of reasons for people not to go out.

We’ll be opening the Albert Park Hotel after a $8.5m renovation by September. We’re working on a luxury lodge in North Queensland, west of Cairns, called Mount Mulligan, and looking at another lodge next to Orpheus Island on Pelorus Island. There’s a couple of tourism assets we’re focusing on, a pub opening and the brewing side of things we’re increasing capacity. An investment in people and marketing will follow. We’re fairly diversified, we don’t have all our eggs in one basket. We’ve got some footprints in most major areas.