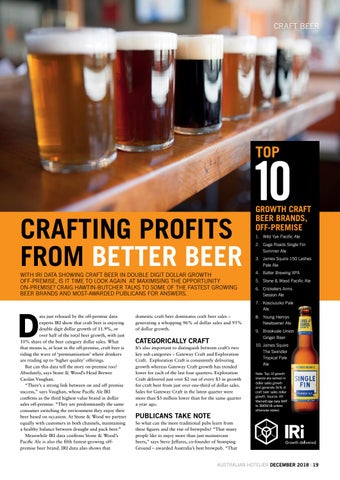 CRAFTING PROFITS FROM BETTER BEER WITH IRI DATA SHOWING CRAFT BEER IN DOUBLE DIGIT DOLLAR GROWTH OFF-PREMISE, IS IT TIME TO LOOK AGAIN AT MAXIMISING THE OPPORTUNITY ON-PREMISE? CRAIG HAWTIN-BUTCHER TALKS TO SOME OF THE FASTEST GROWING BEER BRANDS AND MOST-AWARDED PUBLICANS FOR ANSWERS.

ata just released by the off-premise data experts IRI show that craft beer is enjoying double digit dollar growth of 11.9%, or over half of the total beer growth, with just 10% share of the beer category dollar sales. What that means is, at least in the off-premise, craft beer is riding the wave of ‘premiumisation’ where drinkers are trading up to ‘higher quality’ offerings. But can this data tell the story on-premise too? Absolutely, says Stone & Wood’s Head Brewer Caolan Vaughan. “There’s a strong link between on and off premise success,” says Vaughan, whose Pacific Ale IRI confirms as the third highest value brand in dollar sales off-premise. “They are predominantly the same consumer switching the environment they enjoy their beer based on occasion. At Stone & Wood we partner equally with customers in both channels, maintaining a healthy balance between draught and pack beer.” Meanwhile IRI data confirms Stone & Wood’s Pacific Ale is also the fifth fastest-growing offpremise beer brand. IRI data also shows that

So what can the more traditional pubs learn from these figures and the rise of brewpubs? “That many people like to enjoy more than just mainstream beers,” says Steve Jeffares, co-founder of Stomping Ground – awarded Australia’s best brewpub. “That