Crowned on the Isle of Apples 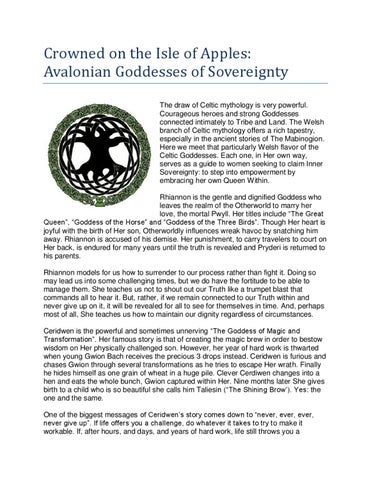 Crowned on the Isle of Apples: Avalonian Goddesses of Sovereignty The draw of Celtic mythology is very powerful. Courageous heroes and strong Goddesses connected intimately to Tribe and Land. The Welsh branch of Celtic mythology offers a rich tapestry, especially in the ancient stories of The Mabinogion. Here we meet that particularly Welsh flavor of the Celtic Goddesses. Each one, in Her own way, serves as a guide to women seeking to claim Inner Sovereignty: to step into empowerment by embracing her own Queen Within. Rhiannon is the gentle and dignified Goddess who leaves the realm of the Otherworld to marry her love, the mortal Pwyll. Her titles include “The Great Queen”, “Goddess of the Horse” and “Goddess of the Three Birds”. Though Her heart is joyful with the birth of Her son, Otherworldly influences wreak havoc by snatching him away. Rhiannon is accused of his demise. Her punishment, to carry travelers to court on Her back, is endured for many years until the truth is revealed and Pryderi is returned to his parents. Rhiannon models for us how to surrender to our process rather than fight it. Doing so may lead us into some challenging times, but we do have the fortitude to be able to manage them. She teaches us not to shout out our Truth like a trumpet blast that commands all to hear it. But, rather, if we remain connected to our Truth within and never give up on it, it will be revealed for all to see for themselves in time. And, perhaps most of all, She teaches us how to maintain our dignity regardless of circumstances. Ceridwen is the powerful and sometimes unnerving “The Goddess of Magic and Transformation”. Her famous story is that of creating the magic brew in order to bestow wisdom on Her physically challenged son. However, her year of hard work is thwarted when young Gwion Bach receives the precious 3 drops instead. Ceridwen is furious and chases Gwion through several transformations as he tries to escape Her wrath. Finally he hides himself as one grain of wheat in a huge pile. Clever Cerdiwen changes into a hen and eats the whole bunch, Gwion captured within Her. Nine months later She gives birth to a child who is so beautiful she calls him Taliesin (“The Shining Brow’). Yes: the one and the same. One of the biggest messages of Ceridwen’s story comes down to “never, ever, ever, never give up”. If life offers you a challenge, do whatever it takes to try to make it workable. If, after hours, and days, and years of hard work, life still throws you a

curveball, don’t take it lying down. Shift however you need to in order to meet that situation. Ceridwen has many faces and guides us through many mysteries. Though undoubtably Her face as Crone can be challenging at times, She does also wear the face of Compassionate and Loving Mother. Arianrhod is the determined and autonomous “Goddess of the Silver Wheel” and “Goddess of the Celestial Heavens”. Though connected to no man, mortal or otherwise, she births 2 sons at her uncle’s court in a rather embarrassing situation, made increasingly so by Her brother, Gwydion. One son, Dylan, slips off to live in the sea. The other is raised by Gwydion. When the boy is of age, he is brought to Arianrhod who, still seething, lays 3 geis on him. A geis being somewhere between a curse and a challenge: impossible to ignore but possible to work around. Arianrhod’s first geis involves the boy not having a name unless She bestows it. She is tricked into doing so and Lleu Llaw Gyffes receives his name. Her second is that Lleu will not bear arms unless She gives them. Again she is tricked by Her brother, Gwydion. The last is that young Lleu will never have a mortal wife. This leads to a whole other Goddess. Arianrhod’s story gives a clear message of how to negotiate the path to Sovereignty. Many clues are through Her own example. She is leader of the women in Her castle. In fact, She holds domain over two castles: Caer Arianrhod and Caer Sidi. She knows Her own worth, even when others try to tear it down. She is comfortable in her anger and does not give way when others try to cow Her with charges of “being wicked”. And yet, at the same time, She is appreciative of beauty. As Mistress of the Celestial Skies, She is in tune with patterns, Cycles and order. And most importantly, the true gift in Arianrhod’s story is the charge of the three geis. Through these She tells us what is most core in the Quest to come into our Sovereign Selves. Blodeuwedd is the lovely Goddess created out of flowers as a bride for Lleu by Gwydion and his uncle, Math. Indeed, Her very name means “Flower-Face”. Created to serve as Lleu’s beautiful but docile Queen, Blodeuwedd changes the playing field when She falls in love with the stranger, Gronw. Their love leads to the death of Lleu (as in, transformation to an eagle) which angers Gwydion. He restores Lleu to life (as in, back to human form) and punishes Blodeuwedd by turning Her into an Owl (“a bird detested by all other birds”),leaving Lleu to kill Gronw. There are so many levels to Blodeuwedd’s story. The magic and mystery of Her creation. Her journey from Spirit into the form of a woman. The silence of Her Queendom by Lleu’s side. The electrifying meeting between Herself and Gronw. Her punishing transformation. In many ways She stands as a symbol for the journey of women throughout history, and particularly in the mid-20th century. The story of Her journey from Lleu’s wife to a woman who finds Her own voice and chooses Her passion can be seen as a reflection of the collective journey of women from pre-50&#39;s stereotypical roles to post 60&#39;s Women’s Movement freedoms. She embodies the courage of the risk involved in looking a limiting situation in the eye and embarking on a course of action that will allow Her Spirit to thrive rather than just survive. Blodeuwedd shows us how to choose and honour that which enlivens our hearts and have the

courage to embrace it. In doing so, She becomes “The Owl Maiden” who can see even in the dark places and knows the wisdom that is contained there. Branwen’s story is perhaps the saddest of the tales. As “One of the Three Great Matriarchs of Britain”, she is betrothed to the King of Ireland who is insulted by her halfbrother. All attempts to resolve the growing conflict are complicated by this half-brother, resulting in war and utter devastation. Only seven survive and Branwen dies of a broken heart. Branwen stands as the unwavering centre of these Goddesses in the Avalonian Tradition. She does not try to coerce and challenge anyone to act or behave in a certain way as do the others, each in their own ways. She just IS and those around Her can rise up to the best in themselves or not. She embodies the message of Free Will and the choice of how we view situations and circumstances. She truly is the fixed centre around which all this action (and devastation) occurs. And yet, She is perhaps the most human of all the Goddesses. Her broken heart, symbolized in the cleaved rock of Bedd Branwen, is testament to Her love and compassion. Each of these Goddesses alone offers a powerful message in how to move through the challenges, both internal and external, involved in coming to the truth and strength of ourselves. Each, in Her own story, offers guidance on how to come into our own Sovereignty. However, the true power of their messages comes through when seen as aspects of a larger Whole. In the Avalonian Tradition, each of these Goddesses provides the guiding energy for one stage in the complete Avalonian Cycle of Healing. Recognizing that growth in not a short and straightforward path, the Cycle draws on the particular focus of each Goddess’ message to address the different challenges we meet along the way. In coming fully into our Truth and our Strength, in order to recognize and embrace the Queen Within, these five Goddesses walk with us, lending support and guidance at different times, regardless of the obstacles that may face us. They bring dignity and perseverance, wisdom and determination, passion and choice, comfort and encouragement. But most of all, they bring a reflection of the best we can seek to attain within ourselves. Together, they offer the Crown of the Blessed Isle and the Mantle of Sovereignty. It is up to us to accept.

Crowned on the Isle of Apples

An introduction to the 5 Goddesses of the Avalonian Tradition. Written by Tiffany Lazic, this article originally appeared in Building Bridges e-magazine in 2010 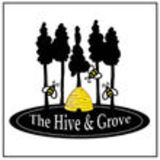 The Hive and Grove