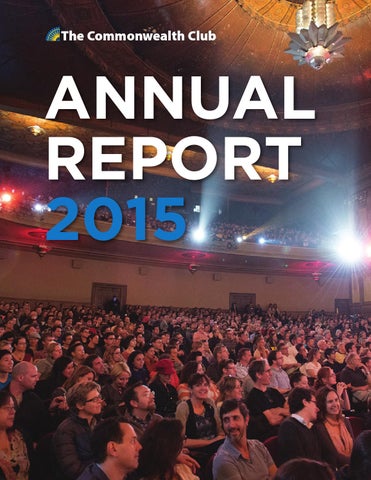 Our History The Commonwealth Club of California is the nationâ&amp;#x20AC;&amp;#x2122;s oldest and largest public affairs forum. We bring more than 400 annual events on topics ranging across politics, culture, society and the economy to more than 22,000 members.

Our Mission The mission of The Commonwealth Club of California is to be the leading national forum open to all for the impartial discussion of public issues important to the membership, community and nation.

Our Speakers Founded in 1903, The Commonwealth Club has played host to a diverse and distinctive array of speakers, from Teddy Roosevelt in 1911 to House Speaker Nancy Pelosi, California Governor Jerry Brown, political commentator David Brooks and author Christopher Hitchens in recent years. Martin Luther King, Jr., Ronald Reagan, Bill Clinton and Bill Gates have all given landmark speeches at The Commonwealth Club. A year in review: July 2014 to June 2015.

We’re the only industrialized country in the whole world that doesn’t have paid leave. Countries that don’t educate their girls—Afghanistan and Pakistan—have more paid leave than America. Kirsten Gillibrand U.S. Senator, October 8, 2014

Humility is not thinking lowly of yourself. Humility is radical self-awareness from a position of othercenteredness. David Brooks Op-Ed Columnist, The New York Times; author, The Road to Character, April 28, 2015

There’s always strength in numbers; don’t feel that you have to carry the weight of something by yourself. I would [advise people] to reach out to that one person, and then your community—your support system—will grow from there. [Use that] to try to navigate whatever turmoil you’re going through. Jason Collins Professional Basketball Player, August 11, 2014

We are not the only actor in this new and dangerous worldâ&amp;#x20AC;Ś.We shouldnâ&amp;#x20AC;&amp;#x2122;t resent that. We should understand that, and we should work with it. Jane Harman Former U.S. Representative, March 26, 2015

Writing changed my life. Writing gave me everything. I think you don’t write if you don’t have to. I think there’s that something in there. It’s the creative energy. Judy Blume Author, June 7, 2015

I believe that race is a completely constructed weirdness meant to suppress and deny. Charles Blow Visual Op-Ed Columnist, The New York Times; author, Fire Shut Up in My Bones, September 29, 2014

political issues, makes recommendations to government officials, and publishes the conclusions to benefit the public good. Rich discussed RAND’s recent conclusions and recommendations on such issues as coping with sea level rise resulting from climate change, implementing the Affordable Care Act, improving education outcomes for kids, reducing the spread of Ebola in Africa, and cutting through political polarization.

112th Annual Dinner The 2015 Distinguished Citizen Award Gala &amp; Dinner took place on April 2, 2015 at the Historic Ritz Carlton Hotel in San Francisco. With the theme of “Forever Innovative,” The Commonwealth Club of California recognized luminaries in the global economy who are giving back to their communities by paying tribute to: Levi Strauss &amp; Co – represented by Chip Bergh, President &amp; CEO. Jennifer Siebel Newsom, Founder and CEO of The Representation Project. John S. Watson, Chairman of the Board and CEO of Chevron Corporation. Sir Michael Moritz, William K. Bowes, Jr. Lifetime Achievement Award recipient, venture capitalist and Chairman of Sequoia Capital. The Gala was emceed by Dan Ashley, Anchor of ABC7 News, and the Gala Co-Chairs were Evelyn Dilsaver, former EVP of Charles

Schwab, and Jaleh Daie, Ph.D., Managing Partner of Aurora Equity. In addition to recognizing these outstanding honorees, the Gala is also the Club’s largest annual fundraiser, and this year’s event was a resounding success, raising over $1.1 million dollars both in advanced ticket &amp; tables sales and at the Fund-the-Forum Auction. The proceeds of the gala support the general operating budget of the Club, and allow the Club to continue to produce outstanding events, podcasts, YouTube clips, and radio programs that are broadcast and downloaded worldwide. Thank you to all who attended and joined in the success of this outstanding evening.

Annual Report for 2014-2015 of The Commonwealth Club of California. 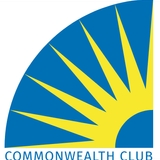 The Commonwealth Club of California