Journey to a Shared Humanity 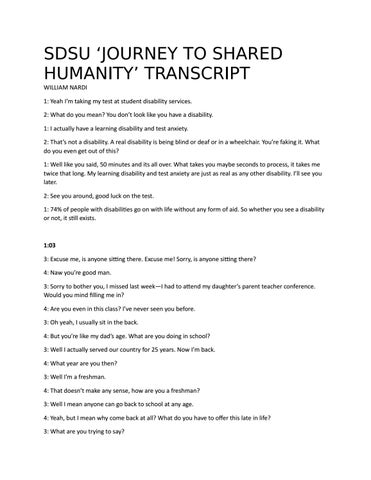 SDSU ‘JOURNEY TO SHARED HUMANITY’ TRANSCRIPT WILLIAM NARDI 1: Yeah I’m taking my test at student disability services. 2: What do you mean? You don’t look like you have a disability. 1: I actually have a learning disability and test anxiety. 2: That’s not a disability. A real disability is being blind or deaf or in a wheelchair. You’re faking it. What do you even get out of this? 1: Well like you said, 50 minutes and its all over. What takes you maybe seconds to process, it takes me twice that long. My learning disability and test anxiety are just as real as any other disability. I’ll see you later. 2: See you around, good luck on the test. 1: 74% of people with disabilities go on with life without any form of aid. So whether you see a disability or not, it still exists.

1:03 3: Excuse me, is anyone sitting there. Excuse me! Sorry, is anyone sitting there? 4: Naw you’re good man. 3: Sorry to bother you, I missed last week—I had to attend my daughter’s parent teacher conference. Would you mind filling me in? 4: Are you even in this class? I’ve never seen you before. 3: Oh yeah, I usually sit in the back. 4: But you’re like my dad’s age. What are you doing in school? 3: Well I actually served our country for 25 years. Now I’m back. 4: What year are you then? 3: Well I’m a freshman. 4: That doesn’t make any sense, how are you a freshman? 3: Well I mean anyone can go back to school at any age. 4: Yeah, but I mean why come back at all? What do you have to offer this late in life? 3: What are you trying to say?

4: I mean you had your chance when you were young, and now young people like my friend Cameron who’s smart and awesome didn’t get in because of old people like you coming back. 3: Hey, I earned this spot, alright? I have as much right to be here as anyone else. 4: That’s ridiculous, I’m out. Professor: Alright class let’s get started.

2:45 F1: Hey have you seen my friend? She was in a blue crop top and shorts. She was right behind me as I was walking in. M5: Oh you mean the whale in the crop top? You actually thought she was gonna get in? F1: Are you serious? M5: Yeah! Who didn’t see her? I saw her coming from a mile away. F1: What makes you think you can say this? Are you really that shallow? M5: Look, we can’t have fat people in our party, we have a reputation to maintain, you should be happy we let you in. F1: I can’t believe you just said that. M5: Look, I go to the gym, I watch what I eat, its not that hard. I’m sorry your friend can’t control herself, its her fault that she’s like that. F1: You are such an ass. Who would even want to associate with you anyways? Enjoy your party. Too fat, too tall, too skinny, too short? If this is how you see me, how am I supposed to view myself?

3:40 Inaudiable… F2: Then trampled on by an enormous elephant, a new vice-royce seated on its back. I hate Indians. They are beastly people with a beastly religion. M6: The careful student of issue will discover that Christianity has been of very little value in advancing civilization but has done a great deal to retarding it. F3: Atheism is the result of ignorance and pride of strong sense and feeble reasons, of good eating and ill living. It is the plague of society the corrupter of manners and the underminer of property. M7: Only when this Jewish –inaudiable—infecting the people has been removed can anyone hope to establish a cooperation amongst the nations which shall be built up on a lasting understanding.

F4: It is after all far too easy to pinch and kick the bizarre Mormon church. To say its right for satire and parody is to say a Catholic schoolgirl is right for debauchery. It’s like shooting a polygamist fish in a barrel of coffee. M8: I have studied the Quran a great deal. I came away from the study with a conviction that by and large there have been few religions in the world as deadly to men as that of Mohammed. As far as I can see, it is the principled cause of the decadence. I therefore regard it as a form of decadence rather than a form of progress and relation to paganism itself.

5:20 M9: I’ve got to tell you what happened the other day, it was crazy. F5: What happened? M9: You know that girl Elizabeth? She just snapped at me. F5: Why? M9: Well she was talking about her significant other and all I asked was what’s he like and she just went off, said I was close-minded. F5: Didn’t she just come out? M9: I mean apparently, but I didn’t hear about it. I didn’t mean to be rude. F5: I don’t blame you, if I were in your shoes I’d feel the same way. M9: Right, I feel like there’s all this PSB-er-PC-BS. It’s like they’re trying to be so inclusive they forget to include the rest of us. F5: Um yeah, but, M9: And when you look at the total population gays don’t even count as that big a percentage. Aren’t they just blowing this out of proportion? F5: Well people who identify as heterosexual do make up the majority, but isn’t that more of a reason to stand up for those people who are under inaudiable M9: I mean I guess but I don’t know if this is the same thing. F5: And even if it takes a little more effort, don’t you think it’s a good idea to give recognition to a community that has been historically mistreated? I don’t know, maybe that’s just my opinion and maybe some thoughts that are going through your head when you said that comment. M9: I guess I never really thought about it like that. F5: Well, maybe you should start.

F6: Hey have you seen the homework last night? M10: I know it was really hard because I live in a triple and my roommates were being really loud so I can’t really concentrate. F6: Oh, that sucks, I mean we can go over to my room I have a single. M10: Wow it must be nice, probably cost a lot too, huh? F6: Not really, I mean, I will be saving a lot of money next year by living off campus. M10: I’m probably going to be able to live on campus next year. I’ve been looking into it and I can’t really afford it right now. F6: But don’t you get financial aid? Isn’t that what its for? M10: Um, not exactly, there’s rules to how much funding it can give me. F6: Oh, maybe if you just budget your money a bit better, then you can live off campus. M10: Um, okay then. F6: Uh, going back to the homework, you should really try A+ review, its only $80, isn’t that so cheap? Its so helpful. M10: Yeah it sounds helpful, but I can’t afford it right now. F6: Um how about the free tutoring in the library? Its from 8am to 5pm. M10: Yeah I’ve heard about it but I work during those hours. F6: Okay, do you just want to go to Panera’s and talk about this some more then? M10: I can’t afford Paneras. F6: I can treat you, you always help me anyways. M10: Naw its okay, I’m supposed to be using a meal swipe anyways. F6: Honestly you’re making this more difficult than it needs to be. M10: In 2017 54% of SDSU students live below the poverty line. 34% are financially insecure. You never know the financial circumstances of those around you.

F8: My first year of college I was at a party where when a white guy walked up to me. He was wanting to kiss me because he felt people of my race were exotic. Inaudible—of a race is a form of racism because it degrades a race to a sexual ?opera? F9: My entire life people have told me that I’m white and I’m not black enough. If I get loud they say you just sounded so black. This is oppressive language because they expect me to abide by negative racial stereotypes they have and imply that I’m almost worthy of being white. M12: Just because I’m black doesn’t mean I belong on a sports teams, I’m more than someone’s entertainment, I’m more than a jester. I work really hard here, I deserve to be here. I’m intellectual, trustworthy, and respectful. I am unique. F10: Being impressionable at a young age, of all views, people confused me of other races and I’m glad they make fun of me for it. It made me stick out like a sore thumb and I felt like an outsider. If I wasn’t anyone of these races, why was I acting like I was? Why were they making fun of me, or any race in general? F7: Wow that was incredibly shocking. I never knew that racism affected so many people. Racism is a real issue and it needs to be addressed. M11: No matter what race or ethnicity, everyone goes through different barriers. It is important that we are able to define ourselves. After watching this video are you gonna advocate against racism?

9:43 F11: Mom are you watching the news? F12: Yeah, they’ve been knocking on my door ever since the news was released. F11: What are we gonna do? My teacher pulled me out of class today and told me to go home and told me to call all my loved ones. What does that mean? F12: Just stay home for now miha, someone will come and get you. I don’t want you to be scared, but I just need you to understand. F11: Understand what mom? F12: You may not be able to go back to school for a while. M12: (Knocking on door) IS OPEN UP! F11: Mom who was that? F12: I have to go. Don’t let them teach you to be scared of others that don’t look or sound like you. Okay, stay quiet and stay put. F11: Wait, mom? F12: Ti amo mucho.

F11: Wait, don’t go! Don’t touch her! Mom! How would you feel if one of your family members was getting taken from you? Well its happening today. It’s happening to me.

11:43 F13: Those who cannot learn from history are doomed to repeat it.

12:04 M13: (knocking) Come in its open! F14: Hi! How are you doing? M13: I’m good. F14: I have some issues with my roommate. M13: What’s going on? F14: She’s a little to foreign for me. Like she speaks a different language. She wears this like headscarf, I don’t think I’ve ever seen her hair so I don’t know if she washes it and every time I try to ask her where she’s from she says she’s from Ohio, but she’s like clearly from the Middle East and to be completely honest with you I don’t feel comfortable sharing a room with someone who could be related to a terrorist. M13: Well, thanks for telling me, but if I can ask, where’d you get that information from? F14: Like the news and social media. M13: So I want to challenge you to finding your own research on your own. Don’t just get it from one media source and maybe even talking to your roommate and get to know him a little more and draw conclusions with that. F14: I don’t think I’d feel comfortable with that, but thanks for listening. M13: Yeah, no problem.

13:13 F15: Cisgenderism is the discrimination of people whose assigned sex does not align with their gender identity.

Journey to a Shared Humanity