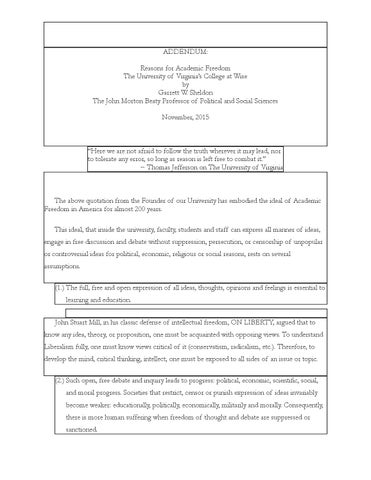 “Here we are not afraid to follow the truth wherever it may lead, nor to tolerate any error, so long as reason is left free to combat it.” ~ Thomas Jefferson on The University of Virginia

The above quotation from the Founder of our University has embodied the ideal of Academic Freedom in America for almost 200 years. This ideal, that inside the university, faculty, students and staff can express all manner of ideas, engage in free discussion and debate without suppression, persecution, or censorship of unpopular or controversial ideas for political, economic, religious or social reasons, rests on several assumptions. (1.) The full, free and open expression of all ideas, thoughts, opinions and feelings is essential to learning and education. John Stuart Mill, in his classic defense of intellectual freedom, ON LIBERTY, argued that to know any idea, theory, or proposition, one must be acquainted with opposing views. To understand Liberalism fully, one must know views critical of it (conservatism, radicalism, etc.). Therefore, to develop the mind, critical thinking, intellect, one must be exposed to all sides of an issue or topic. (2.) Such open, free debate and inquiry leads to progress: political, economic, scientific, social, and moral progress. Societies that restrict, censor or punish expression of ideas invariably become weaker: educationally, politically, economically, militarily and morally. Consequently, there is more human suffering when freedom of thought and debate are suppressed or sanctioned.

(3.) The proper way to counteract bad, evil or hurtful ideas is not to censor them, but to refute them with good ideas. This rests on the belief that truth is stronger than error and will eventually win in “the free marketplace or ideas.” This view also holds that no imperfect person, organization or agency is capable of deciding, finally, what is right or wrong; but that knowledge is progressive, always being distilled and advanced by discussion, debate discourse and dissent. (4.) That a society that learns to engage in conflict in the realm of ideas (debate, discussion) is less likely to engage in physical conflict (violence) and so an intellectually free society will also be a more orderly, peaceful society. (5.) Intellectual freedom is essential to democracy. When personal and political opinions are suppressed, even for the best of reasons (oppressive, offensive views, etc.) the government becomes a dictatorship, which causes more oppression, poverty, loss of opportunity and misery. This is why the U.S. Supreme Court, in its upholding of the First Amendment Constitutional guarantee of Freedom of Speech, has warned against the “chilling effect” of any restrictions on expression, as the fear of punishment leads to a kind of “selfcensorship,” damaging social relations and individual happiness.

As obnoxious as some views clearly are (e.g., racism sexism, insults, national chauvinism), if these ideas are not allowed to be expressed, they will reappear in new and pernicious forms, leading to their prevalence in new and dangerous ways. As the philosopher Santayana wrote: “Those who cannot remember the errors of the past are condemned to repeat them” As messy as freedom of speech seems at times, it actually leads to a freer, more secure, orderly and happy society and individual. The countries that do not have Academic Freedom have universities that do not have education as much as propaganda and indoctrination. (6.) The university is one institution in society where this full intellectual freedom can exist. Business, the military, religious organizations, and even political parties and agencies often cannot tolerate this full, free exchange of ideas. And yet, all of those institutions are enhanced by personnel who have benefited from the university training of free and tolerant debate, and the rational, intelligent minds it produces. As the Princeton University faculty stated in its recent resolution on Academic Freedom:

Because the University is committed to free and open inquiry in all matters, it guarantees all members of the University community the broadest possible latitude to speak, write, listen, challenge, and learn…. Of course, the ideas of different members of the University community will often and quite naturally conflict. But it is not the proper role of the University to attempt to shield individuals from ideas and opinions they find unwelcome, disagreeable, or even deeply offensive…. In a word, the University’s fundamental commitment is to the principle that debate or deliberation may not be suppressed because the ideas put forth are thought by some or even by most members of the University community to be offensive, unwise, immoral, or wrong-headed. It is for the individual members of the University community, not for the University as an institution, to make those judgments for themselves, and to act on those judgments not by seeking to suppress speech, but by openly and vigorously contesting the ideas that they oppose…. This ideal of intellectual freedom has existed in our world since Plato’s Academy in ancient Athens, in the Roman universities, the Medieval European universities, up to our English and American colleges and universities. Sadly, this ideal has always been under attack, from political authoritarianism, religious bigotry, and social and economic pressure. From the execution of Socrates in Ancient Greece for the crime of asking questions, to the imprisonment, execution, fines, and dismissal from academic positions of persons for expression of ideas, the ideal of Academic Freedom has been threatened. Today, such full and free expression of ideas in the academy is threatened by political policies and economic pressures; often for the best of motives: ending harassment, ensuring budgets. But the preservation of Academic Freedom, we believe will ultimately lead to the greatest social opportunity, individual strength and institutional prosperity. If the university loses the Jeffersonian ideal of academic freedom, all of society will suffer: politically, economically, scientifically, technologically and personally. Therefore, Academic Freedom should be promoted, protected and cherished by all levels of the university and college community. More from The College Fix