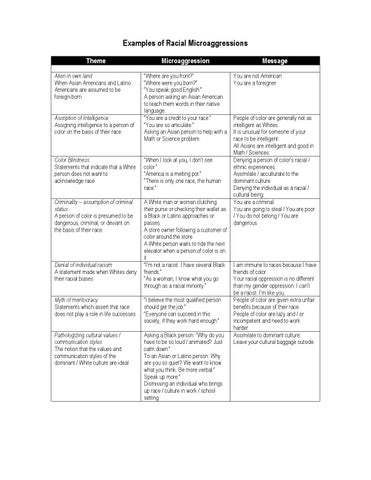 Examples of Racial Microaggressions Theme Alien in own land When Asian Americans and Latino Americans are assumed to be foreign-born Ascription of Intelligence Assigning intelligence to a person of color on the basis of their race.

Microaggression “Where are you from?” “Where were you born?” “You speak good English.” A person asking an Asian American to teach them words in their native language. “You are a credit to your race.” “You are so articulate.” Asking an Asian person to help with a Math or Science problem.

“When I look at you, I don’t see color.” “America is a melting pot.” “There is only one race, the human race.”

Criminality – assumption of criminal status A person of color is presumed to be dangerous, criminal, or deviant on the basis of their race.

A White man or woman clutching their purse or checking their wallet as a Black or Latino approaches or passes. A store owner following a customer of color around the store. A White person waits to ride the next elevator when a person of color is on it. “I’m not a racist. I have several Black friends.” “As a woman, I know what you go through as a racial minority.”

“I believe the most qualified person should get the job.” “Everyone can succeed in this society, if they work hard enough.”

Asking a Black person: “Why do you have to be so loud / animated? Just calm down.” To an Asian or Latino person: Why are you so quiet? We want to know what you think. Be more verbal.” Speak up more.” Dismissing an individual who brings up race / culture in work / school setting.

Message You are not American You are a foreigner

People of color are generally not as intelligent as Whites. It is unusual for someone of your race to be intelligent. All Asians are intelligent and good in Math / Sciences. Denying a person of color’s racial / ethnic experiences. Assimilate / acculturate to the dominant culture. Denying the individual as a racial / cultural being. You are a criminal. You are going to steal / You are poor / You do not belong / You are dangerous.

I am immune to races because I have friends of color. Your racial oppression is no different than my gender oppression. I can’t be a racist. I’m like you. People of color are given extra unfair benefits because of their race. People of color are lazy and / or incompetent and need to work harder. Assimilate to dominant culture. Leave your cultural baggage outside.

A college or university with buildings that are all names after White heterosexual upper class males Television shows and movies that feature predominantly White people, without representation of people of color Overcrowding of public schools in communities of color Overabundance of liquor stores in communities of color “Indian giver.” “That’s so gay.” “She welshed on the bet.” “I jewed him down.” “That’s so White of you.” “You people …” “We got gypped.” Imitating accents or dialects Others?

How to offend without really trying

University of Wisconsin-Stevens Point officials have advised its faculty that the term "America is a melting pot" - among other common phrases - are racial microaggressions.