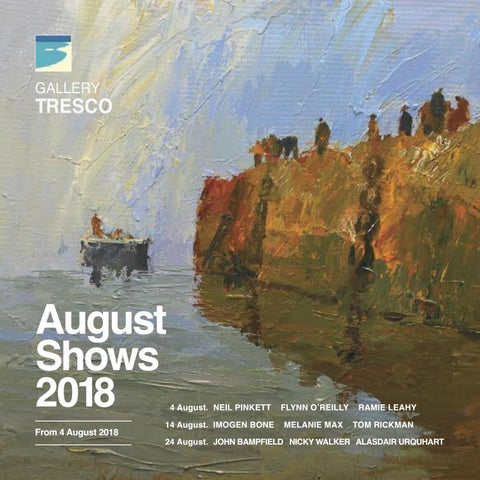 It is with great pleasure and pride that I introduce this wonderful,

vibrant collection of paintings for the

August shows. Each artist has lovingly given of themselves, expressing their passion for the common subject.

The joy of a visit to Scilly is captured

on canvas and board, crystallised for

posterity as testament to the magic that these special islands evoke.

On my recent visits to Scilly I've been drawn to the day-to-day tasks and activities of myself and others. As soon as you arrive those little tasks draw you in to Scilly's safe environs like an arm around the shoulders.â&#x20AC;?

4 Picking the way across

I have visited Scilly since childhood and it has always had a special place in my heart, so with this body of work I wanted to capture the magic of the islands. The changing light, vast open skies and vivid colours that dominate Scilly were my main focus, alongside the shimmering white sands and azure waters that populate many happy memories.â&#x20AC;?

This series of paintings was executed during the early summer of 2017 when island life was busy saving fodder for the livestock. It was a turbulent climatic time with squalls and storms adding to the brooding colours in the landscape. I was staying at Rose Cottage, in the heart of the grazing land, where I enjoyed capturing a series of studies of rural Tresco with the cows sheltering in windswept conditions. All these paintings were created en plein air on the island, except for St Michael’s Mount painted prior to catching the ferry from Penzance.”

The sea and sky are an integral part of the landscape here in Scilly. I do not see the islands purely as land mass, the vast surrounding space is as much Scilly as the tiny Islands that punctuate the view.â&#x20AC;?

34 So much space on such small islands

35 The tide creeps in quietly

Solitary walks at dawn and dusk are my favourite way to be in the landscape. Visiting Tresco gives me plenty of chance to have these special moments. To be calmed and to be soothed by the soft light and the silence. I hope this collection of paintings reflects the peacefulness I find there and hope they bring a feeling of calm to others too.â&#x20AC;?

Every time I go to Tresco, though now feeling quite familiar with the place, something crops out of its nooks and crannies that draws me in. Usually my gaze turns west, but this time, at moments, I looked at what the light was doing to the land and sky over my shoulder. And usually, after rain the air is clear, the clouds are lit like a magic lantern show. I was lucky with the breaks in the weather, small pockets of jewels set up in the sky. The larger light from the ocean shining within the intimate space of these islands.â&#x20AC;?

When I visit Tresco out of season, with my wife Wendy, apart from a few sandpipers, gulls, oystercatchers and other sea birds, as well as the odd seal, the beaches are empty. And I have to admit, this is how I like it. It’s such a privilege to have the place to ourselves. But as a working artist who exhibits at Gallery Tresco I also have to consider what I might want to paint for the next show. When I get home I’m none the wiser. Sketches come out, photos, brochures anything to remind me of how it feels to be on Tresco. Then I disregard all this and just paint from my heart. I’m not saying this is the right way to do it. Just that it’s my way.”

61 Round Island light with agapanthus

65 Calm before the storm

I followed the Beast from the East to Tresco this year, expecting the worst of weather or even snow, but after the mist, came sunshine and the odd April shower – all of which only helped to enhance the atmosphere of this magical island. I found myself producing a mixed bag of work from turquoise seas to misty, moisty mornings, watching the Blockhouse appear and disappear in that mystical yellow light that sometimes pervades the island. The skies and colours were ever changing, clouds scudding across St Martin’s, the odd shower and rainbow over Round Island, soft peachy tones towards Samson and glowing pink sunsets, that reflected from Hell Bay right across to Old Grimsby, till you felt you were being wrapped in pink blancmange. Amazing!”

Whatever the season, Tresco intrigues and delights in equal measure for it is a place of peace, myth and timeless beauty. Its capacity to show nature’s myriad moods in quick succession, is a challenge from which on each artist’s residency I never tire of … distilling then something of this unique essence brings me back, fresh and wondering, year after year …”

How to buy our art

All of the art shown is available on

publication of this brochure. If you

These shows can also be viewed

Colours may vary between the originals and these reproductions. All measurements shown are in centimetres and are image size only excluding the frame. 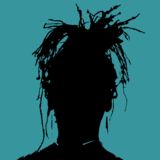