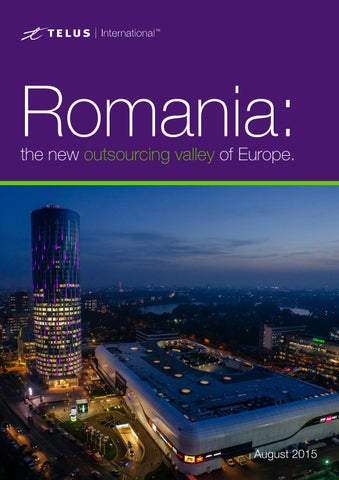 Romania’s reputation as an attractive outsourcing destination is on the rise. The country has been climbing in various rankings of prominent associations, agencies and organizations as a top outsourcing destination not only in Europe, but also globally. Why is that? Romania holds its position as a home to more offshore and near-shore centers than any other Southeastern European country thanks to its cost-quality balance, flourishing technology hub, and abundance of professional, multilingual talent. We have dedicated this booklet to taking a deeper look at what makes Romania such a great Business Process Outsourcing (BPO) destination, exploring characteristics that contribute to its popularity and success. And if the impressive statistics and studies that follow are not enough to convince you to outsource in Romania, we invite you to visit our Bucharest office yourself!

Look East, Eastern Europe that is, for a top outsourcing destination!

With the growth of the outsourcing industry, more companies are now looking to Eastern Europe as a preferred outsourcing destination.

While Asia and Latin American remain strong ■ The 2014 A.T. Kearney Index ranked Romania outsourcing options, Eastern Europe offers the 5th among the most attractive outsourcing ideal combination of affordability and skilled talent. destinations in Europe Thanks to Romania’s abundance of a professional, ■ A 2014 study by KPMG ranked Romania as multilingual and highly-skilled labor pool, as well the fastest growing market in the European as its cultural proximity to Western Europe, the Union in terms of IT outsourcing services country has been climbing in the outsourcing rankings for both European and North American ■ According to the Times Outsourcing Business companies: supplement 2012, Romania occupies 6th position globally in the top 10 emerging ■ Romania is ranked at number 4 as outsourcing destinations preferred outsourcing destination in the 2015 BPO and Shared Service Location Index by

Investors have named Romania “outsourcing valley” for BPO, ITO, software development, research programs, knowledge process outsourcing operations, as well as for shared service centers. But why? A few quick reasons: ■ Geographical (1-2 hour flights) and cultural (business ethics) proximity to Western Europe facilitating close relationship between client and vendor compared to offshore locations ■ Strong aptitude for multilingual skills ■ Knowledgeable and experienced IT workforce ■ Academic readiness to back high demand in talent pool continuity ■ The right price-quality ratio ■ Political and economic stability ■ EU member state, which simplifies legal and financial issues As a flourishing technology hub, the country is becoming a leader in ITO. As per data from ANIS, Association of the Software and Services Industry in Romania, the country currently has around 50 offshore centers owned by large international IT vendors.

More than half of these are BPO centers, 30% are IT services-related centers, and less than 20% are R&amp;D facilities. The labor force employed in the outsourcing sector has been increasing over the years, from 15,000 employees in 2007 to over 50,000 employees currently working in the outsourcing industry, as per data from the Romanian Ministry of IT and Communications. Romania offers cultural proximity to Western Europe, which smooths communication and allows for the execution of more complex projects in a time zone that is relatively close to the customers being served. The country is well positioned to compete internationally. 95.4% of all students study English and are fluent or proficient by the time they have finished their schooling. Also, Romania has the largest labor pool in Southeastern Europe (SEE), with over 9 million workers - and that number is growing. The country has more than 300,000 graduates per year, 4,000 of which are specialized in IT. The country’s capital, Bucharest, is the most preferred BPO location with several established companies and brands calling it home. With strong infrastructure and fast development, the country also boasts some of the fastest Internet speeds in the world, especially in the capital.

Even though Romania may not be the lowest priced when it comes to outsourcing services, the proficiency of the labor force in terms of multilingual, technical and soft skills actually make the cost very competitive compared to the quality of the outsourcing services in India, for example. According to The National Institute of Statistics in Romania (INSEE), the average gross wage in a contact center is around 600 to 700 EUR per month. Alina Plaia, VP at Luxoft, comments in an interview for ZDNet, a news portal for IT professionals, that the cost of outsourcing to Romania compared India is justified due to

Romania compared India is justified due to the seniority of Romanian staff and the level of execution. She adds: “The new age of outsourcing is more about innovation and outsourcing certain capabilities rather than merely doing things cheaply. More and more tasks are being outsourced because they cannot be done in house, not only for the economic reasons. Therefore, the cost-related question is often irrelevant.”

Palace of the Parliament, Bucharest.

The country’s sizable and multilingual labor force and student body are among the main lures for international companies to outsource in Romania. The diverse linguistic profile makes it especially attractive for BPO operations that require interaction with customers, while the large pool of IT professionals ensures best-in-class ITO operations. Romanians are known internationally for their strong aptitude for speaking European languages, primarily English, followed by French, Italian, Spanish and German.

According to the study “Software &amp; IT Services in Romania – A Study on the Development of the Industry of Software and IT Services in Romania in 2013”, commissioned by ANIS in Romania and developed by IDC (International Data Corporation), 95.4% (more than 1.74 million) of the students were studying English in 2011. German was studied by 8.6% of the students (156,236), while French was studied by over 1.55 million (85.0%) students in 2011, which is more than any other country in CEE (Central Eastern Europe).

The same study also reports Romania to have In the past 10 years, around 20 multilingual major the largest pool of human capital in Southeastern call centers and BPO organizations have come Europe, with a total labor force of more than 9 to operate in Romania, finding a large multilingual million in 2011. In 2012, the Romanian IT sector labor pool able to serve millions of customers employed more than 60,000 professionals. The across Europe and the USA. majority of them (more than 80%) are technical specialists, such as software engineers, analysts, The country’s size guarantees a robust pipeline developers, and project managers. of talent from its network of universities. Transylvania is home to a large German-speaking When it comes to ITO, Romania is 1st in population. French and Italian speakers are also Europe and 6th in the world, in terms of relatively easy to find thanks to Romania’s number of certified IT specialists. There’s linguistic and cultural affinity to Latin countries. a pool of about 100,000 people in various According to the Romanian Ministry of Education, IT-oriented profiles, with 42,000 considered more than 300,000 graduates entering the labor highly qualified IT specialists. The successful market every year speak a foreign language and presence of global high tech companies have an IT education. Nearly 60,000 engineers including Microsoft, IBM, P&amp;G, HP, Oracle, will graduate in 2015 and more than half are Wipro, S&amp;T, Accenture, WNS, Intel, as well based in Bucharest. Most of these graduates as Luxoft, Ubisoft and Amazon confirm are bilingual or trilingual and have completed Romania’s ITO experience and potential. part or all of their courses in a foreign language, English or French, in most cases. Herastrau Area, Bucarest.

Thanks to a balance between cost and quality, a flourishing technology hub, and the availability of professional, multilingual labor, Romania holds its position as a home to more offshore and near shore centers than any other SEE country.

Over the past decade some of the worldâ&amp;#x20AC;&amp;#x2122;s leading outsourcing players have started operations in Romania. In 2015, a dozen of them employed more than 50,000 people (source: ABSL). Among the major players are leading multinationals such as Hewlett Packard, Oracle, Genpact, Microsoft, Wipro, WNS and TELUS. Aviatorilor Area, Bucarest.

The French-speaking population is set to grow as Romania has more than 10,000 French teachers and the highest number of French learners in a non-French-speaking country. With 20% of the population speaking French at a high level, companies are turning their gaze to Romania for its outsourcing potential.

When it comes to the business environment (measuring political and economic stability), Romania is also well positioned. In November 2014, Klaus Johannis (national-liberal center-right party) won the Presidential elections in Romania.

This election was viewed as a new source of stability for the country bringing in a new In a study by the Embassy of France in Romania, government committed to foreign investment, over 1.7 million students learned French as a especially in the field of outsourcing. first language and between 35,000 and 50,000 Romanian students take courses abroad, As a member of the European Union since particularly in France. January 2007, Romania also enjoys strong economic growth: 3.5% in 2013, 2.2% in The number of French-speakers in Romania 2014 and an estimated 2.5% in 2015, also attracts more and more French principals, according to Coface, a provider of integrated with around 50,000 employees working in the credit risk management services in Romania. field of outsourcing (a percentage fluctuating between 15 and 20% per year since 2010). University Square, Bucharest.

Our exponential growth in Romania in 2014. TELUS International Europe saw great success in 2014. Our Romanian operations achieved remarkable employee growth, increasing by 69% in one year. This is in contrast to other companies that have had to downsize their labor force. Further, TELUS International Europe also grew revenues by 100% benefiting investments in both our client programs and our team members.

in the AFI Park, Bucharest’s newest and most advanced Class A Business Park. With five floors (5,300 sqm2) dedicated to TELUS International operations, the building is fully integrated into “AFI Palace Cotroceni”, the largest and most popular shopping mall in Romania and among the biggest shopping malls in the Central Eastern European region.

With this new office space, TELUS International To absorb this exponential growth, it was is positioned to grow and expand on behalf of time to look for a new site in Bucharest. Cool, clients in the years to come. friendly, convenient, innovative, all in one – the new TELUS International Europe office is located

Matching corporate culture with the work environment. “At TELUS International, our caring culture and commitment to putting customers first helps us enable customer experience innovation. Our AFI Park office not only fits our unique culture, it also helps us maintain high team member engagement, differentiating us in the Romanian market as an employer with the best work environment. And for our clients, it positions us as a BPO provider with a world-class delivery hub” said Yann Bidan, Country Manager for Romania at TELUS International Europe. Take a look at our new offices in AFI Park – and visit us in person soon!

Romania’s reputation as an attractive outsourcing destination is on the rise. Why is that? Romania holds its position as a home to more offshore and near-shore centers than any other Southeastern European country thanks to its cost-quality balance, flourishing technology hub, and abundance of professional, multilingual talent. And if the impressive statistics and studies that follow are not enough to convince you to outsource in Romania, we invite you to visit our Bucharest office yourself! 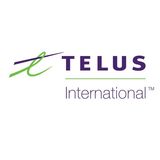