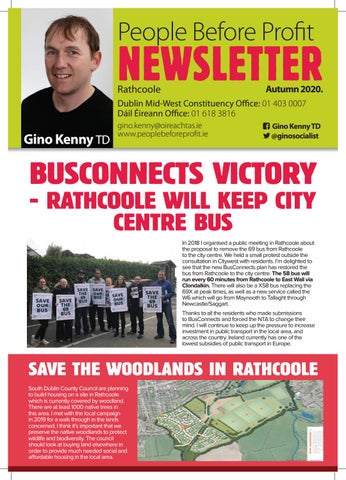 In 2018 I organised a public meeting in Rathcoole about the proposal to remove the 69 bus from Rathcoole to the city centre. We held a small protest outside the consultation in Citywest with residents. I’m delighted to see that the new BusConnects plan has restored the bus from Rathcoole to the city centre. The 58 bus will run every 60 minutes from Rathcoole to East Wall via Clondalkin. There will also be a X58 bus replacing the 69X at peak times, as well as a new service called the W6 which will go from Maynooth to Tallaght through Newcastle/Saggart. Thanks to all the residents who made submissions to BusConnects and forced the NTA to change their mind. I will continue to keep up the pressure to increase investment in public transport in the local area, and across the country. Ireland currently has one of the lowest subsidies of public transport in Europe.

SAVE THE WOODLANDS IN RATHCOOLE South Dublin County Council are planning to build housing on a site in Rathcoole which is currently covered by woodland. There are at least 1000 native trees in this area. I met with the local campaign in 2019 for a walk through in the lands concerned. I think it’s important that we preserve the native woodlands to protect wildlife and biodiversity. The council should look at buying land elsewhere in order to provide much needed social and affordable housing in the local area.

ASTI have balloted for strike over the unsafe working conditions in schools. Since schools have opened, there are claims of over 100 schools that have had Covid-19 cases. These have been underreported in the media, with teachers and parents left to keep track of where cases arise on social media. Teachers are also not being defined as “close contacts” even when cases occur in schools. They are rightly worried about the lack of PPE, test availability and test turnaround times, provisions for high risk teachers and resources to facilitate remote teaching and learning. For many vulnerable teachers, the necessary safety measures could be a matter of life or death. It is not just ASTI teachers that have cause for concern. 428 primary schools have lost a teacher in the new term, further adding to overcrowding in classrooms. Teacher pupil ratios in Ireland were already some of the highest in Europe before this pandemic due to underfunding of our education system. The government is determined to keep schools open at all costs because they need parents back in work to serve business interests. They are also playing the right to an education against the right of workers to be safe. Moreover, they are risking further spread of Covid-19 into the wider community, putting more people in danger. as schools could become a vector for spreading Covid-19 again in the community. People Before Profit will be in full support of the ASTI teachers if they choose to go on strike. Our teachers’ work environment is our children’s learning environment and we should refuse to be forced into choosing between education and safety.

The COVID-19 pandemic exposed the dysfunctional nature of the nursing home system. Nursing home residents represent 56% of all COVID-19 deaths in Ireland. The nursing care sector rather than being recognised as a critical area for potential outbreaks was deprioritized in the initial response to COVID-19. Staff shortages, lack of PPE and access to testing quickly became major issues. The policy of outsourcing care to private nursing homes, treated as outside the broader health and social care system, saw them excluded from the initial public health response. Going forward as suggested by the COVID-19 Nursing Homes Expert Panel Report August 2020 there needs to be greater integration and more clinical governance over all types of nursing homes. And as advocates for the elderly have been saying for a long time we need to ensure better community supports are in place to keep people in their own homes for as long as possible.

CLIMATE CRISIS AND COVID-19 The continuing climate crisis has been pushed to the side-lines during the Covid-19 global pandemic. But the link between the two is clearer than many might think. The capitalist drive for profits has produced industrial meat farming on a gigantic scale. More and more land is being taken over for agriculture with massive deforestation and biodiversity loss. Scientists agree that this has increased the possibility of new viruses such as coronavirus SARSCOV2 spreading from animals to humans. The same activities that most likely contributed to the emergence of Covid-19 also have devastating consequences for our climate. But the Covid-19 crisis also provides us with an opportunity to change how we live and work. Working from home has reduced transport emissions. Many people have found solace in nature and gardening. But we need change on an international scale to really combat the climate crisis, including massive reforestation, a ban on fossil fuels, and a reorganisation of society in the interest of people not profits.

People Before Profit NEWSLETTER Occupied Territories Bill. NEW GOVERNMENT. A NEW START ON HOUSING? In the February election, people rejected both Fianna Fáil and Fine Gael who are now at their lowest level of support in 100 years. Their refusal to tackle landlords and vulture funds pushed hundreds onto the streets during the last government, and now we are seeing more of the same. In the new programme for government the Fianna Fáil, Fine Gael, Green party coalition has drastically reduced their commitment to building social housing and have now rejected People Before Profit’s call to extend the ban on evictions.

We are now seeing landlords and vulture funds evicting tenants in the middle of a pandemic, with 10 deaths of homeless people in Dublin for July alone. In both South Dublin County Council and the Dáil, People Before Profit have been fighting to end this homelessness crisis. We have been fighting against the sell-off of public land to private developers, we have been fighting for more social housing and a complete ban on evictions.

Throughout this Coronavirus crisis, the Debenhams workers have continued their struggle for fair and decent redundancy packages. Eleven Debenhams stores operated in Ireland earlier this year but following the mass closures during the Covid-19 lockdown, the Irish Debenhams Stores went into liquidation with over 1000 staff directly affected. Offering the workers, the most basic statutory redundancy package of two weeks’ pay for every year worked, this was to be capped at 600 euro a week, plus one additional week added to the overall redundancy.

This month I introduced the Dying with Dignity Bill 2020. This legislation will give the legal and medical provision to those who have been diagnosed with a terminal illness which is progressive, incurable and likely to lead to the persons death the choice to have a peaceful end to their life. The bill itself was introduced in late 2015 but it never got to second stage because of the general election in February 2016. As of going to print the debate will happen in early October followed by a vote to decide the progress of the bill. A link to the bill is here. https:// www.oireachtas.ie/en/bills/bill/2020/24/

As of going to print nearly fifty people have been granted ministerial medical cannabis licences in the state. This gives the licence holder â&#x20AC;&#x201C; who in most circumstances is the parent of a child â&#x20AC;&#x201C; the legal right to secure the provision of a medical cannabis product. During the public health emergency, the Department of Health made provision for those licence holders to have their prescription delivered from the Netherlands by courier. This was welcomed but major problems still exist in relation to reimbursement which can be arbitrary, and the unacceptable delay in the formal commencement of the Medical Cannabis Access Programme. I will continue to raise this issue with the new health minister and the government. 0612

Traffic continues to be a serious problem in both Rathcoole and Newcastle. With further planning permissions being submitted for housing traffic issues will continue to increase in coming years. We need a huge investment in public transport to avoid this in the short term. In the long-term further infrastructure is required such as a second junction on to the N7. I will continue to fight for more public transport investment and road infrastructure. 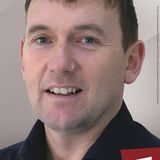