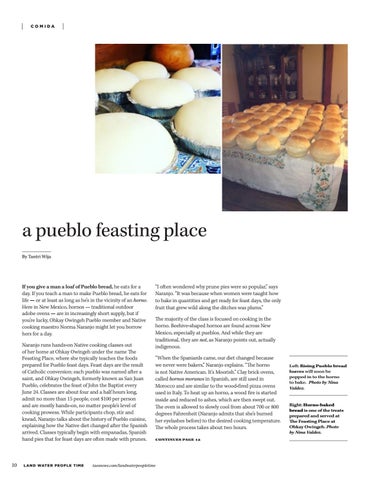 If you give a man a loaf of Pueblo bread, he eats for a day. If you teach a man to make Pueblo bread, he eats for life — or at least as long as he’s in the vicinity of an horno. Here in New Mexico, hornos — traditional outdoor adobe ovens — are in increasingly short supply, but if you’re lucky, Ohkay Owingeh Pueblo member and Native cooking maestro Norma Naranjo might let you borrow hers for a day. Naranjo runs hands-on Native cooking classes out of her home at Ohkay Owingeh under the name The Feasting Place, where she typically teaches the foods prepared for Pueblo feast days. Feast days are the result of Catholic conversion; each pueblo was named after a saint, and Ohkay Owingeh, formerly known as San Juan Pueblo, celebrates the feast of John the Baptist every June 24. Classes are about four and a half hours long, admit no more than 15 people, cost $100 per person and are mostly hands-on, no matter people’s level of cooking prowess. While participants chop, stir and knead, Naranjo talks about the history of Pueblo cuisine, explaining how the Native diet changed after the Spanish arrived. Classes typically begin with empanadas, Spanish hand pies that for feast days are often made with prunes.

“I often wondered why prune pies were so popular,” says Naranjo. “It was because when women were taught how to bake in quantities and get ready for feast days, the only fruit that grew wild along the ditches was plums.” The majority of the class is focused on cooking in the horno. Beehive-shaped hornos are found across New Mexico, especially at pueblos. And while they are traditional, they are not, as Naranjo points out, actually indigenous. “When the Spaniards came, our diet changed because we never were bakers,” Naranjo explains. “The horno is not Native American. It’s Moorish.” Clay brick ovens, called hornos morunos in Spanish, are still used in Morocco and are similar to the wood-fired pizza ovens used in Italy. To heat up an horno, a wood fire is started inside and reduced to ashes, which are then swept out. The oven is allowed to slowly cool from about 700 or 800 degrees Fahrenheit (Naranjo admits that she’s burned her eyelashes before) to the desired cooking temperature. The whole process takes about two hours. continues page 12

Left: Rising Pueblo bread loaves will soon be popped in to the horno to bake. Photo by Nina Valdez.

Right: Horno-baked bread is one of the treats prepared and served at The Feasting Place at Ohkay Owingeh. Photo by Nina Valdez. 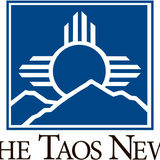