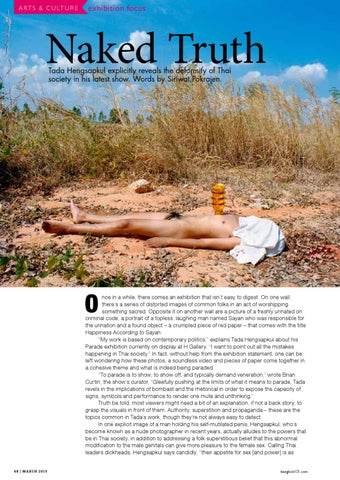 nce in a while, there comes an exhibition that isn’t easy to digest. On one wall, there’s a series of distorted images of common folks in an act of worshipping something sacred. Opposite it on another wall are a picture of a freshly urinated on criminal code, a portrait of a topless, laughing man named Sayan who was responsible for the urination and a found object – a crumpled piece of red paper – that comes with the title Happiness According to Sayan. “My work is based on contemporary politics,” explains Tada Hengsapkul about his Parade exhibition currently on display at H Gallery. “I want to point out all the mistakes happening in Thai society.” In fact, without help from the exhibition statement, one can be left wondering how these photos, a soundless video and pieces of paper come together in a cohesive theme and what is indeed being paraded. “To parade is to show, to show off, and typically demand veneration,” wrote Brian Curtin, the show’s curator. “Gleefully pushing at the limits of what it means to parade, Tada revels in the implications of bombast and the rhetorical in order to expose the capacity of signs, symbols and performance to render one mute and unthinking.” Truth be told, most viewers might need a bit of an explanation, if not a back story, to grasp the visuals in front of them. Authority, superstition and propaganda – these are the topics common in Tada’s work, though they’re not always easy to detect. In one explicit image of a man holding his self-mutilated penis, Hengsapkul, who’s become known as a nude photographer in recent years, actually alludes to the powers that be in Thai society, in addition to addressing a folk superstitious belief that this abnormal modification to the male genitals can give more pleasure to the female sex. Calling Thai leaders dickheads, Hengsapkul says candidly, “their appetite for sex [and power] is as 4 8 | M AR C H 2 0 1 3 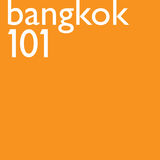