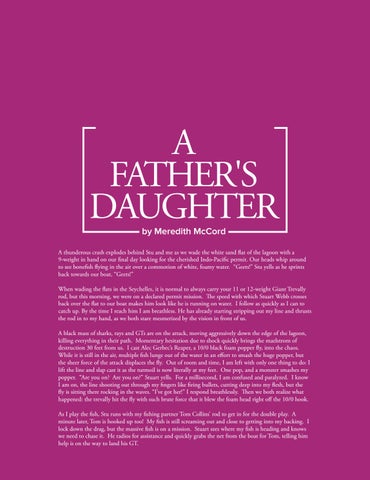 A FATHER&#39;S DAUGHTER by Meredith McCord

A thunderous crash explodes behind Stu and me as we wade the white sand flat of the lagoon with a 9-weight in hand on our final day looking for the cherished Indo-Pacific permit. Our heads whip around to see bonefish flying in the air over a commotion of white, foamy water. “Geets!” Stu yells as he sprints back towards our boat, “Geets!” When wading the flats in the Seychelles, it is normal to always carry your 11 or 12-weight Giant Trevally rod, but this morning, we were on a declared permit mission. The speed with which Stuart Webb crosses back over the flat to our boat makes him look like he is running on water. I follow as quickly as I can to catch up. By the time I reach him I am breathless. He has already starting stripping out my line and thrusts the rod in to my hand, as we both stare mesmerized by the vision in front of us. A black mass of sharks, rays and GTs are on the attack, moving aggressively down the edge of the lagoon, killing everything in their path. Momentary hesitation due to shock quickly brings the maelstrom of destruction 30 feet from us. I cast Alec Gerbec’s Reaper, a 10/0 black foam popper fly, into the chaos. While it is still in the air, multiple fish lunge out of the water in an effort to smash the huge popper, but the sheer force of the attack displaces the fly. Out of room and time, I am left with only one thing to do: I lift the line and slap cast it as the turmoil is now literally at my feet. One pop, and a monster smashes my popper. “Are you on? Are you on?” Stuart yells. For a millisecond, I am confused and paralyzed. I know I am on, the line shooting out through my fingers like firing bullets, cutting deep into my flesh, but the fly is sitting there rocking in the waves. “I’ve got her!” I respond breathlessly. Then we both realize what happened: the trevally hit the fly with such brute force that it blew the foam head right off the 10/0 hook. As I play the fish, Stu runs with my fishing partner Tom Collins’ rod to get in for the double play. A minute later, Tom is hooked up too! My fish is still screaming out and close to getting into my backing. I lock down the drag, but the massive fish is on a mission. Stuart sees where my fish is heading and knows we need to chase it. He radios for assistance and quickly grabs the net from the boat for Tom, telling him help is on the way to land his GT. 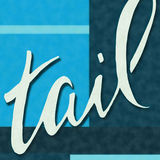