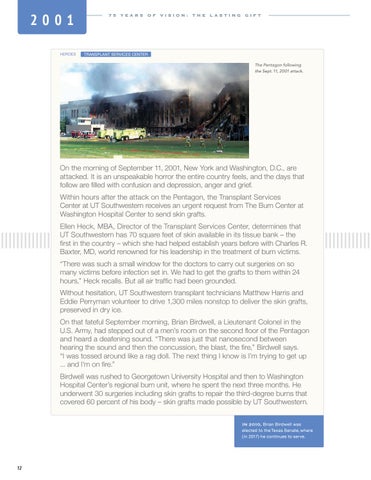 75 YEARS OF VISION: THE LASTING GIFT

On the morning of September 11, 2001, New York and Washington, D.C., are attacked. It is an unspeakable horror the entire country feels, and the days that follow are filled with confusion and depression, anger and grief. Within hours after the attack on the Pentagon, the Transplant Services Center at UT Southwestern receives an urgent request from The Burn Center at Washington Hospital Center to send skin grafts. Ellen Heck, MBA, Director of the Transplant Services Center, determines that UT Southwestern has 70 square feet of skin available in its tissue bank – the first in the country – which she had helped establish years before with Charles R. Baxter, MD, world renowned for his leadership in the treatment of burn victims. “There was such a small window for the doctors to carry out surgeries on so many victims before infection set in. We had to get the grafts to them within 24 hours,” Heck recalls. But all air traffic had been grounded. Without hesitation, UT Southwestern transplant technicians Matthew Harris and Eddie Perryman volunteer to drive 1,300 miles nonstop to deliver the skin grafts, preserved in dry ice. On that fateful September morning, Brian Birdwell, a Lieutenant Colonel in the U.S. Army, had stepped out of a men’s room on the second floor of the Pentagon and heard a deafening sound. “There was just that nanosecond between hearing the sound and then the concussion, the blast, the fire,” Birdwell says. “I was tossed around like a rag doll. The next thing I know is I’m trying to get up ... and I’m on fire.” Birdwell was rushed to Georgetown University Hospital and then to Washington Hospital Center’s regional burn unit, where he spent the next three months. He underwent 30 surgeries including skin grafts to repair the third-degree burns that covered 60 percent of his body – skin grafts made possible by UT Southwestern. IN 2010, Brian Birdwell was elected to the Texas Senate, where ( in 2017) he continues to serve. Part III of our historical series "75 Years of Vision". This edition highlights the exceptional advancements in health care and medicine mad...

Part III of our historical series "75 Years of Vision". This edition highlights the exceptional advancements in health care and medicine mad...