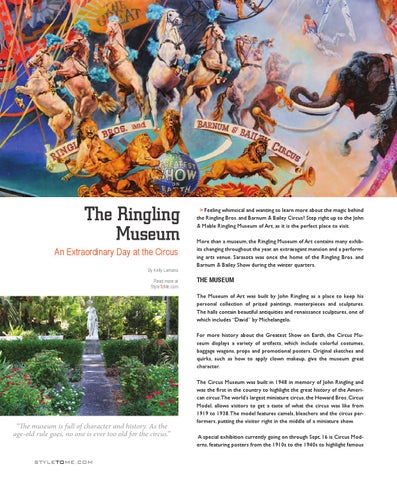 The Ringling Museum An Extraordinary Day at the Circus By Kelly Lamano Read more at StyleToMe.com

&gt; Feeling whimsical and wanting to learn more about the magic behind the Ringling Bros. and Barnum &amp; Bailey Circus? Step right up to the John &amp; Mable Ringling Museum of Art, as it is the perfect place to visit. More than a museum, the Ringling Museum of Art contains many exhibits changing throughout the year, an extravagant mansion and a performing arts venue. Sarasota was once the home of the Ringling Bros. and Barnum &amp; Bailey Show during the winter quarters.

THE MUSEUM The Museum of Art was built by John Ringling as a place to keep his personal collection of prized paintings, masterpieces and sculptures. The halls contain beautiful antiquities and renaissance sculptures, one of which includes “David” by Michelangelo. For more history about the Greatest Show on Earth, the Circus Museum displays a variety of artifacts, which include colorful costumes, baggage wagons, props and promotional posters. Original sketches and quirks, such as how to apply clown makeup, give the museum great character.

“The museum is full of character and history. As the age-old rule goes, no one is ever too old for the circus.”

The Circus Museum was built in 1948 in memory of John Ringling and was the first in the country to highlight the great history of the American circus.The world’s largest miniature circus, the Howard Bros. Circus Model, allows visitors to get a taste of what the circus was like from 1919 to 1938. The model features camels, bleachers and the circus performers, putting the visitor right in the middle of a miniature show. A special exhibition currently going on through Sept. 16 is Circus Moderns, featuring posters from the 1910s to the 1940s to highlight famous 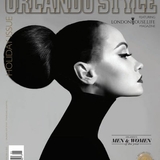