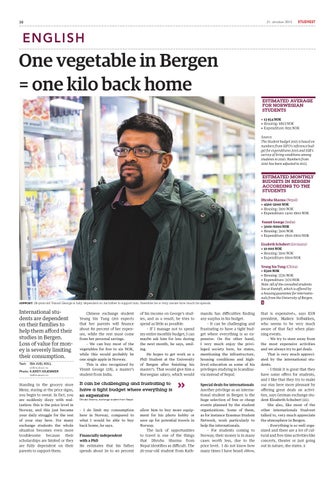 One vegetable in Bergen = one kilo back home ESTIMATED AVERAGE FOR NORWEGIAN STUDENTS • 13 954 NOK • Housing: 5803 NOK • Expenditure: 8151 NOK Source: The Student budget 2015 is based on numbers from SIFO’s reference budget for expenditures 2015 and SSB’s survey of living conditions among students in 2010. Numbers from 2010 has been adjusted to 2015.

International students are dependent on their families to help them afford their studies in Bergen. Loss of value for money is severely limiting their consumption. Text: IDA JUEL KOLL ijk@studvest.no Photo: KJERSTI KRÆMMER kk@studvest.no

Standing in the grocery store Meny, staring at the price signs, you begin to sweat. In fact, you are suddenly dizzy with realization: this is the price level in Norway, and this just became your daily struggle for the rest of your stay here. For many exchange students the whole situation becomes even more troublesome because their scholarships are limited or they are fully dependent on their parents to support them.

Chinese exchange student Yeung Sin Tung (20) expects that her parents will finance about 80 percent of her expenses, while the rest must come from her personal savings. – We can buy most of the vegetables for five to six NOK, while this would probably be one single apple in Norway. This is also recognized by Vinnit George (28), a master’s student from India.

of his income on George’s studies, and as a result, he tries to spend as little as possible. – If I manage not to spend my entire monthly budget, I can maybe ask him for less during the next month, he says, smiling. He hopes to get work as a PhD Student at the University of Bergen after finishing his master’s. That would give him a Norwegian salary, which would

It can be challenging and frustrating to have a tight budget where everything is so expensive Dhruba Sharma, exchange student from Nepal

– I do limit my consumption here in Norway, compared to what I would be able to buy back home, he says. Financially independent with a PhD He estimates that his father spends about 30 to 40 percent

allow him to buy more equipment for his photo hobby or save up for potential travels in Norway. The lack of opportunities to travel is one of the things that Dhruba Sharma from Nepal identifies as difficult. The 26-year-old student from Kath-

mandu has difficulties finding any surplus in his budget. – It can be challenging and frustrating to have a tight budget where everything is so expensive. On the other hand, I very much enjoy the privileged society here, he states, mentioning the infrastructure, housing conditions and highlevel education as some of his privileges studying in Scandinavia instead of Nepal. Special deals for internationals Another privilege as an international student in Bergen is the huge selection of free or cheap events planned by the student organizations. Some of them, as for instance Erasmus Student Network, work particularly to help the internationals. – For students coming to Norway, their money is in many cases worth less, due to the price level. I do not know how many times I have heard «Wow,

that is expensive!», says ESN president, Maiken Solbakken, who seems to be very much aware of that fact when planning events. – We try to steer away from the most expensive activities and we always try to get deals. That is very much appreciated by the international students. – I think it is great that they have some offers for students, and I like that they try to make our stay here more pleasant by offering great deals on activities, says German exchange student Elisabeth Schubert (21). She also, like most of the other internationals Studvest talked to, very much appreciate the atmosphere in Bergen. – Everything is so well organized and there are a lot of cultural and free time activities like concerts, theater or just going out in nature, she states. 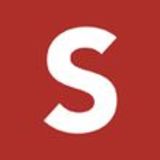