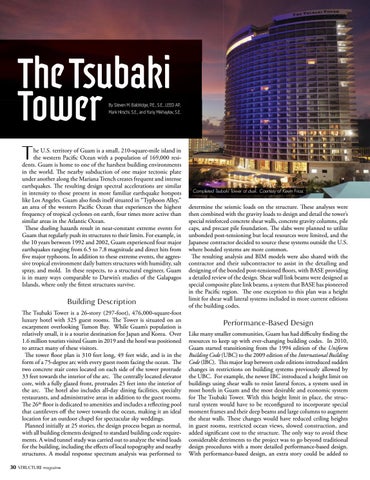 he U.S. territory of Guam is a small, 210-square-mile island in the western Pacific Ocean with a population of 169,000 residents. Guam is home to one of the harshest building environments in the world. The nearby subduction of one major tectonic plate under another along the Mariana Trench creates frequent and intense earthquakes. The resulting design spectral accelerations are similar in intensity to those present in more familiar earthquake hotspots like Los Angeles. Guam also finds itself situated in “Typhoon Alley,” an area of the western Pacific Ocean that experiences the highest frequency of tropical cyclones on earth, four times more active than similar areas in the Atlantic Ocean. These dueling hazards result in near-constant extreme events for Guam that regularly push its structures to their limits. For example, in the 10 years between 1992 and 2002, Guam experienced four major earthquakes ranging from 6.5 to 7.8 magnitude and direct hits from five major typhoons. In addition to these extreme events, the aggressive tropical environment daily batters structures with humidity, salt spray, and mold. In these respects, to a structural engineer, Guam is in many ways comparable to Darwin’s studies of the Galapagos Islands, where only the fittest structures survive.

Building Description The Tsubaki Tower is a 26-story (297-foot), 476,000-square-foot luxury hotel with 325 guest rooms. The Tower is situated on an escarpment overlooking Tumon Bay. While Guam’s population is relatively small, it is a tourist destination for Japan and Korea. Over 1.6 million tourists visited Guam in 2019 and the hotel was positioned to attract many of these visitors. The tower floor plan is 310 feet long, 49 feet wide, and is in the form of a 75-degree arc with every guest room facing the ocean. The two concrete stair cores located on each side of the tower protrude 33 feet towards the interior of the arc. The centrally located elevator core, with a fully glazed front, protrudes 25 feet into the interior of the arc. The hotel also includes all-day dining facilities, specialty restaurants, and administrative areas in addition to the guest rooms. The 26th floor is dedicated to amenities and includes a reflecting pool that cantilevers off the tower towards the ocean, making it an ideal location for an outdoor chapel for spectacular sky weddings. Planned initially at 25 stories, the design process began as normal, with all building elements designed to standard building code requirements. A wind tunnel study was carried out to analyze the wind loads for the building, including the effects of local topography and nearby structures. A modal response spectrum analysis was performed to 30 STRUCTURE magazine

determine the seismic loads on the structure. These analyses were then combined with the gravity loads to design and detail the tower’s special reinforced concrete shear walls, concrete gravity columns, pile caps, and precast pile foundation. The slabs were planned to utilize unbonded post-tensioning but local resources were limited, and the Japanese contractor decided to source these systems outside the U.S. where bonded systems are more common. The resulting analysis and BIM models were also shared with the contractor and their subcontractor to assist in the detailing and designing of the bonded post-tensioned floors, with BASE providing a detailed review of the design. Shear wall link beams were designed as special composite plate link beams, a system that BASE has pioneered in the Pacific region. The one exception to this plan was a height limit for shear wall lateral systems included in more current editions of the building codes.

Performance-Based Design Like many smaller communities, Guam has had difficulty finding the resources to keep up with ever-changing building codes. In 2010, Guam started transitioning from the 1994 edition of the Uniform Building Code (UBC) to the 2009 edition of the International Building Code (IBC). This major leap between code editions introduced sudden changes in restrictions on building systems previously allowed by the UBC. For example, the newer IBC introduced a height limit on buildings using shear walls to resist lateral forces, a system used in most hotels in Guam and the most desirable and economic system for The Tsubaki Tower. With this height limit in place, the structural system would have to be reconfigured to incorporate special moment frames and their deep beams and large columns to augment the shear walls. These changes would have reduced ceiling heights in guest rooms, restricted ocean views, slowed construction, and added significant cost to the structure. The only way to avoid these considerable detriments to the project was to go beyond traditional design procedures with a more detailed performance-based design. With performance-based design, an extra story could be added to