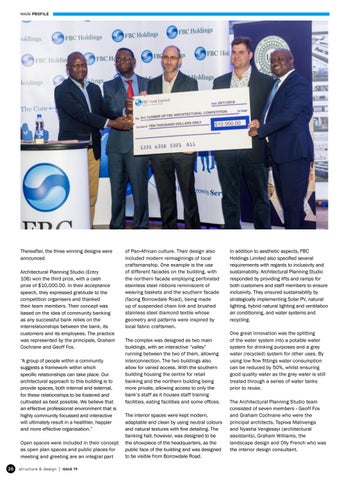 Thereafter, the three winning designs were announced. Architectural Planning Studio (Entry 106) won the third prize, with a cash prize of $10,000.00. In their acceptance speech, they expressed gratitude to the competition organisers and thanked their team members. Their concept was based on the idea of community banking as any successful bank relies on the interrelationships between the bank, its customers and its employees. The practice was represented by the principals, Graham Cochrane and Geoff Fox. “A group of people within a community suggests a framework within which specific relationships can take place. Our architectural approach to this building is to provide spaces, both internal and external, for these relationships to be fostered and cultivated as best possible. We believe that an effective professional environment that is highly community focussed and interactive will ultimately result in a healthier, happier and more effective organisation.” Open spaces were included in their concept as open plan spaces and public places for meeting and greeting are an integral part 26

of Pan-African culture. Their design also included modern reimaginings of local craftsmanship. One example is the use of different facades on the building, with the northern facade employing perforated stainless steel ribbons reminiscent of weaving baskets and the southern facade (facing Borrowdale Road), being made up of suspended chain link and brushed stainless steel diamond textile whose geometry and patterns were inspired by local fabric craftsmen. The complex was designed as two main buildings, with an interactive “valley” running between the two of them, allowing interconnection. The two buildings also allow for varied access. With the southern building housing the centre for retail banking and the northern building being more private, allowing access to only the bank’s staff as it houses staff training facilities, eating facilities and some offices. The interior spaces were kept modern, adaptable and clean by using neutral colours and natural textures with fine detailing. The banking hall, however, was designed to be the showpiece of the headquarters, as the public face of the building and was designed to be visible from Borrowdale Road.

In addition to aesthetic aspects, FBC Holdings Limited also specified several requirements with regards to inclusivity and sustainability. Architectural Planning Studio responded by providing lifts and ramps for both customers and staff members to ensure inclusivity. They ensured sustainability by strategically implementing Solar PV, natural lighting, hybrid natural lighting and ventilation air conditioning, and water systems and recycling. One great innovation was the splitting of the water system into a potable water system for drinking purposes and a grey water (recycled) system for other uses. By using low flow fittings water consumption can be reduced by 50%, whilst ensuring good quality water as the grey water is still treated through a series of water tanks prior to reuse. The Architectural Planning Studio team consisted of seven members - Geoff Fox and Graham Cochrane who were the principal architects, Tapiwa Mativenga and Nyasha Vengesayi (architectural assistants), Graham Williams, the landscape design and Olly French who was the interior design consultant. 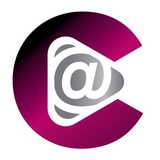