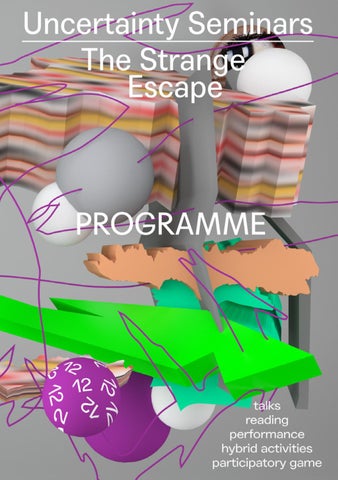 The Rodina | backdrop activation –––– The Stage Performative talk The Stage investigates graphic design discipline from the perspective of action, performance and theatre theory. The Rodina will introduce their “stage metaphor” for the first time. The Rodina (Tereza and Vit Ruller) is a critical design studio with an experimental practice drenched in strategies of performance art, play and subversion. Both in commissioned work and in autonomous practice, they activate and re-imagine a dazzling range of layered meanings across, below and beyond the surface of design — and back again. Studio The Rodina invents ways in which experience, knowledge and relations are produced and preserved. Interested in connections between culture, technology and aesthetics, they design events, objects and tools. Studio The Rodina is responsible for the designs of exhibitions and programs over-arching Attempts to Read the World (Differently) for Stroom. For Uncertainty Seminars: The Strange Escape they have, in addition, designed a spatial intervention that functions as the backdrop for the event. performers: Jungeun Lee and Marika Seo costumes &amp; backdrop work: Tessa Bekker www.therodina.com

Ramon Amaro &amp; Conrad Moriarty-Cole | audio experience –––– Movement and De/colonial Vibrations “Whenever movement is perceived, we are presented with a “double existence”: an objective registering of sensory input and a perceptual feeling of continuing movement. Brian Massumi, ‘The Archive of Experience’ According to Albert Michotte, movement has the uncanny ability ‘to survive the removal of its object’. We experience this movement as a momentum, to which nothing visible can coincide. In other words, what we perceptually see does not necessarily match the feeling of what we see. Put another way, what we see as the end of a linear history of colonial expansion is disrupted by sentiments of reflection, resistance, freedom, and spirituality that reveal the consistency of empire at present sites of labour, infrastructure, and engineering. Movement and De/colonial Vibrations — a downloadable audio project and self-guided walking tour compiled by Ramon Amaro (of SambaRhino) and Conrad Moriarty-Cole (of London-based audio collective, S.L.A.C.) — questions the ‘double existence’ of object locations, as Brian Massumi describes them, by re-articulating the objective registering of sensory input and the contradictions of perceptual feelings. In doing so, the project invites an aural and visual exploration of de/colonial The Hague using Diasporaic Afro-beats, soundscapes and spirituals that puncture the presence of momentum, and disrupt notions of frictionless colonial reconciliation. Ramon Amaro is Associate Lecturer in Critical Theory and Media Philosophy, Associate Lecturer in Visual Cultures,

and PhD researcher at Goldsmiths, University of London and tutor at the MA program Non Linear Narrative at the Royal Academy of Art, The Hague (KABK). He holds a Master´s degree in Sociological Research from the University of Essex and a BSe in Mechanical Engineering from the University of Michigan, Ann Arbor. Ramon is a former quality design engineer for General Motors and programmes manager for the American Society of Mechanical Engineers and has been an Assistant Editor for the SAGE open access journal Big Data &amp; Society. Ramon’s interests include philosophy, machine learning, and black study. He is currently research fellow in decolonising design at Het Nieuwe Instituut – for which he recently wrote this essay. Last Spring in London, he organised the Techno Resistance and Black Futures Festival. Get a feel and listen to the mixtape he made for that occasion. www.sambarhino.com Conrad Moriarty-Cole is a PhD researcher and associate lecturer in Cultural Studies at Goldsmiths College, University of London. His research intersects technology, imagination, and process philosophy, from the standpoint of which he is currently exploring how the unknowable is folded into decisional modes of reasoning. He is also a founding member of London sound collective S.L.A.C., who recently put together a mixtape for the Techno Resistance and Black Futures Festival, which you can listen to here.

Johanna Koljonen If one specific range of cultural practices captures the sense of rerouting social logic for other imaginaries, it might be that of Live Action Role Play (larp), and especially Nordic Larp. Media analyst, experience designer and LARP expert Johanna Koljonen explains how Larp fuels social resilience and imagination. Johanna Koljonen is a participation designer and theorist consulting on experience design with museums, the public sector and media companies. She is an authority on designing for safety and trust in participation, and lectures on analog experience design, Nordic Larp and changes in the media landscape. She co-founded the Alibis for Interaction Masterclass and the Nordic Larp Talks, both of which she hosts, and is the analyst of the Nostradamus Project, which charts and predicts the close future of the screen industries. In 2011, she received the Swedish Grand Journalism Award in the Innovator of the Year category. She is the author of the Oblivion High series of graphic novels, non-fiction books, digital games, and the 2016 play The Chicken Trial. www.participation.design

Uncertainty Seminars: DIM ––– A Transformation Game Friday 8 December 15 – 20h Transformation Games is an experimental discipline that attempts to re-imagine the world around us through alternative social models. During the afternoon, participants blend elements of roleplay, rituals and everyday routines into a new, jointly-created experience. Throughout the game, participants create, experience and learn alternative ways of thinking and interacting, touched by the thematic of Uncertainty Seminars: The Strange Escape. Participants are defined by more and more effective problemsolving skills, stronger empathy, and the acknowledgement and acquirement of different perspectives. By becoming fictional participants in a fictional world, one’s real life experience of the world, responsibilities, hierarchies and social dynamics are left behind. To get an informed view on the background and social and political potential of Live Action Role Playing (LARP), Stroom warmly recommends Paul Graham Raven’s article as published on Rhizome: This Is a Game: A (very) Brief History of Larp (2012) Áron Birtalan is a Hungarian artist who makes games and rituals in everyday environments. Working together with participants and their imagination as an artistic medium, he explores the nature of human interaction by creating collaborative experiences, called ‘Transformation Games’.

Through his work, Áron encourages people to tap into a playful territory, where art, games and magic mingle. His work draws upon the history of transformation through rites, and as a whole, the role of rituals in society. He currently lives in The Hague, running the experimental platform Secret Fiction. www.aronbirtalan.net 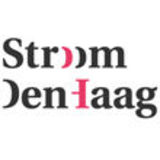