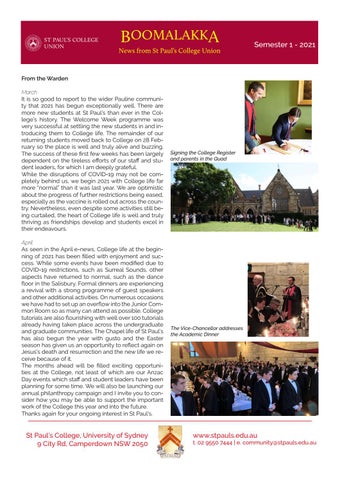 From the Warden March It is so good to report to the wider Pauline community that 2021 has begun exceptionally well. There are more new students at St Paul’s than ever in the College’s history. The Welcome Week programme was very successful at settling the new students in and introducing them to College life. The remainder of our returning students moved back to College on 28 February so the place is well and truly alive and buzzing. The success of these first few weeks has been largely dependent on the tireless efforts of our staff and student leaders, for which I am deeply grateful. While the disruptions of COVID-19 may not be completely behind us, we begin 2021 with College life far more “normal” than it was last year. We are optimistic about the progress of further restrictions being eased, especially as the vaccine is rolled out across the country. Nevertheless, even despite some activities still being curtailed, the heart of College life is well and truly thriving as friendships develop and students excel in their endeavours. April As seen in the April e-news, College life at the beginning of 2021 has been filled with enjoyment and success. While some events have been modified due to COVID-19 restrictions, such as Surreal Sounds, other aspects have returned to normal, such as the dance floor in the Salisbury. Formal dinners are experiencing a revival with a strong programme of guest speakers and other additional activities. On numerous occasions we have had to set up an overflow into the Junior Common Room so as many can attend as possible. College tutorials are also flourishing with well over 100 tutorials already having taken place across the undergraduate and graduate communities. The Chapel life of St Paul’s has also begun the year with gusto and the Easter season has given us an opportunity to reflect again on Jesus’s death and resurrection and the new life we receive because of it. The months ahead will be filled exciting opportunities at the College, not least of which are our Anzac Day events which staff and student leaders have been planning for some time. We will also be launching our annual philanthropy campaign and I invite you to consider how you may be able to support the important work of the College this year and into the future. Thanks again for your ongoing interest in St Paul’s.

Signing the College Register and parents in the Quad

The Vice-Chancellor addresses the Academic Dinner

Boomalakka, Semester 1 - 2021 Record number of Freshers welcomed On Monday 22 February the undergraduate community began Welcome Week with the arrival of 125 new faces. Drop-off included the opportunity to meet many new and not-so-new parents and these new families all heard from the Senior Student, Mr Matt Moran, and the Warden. A busy programme provided the Freshers with some excellent preparation for uni and expectations for life in college. In line with St Paul’s commitment to the recommendations of the Broderick Review, effort is given to enlightening these young men about matters of consent, harassment, manners, alcohol and drugs, rules of the College and the University, study habits and all the practical aspects of living in a large community. The College leaders and the Students’ Club Committee contributed to the personal development of the young men through many hours of presentations and discussion. The Secretary of the Students Club Committee, Mr Jacob Harris, provided the necessary crowd control and, with his colleagues, organisation of groups throughout the week. The SClub and the Junior Deans ensured that every Fresher attended all aspects of Welcome Week. For the students the highlights were the interactions with other colleges, particularly Sancta and Womens, that included a number of visits to and from. All the Freshers were introduced to the age-old tradition of Tip at 4.00pm─led on Day 1 by the Warden himself. A black tie event on Tuesday introduced the Freshers to one of the finer traditions of Paul’s life. All involved with Paul’s welcome this amazing group of gentlemen as the newest Paulines.

The extraordinary talents of Paulines continued to bring very pleasing results in 2020. The University of Sydney announced recently three Paulines who won University Medals. Mr Jake Slaytor (2018-20) completed a Bachelor of Arts (Honours) with a major in Ancient History. His first class Honours and scholarly achievement was recognised with the award of a 2020 University Medal in Arts in Social Science. Mr John-Patrick Asimakis (2015-18) graduated Bachelor of Arts in 2018 and Bachelor of Laws (Honours) in 2020. He was on the Dean’s List of Academic Excellence, awarded the Ian Joye Prize in Law, John George Dalley Prize No. 1A, the Nancy Gordon Smith Prize for Honours at Graduation and the Sir Dudley Williams Prize. In 2020 he was the University Medallist for Law. Mr Will Clarke (2017-18) completed a Bachelor of Science (Advanced Mathematics) (Honours). His first class Honours and achievements in maths were recognised with the award of the University Medal in Science in 2019. The College congratulates these three Paulines for their outstanding success and the contribution they made to the life of the College and the University. We look forward to reporting further on their progress in their chosen fields of endeavour.

Council election After the call for nominations sent to electors with known emails or addresses there were no new nominations. The Returning Officer has declared that Messrs James Bell and David Roberts and Revd Andrew Sempell have been elected for a 6 year term. Congratulations and many thanks to these and all our Fellows for the contribution they are making to the governance of the College.

Boomalakka, Semester 1 - 2021 Rawson success The College Cricket XI has broken a five-year drought, winning Rawson Cup Cricket for the first time since 2016. St Andrew’s College had been undefeated for the entirety of those five years, however, on the 17 March, the Androvians went down to the Paulines. The successful campaign comes off the back of a great pre-semester camp, combined with a noted attitude improvement at training, driven by Senior Student and Cricket Captain, Mr Matt Moran, in conjunction with convenors, Mr Steven Parras and Mr Sam McCutcheon. Rainfall from the night before and during the morning delayed the start of the match as both teams waited for the pitch to dry. The Paulines won the toss, and went on to bowl out St Andrew’s for 79, before chasing that total down with 6 wickets in hand. Congratulations to the 2021 Rawson Cup Cricket Champions!

Another win - Palladian St Paul’s opened the 2021 Palladian Cup campaign with a bang, placing first in the Solo Instrumental tournament. Saxophonist, and second year, Mr Ben Lerner, performed “Chasin’ the Trane” by John Coltrane on an alto saxophone. The piece was performed in standard blues form, but approached by Mr Lerner in a chordless trio context, without piano or guitar. “I approached the performance like a live gig and wanted to bring the same energy that I’d bring on the first tune of a gig, rather than unnecessarily flaunt technique, which is typically expected in competitions like the Palladian Cup,” said Mr Lerner after his set. Freshman, Mr Thomas Mah Chut, was the other representative from Paul’s. Mr Mah Chut performed “Evocation” by Isaac Albeniz on piano, and was very well received by the audience. Paul’s has not placed first in a Palladian Cup event since Mr Hugh Jameson’s Solo Vocal performance in 2018, and has not won the overall Cup since 2016. The final placings for solo instrumental were: 1st St Paul’s; 2nd St Andrew’s and 3rd Women’s.

St Paul’s Medics are Oxford-bound! Each year, fifty places are offered to non-Oxford international medical students to complete elective study at Oxford. For one term, Mr Hayden Randall and Mr Ash Dixon will work alongside experienced doctors at the renowned teaching and research hospital, the John Radcliffe Hospital, and enjoy all the opportunities and experiences of being a student at Oxford. Ash and Hayden are third year medical students at the University of Sydney and joined St Paul’s Graduate House in its inaugural year in 2019. Joining Ash and Hayden will be fellow Pauline Dr Tishan Wellalagodage who will reading for a DPhil in Critical Care Medicine at Queen’s College. There will be more on Tish in coming months

Boomalakka, Semester 1 - 2021 Alumni News 94-year-old Dr David Warden OAM (1948-52) visited College earlier this year. After serving in the RAN during WW2 he studied medicine before a career as a GP in Scone and then in Cambodia. He witnessed the opening of the Denison Wing and contributed much to College life. (Read move on the College website - Alumni News)

Mr John Halley SC, in College 1979-82, has been appointed as a judge of the Federal Court of Australia and took up office on 19 March 2021. John was admitted as a legal practitioner in 1986 and began his career at Allen Allen & Hemsley (now Allens Linklaters) and called to the NSW Bar in 1993. The College joins with the Australian legal community in congratulating John on this important appointment.

The generosity of many Paulines and friends who have given in 2020 has made a huge impact on the start of 2021. College has been able to support many more students than ever before because of these gifts, large and small. The diversity in the student population has been growing for the last few years but in 2021 we have students including many from regional areas, interstate and overseas. Many of the regional students cannot afford the cost of living in Sydney and without a place at Paul’s some would be unable to begin or continue a degree at Sydney University (or the other near-by universities the College now services). Much more news and information about What’s On at St Paul’s can be found on the College website. All Palines are encouraged to provide your email address and you will receive our regular eNews bulletins. Thank you for your interest in Pauls and your on-going suppoot. Richard Morgan Director of Community Development Deo Patriae Tibi

There is a genuine aspiration to provide scholarship support for the more needy students who live in regional and remote parts of Australia. This is being achieved in 2021 through the goodness of many Pauline supporters, parent-donors and philanthropic foundations. The appeal for funds last year has allowed the College to provide over $1.5M in scholarships and bursaries. To everyone who contributes to the Foundation and other funds we thank you. The 1970s Fresher Reunion (pictured left) was held on 17 December and we especially thank this hearty group of 68-year-olds who generously raised funds to make a group donation to the College. 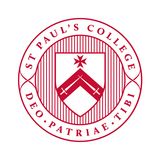 News for old Paulines and families

News for old Paulines and families