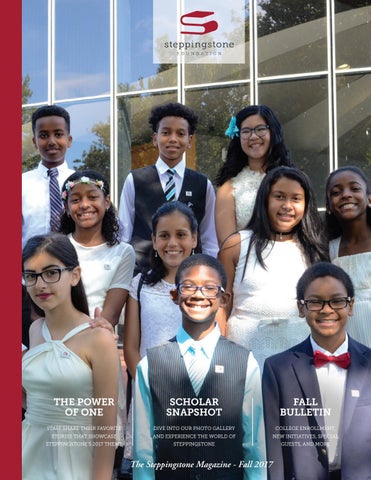 THE POWER OF ONE

DIVE INTO OUR PHOTO GALLERY

AND EXPERIENCE THE WORLD OF

Artwork by Aimy, a Steppingstone Scholar

MAGAZINE Did you know... JOURNEY

commits in 4th or 5th grade

to the hard work necessary to earn their college degree. In return, we commit to advising and supporting them

many students never have the opportunity to earn a college degree.

every step of the way.

of Scholars graduate from a four-year college within six years. Well above national and local rates.

Over the past year, Steppingstone has supported 1,600 Scholars and their families

from low-income Boston neighborhoods who want to make their mark on the world.

100 SCHOLARS START THEIR FIRST YEAR OF COLLEGE! Scholars have dedicated their summers and weekends to school. They’ve balanced homework with volunteer positions, part-time jobs, and family responsibilities. They’ve spent their free time attending college workshops, drafting essays, and discussing financial aid. And now, after years preparing for this moment, college is no longer an abstract goal. As each Scholar settles in to their new school - choosing courses, buying books, meeting their classmates, and preparing for the challenges ahead - the Steppingstone community will be there to support them.

SOME OF THE COLLEGES WELCOMING SCHOLARS THIS YEAR:

This fall, Scholars are: • focusing on their Steppingstone classes in addition to their regular schoolwork; • attending Saturday Mentoring and Study Hall (SMASH), getting a head start on homework and working with tutors and mentors who can help with tricky assignments; • meeting regularly with their Steppingstone Advisors;

THOMAS A. EDISON SCHOOL During the school year, College Success Academy Scholars from three AllstonBrighton schools (the Edison School, the Jackson/Mann School, and the Gardner Pilot Academy) meet here twice a week for after-school classes and study hall. Many CSA Scholars have made new friends from their neighborhoods after joining the Steppingstone community!

QUESTION: WHAT ARE SCHOLARS UP TO THIS FALL? ANSWER: A WHOLE LOT!

Photo by Katie, a Steppingstone Scholar

BUILDING OUR COMMUNITY Scholars, faculty, and staff capture fantastic memories throughout the year â&amp;#x20AC;&amp;#x201C; revealing the touching, spontaneous, and wacky moments that bring Steppingstone to life. Hereâ&amp;#x20AC;&amp;#x2122;s a peek at the fun that happens when Scholars step away from their books, take off their backpacks, and gather together as a community.

LEARNING ALL YEAR LONG When people hear that Steppingstone Scholars choose to spend their summers and free time in school, theyâ&amp;#x20AC;&amp;#x2122;re often surprised. And though itâ&amp;#x20AC;&amp;#x2122;s true that coming to Steppingstone means rigorous classes and homework, the excitement, camaraderie, and fun make the time fly by. Steppingstone was pleased to collaborate over the summer with the Boston Public Schools and Boston After School &amp; Beyond as a grantee of the Summer Learning Academies program.

THE POWER OF ONE COMMUNITY

Last year was my first summer at Steppingstone, and I was so impressed to see that despite coming to Milton hardly knowing anyone, and coming from all different schools and neighborhoods in Boston, all of the Scholars were so kind to one another. Although I am sure it was very nerve wracking and difficult to make friends at the start, I saw Scholars making the effort to introduce themselves to each other, lend a pencil in class, comfort someone on the soccer field when they got hurt, and sit with someone new at lunch. I believe true kindness requires bravery, and I have seen this demonstrated time and time again at Steppingstone. THE POWER OF ONE PURPOSE KRISTIN ARCANGELI - SENIOR DIRECTOR OF COUNSELING

The first summer that the College Success Academy (CSA) and The Steppingstone Academy (TSA) were together as one community was really powerful for me. In our first community time all together, we reflected on all of the things that we have in common and the power of our shared goals and experience. It made me proud to work at Steppingstone and with both CSA and TSA.

It was Heritage Day and you could feel the energy in the air. Scholars were sharing their stories with one another, learning about all the different countries that are found in our Steppingstone community. I cannot remember the last time I felt “The Power of One” in such full effect!

Earlier this spring, CSA Scholars had the opportunity to participate in the One Bead Program, which focuses on developing one idea that can improve the community where they live. Scholars generated a ton of ideas to attack huge challenges, one of which was achieving gender equality. The issue of gender inequality impacts us all, and Scholars were committed to raise the consciousness of the issue here in Boston. They designed a logo and printed shirts with a list of organizations working to promote gender equality. Scholars received their shirts this summer and became part of a movement that fights for equality.

“Steppingstone has its name for a reason— you have friends, teachers, advisors, and your family that help you make a path. It’s not called the ‘elevator academy’ where you just push a button and go straight to the top!” PRUDENCE

â&amp;#x20AC;&amp;#x153;Encouragement from families is the hearth, the main fire, of the Steppingstone commitment. Families, you all have given up so much for us. The only thing we can say is thank you for everything. There is no one that can replace you.â&amp;#x20AC;? CHRISTIAN 7th grade Scholar addressing Steppingstone families at the end of his second summer with Steppingstone

CHATTING WITH ESTEBAN GUTIERREZ ’12 Esteban Gutierrez ’12 is a junior at Milton Academy. When he isn’t busy preparing for college, you can find him performing in musicals, writing speeches, competing on the debate team, and mentoring younger students. We asked Esteban to share some insights about his time with Steppingstone and the program’s role in Boston. Here are his thoughts.

WHAT HAS BEING A SCHOLAR MEANT TO YOU?

Perseverance, in school and in life, is one of the most important attributes you can have. That was the biggest piece of advice I shared with Scholars.

Being a Scholar has helped cultivate something more in me, a big perseverance to push forward. Without Steppingstone I’d have been trapped in “Steppingstone is one of limbo. I wasn’t being challenged enough the most life-changing as a young student and I never would opportunities any student have gotten the same opportunities in Boston can have.” if I’d stayed on that trajectory. Now - ESTEBAN GUTIERREZ that I’m in high school, I talk to my Steppingstone Advisor all the time. The program continues to give me a ton of WHY IS STEPPINGSTONE resources, and I’m learning things that IMPORTANT TO BOSTON? are really important to my future. Steppingstone gives students the chance AS A TEACHING ASSISTANT to do things they’ve never done before. LAST SUMMER, WHAT Many of the Scholars I worked with INSIGHTS DID YOU SHARE this summer hadn’t had the opportunity WITH SCHOLARS? to study much science, and I loved seeing their smiles when they learned A lot of Scholars are nervous about something new. A love for learning is changing schools and walking into a one of the most powerful things you class that’s primarily white and elite. As can give to a student, and Steppingstone a TA, I wanted to support them through really does that. Steppingstone helps that transition and help them adjust to students enter worlds that seemed the cultures at their new schools. unimaginable. Scholars are working so hard, and the extra classes and responsibilities can be exhausting. As an older Scholar, I can show them that their work will pay off and help them go to college.

I decided to give back to Steppingstone because the program gave me one of the biggest gifts I could have in my life.

PHOTO AT TOP: Esteban speaks with Scholars about the power of learning from your mistakes. He shares the stage with the four pillars of Steppingstone’s community: Trust, Respect, Support, and Safety.

YOUR FALL BULLETIN FROM STEPPINGSTONE

“Everyone has a story,” said Andrea Campbell, City Councilor for District 4, speaking with Scholars during the first week of Steppingstone’s 2017 summer program. “I took my story, I took what happened to my brother, and I used it as fuel, as power to make a dream happen.” After losing her twin brother, who died in the custody of the Department of Corrections, Campbell ran for City Council and dedicated her career to ensuring every young person in Boston has access to the same resources she had growing up.

experienced tragedy in their lives, dozens of students lifted their hands into the air. She looked at these Scholars and said: “I challenge you to take your stories and anything that’s happened to you that’s been tragic and use it as fuel, as power, to do the very things you want to do in life.” Her message would stick in many Scholars’ minds. “It was very inspirational to hear about someone who had tragic things in her life,” said one fifth-grade Scholar. “She can relate to people like me, because I have some tragic stuff, and she still became successful. I’m just really happy about that!” And while success at school and in life is important to Steppingstone Scholars, Campbell wanted to make sure they knew it wasn’t only their achievements that defined their worth.

“Great schools, good mentors, effective teachers...opportunities that far too few of my “Each and every one peers, including my of you is here for a twin, are afforded.” unique purpose.” These goals made her the perfect guest speaker for Steppingstone’s morning assembly (known as Community Time), where she reached 300 Boston students. Though most Scholars in the room were only 10 or 11 years old, when Councilor Campbell asked who had

“You’re here because you have special gifts, special talents, that no one in this room has,” she said. “It’s your task and responsibility to take that story, use it as power, and find out what your gifts and skills are supposed to be used for.”

THE BRIAN J. CONWAY FUND FOR SCHOLARS In honor of Board Chair Brian Conway’s 20 years of leadership, commitment, and generosity, Steppingstone has established the Brian J. Conway Fund for Scholars, which will support services at the heart of our work while also ensuring the organization’s long-term sustainability. We will announce the fund and celebrate Brian at The Steppingstone Gala on November 9. Thank you to everyone who has already contributed to this crucial initiative. You are building a strong foundation for Steppingstone’s future, and we couldn’t be more grateful for your tremendous support.

If you’d like to contribute to the Brian J. Conway Fund for Scholars, please contact Kate Wood at kwood@tsf.org.

TUFTS PRESIDENT VISITS STEPPINGSTONE One of our favorite moments this summer was watching Scholars speak with Dr. Anthony Monaco, President of Tufts University. Scholars took full advantage of this insider’s look, peppering President Monaco with questions about career fields, scholarships, and all aspects of college life. With Scholars at the table ranging from 11 to 17 years old, this was a powerful opportunity for students of different ages and backgrounds to connect over common goals and enjoy a unique window into the college world.

â&amp;#x20AC;&amp;#x153;At Steppingstone, I broke out of my shell and made connections with people I will never forget. My friends, teachers, and advisors make me feel comfortable and part of the community. If I ever feel like my whole world is flipped upside down, I can always talk to them.â&amp;#x20AC;? KAYLAH

SCHOLAR ARTWORK &lt; We love Izzy’s cosmic interpretation of the journey to college, with Steppingstone as a space shuttle helping Scholars reach their goals. COVER PHOTO: Scholars celebrate after completing 14 months of academic prep with Steppingstone. Now heading into middle school, they’ll continue working with Steppingstone until they graduate from college. Let’s hear it for the class of 2028! 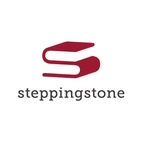