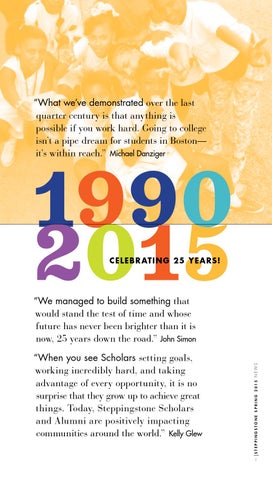 “What we’ve demonstrated over the last quarter century is that anything is possible if you work hard. Going to college isn’t a pipe dream for students in Boston— it’s within reach.” Michael Danziger

“When you see Scholars setting goals, working incredibly hard, and taking advantage of every opportunity, it is no surprise that they grow up to achieve great things. Today, Steppingstone Scholars and Alumni are positively impacting communities around the world.” Kelly Glew

“We managed to build something that would stand the test of time and whose future has never been brighter than it is now, 25 years down the road.” John Simon

25 YEARS AGO, MICHAEL DANZIGER AND JOHN SIMON IMAGINED A BRIGHTER FUTURE FOR UNDERSERVED STUDENTS IN BOSTON. “We recognized that if we could extend the opportunities

we had growing up to a group of motivated children, their lives would fundamentally change for the better,” says Simon. Confident that all students could achieve at high levels in a demanding, caring, and results-oriented environment, Danziger and Simon launched The Steppingstone Scholars Program in 1990. “It was a really exciting time. There was a ton of learning going on, and things were different every single day,” says Danziger. “I was learning as much as I was teaching,” remembers Simon. “But persistence, desire, and patience on the part of

25yrs the Scholars pulled us through the start of what has become an amazing program.”

“Steppingstone helped me access an education I might not have been able to otherwise. That opportunity not only changed my life for the better, it also changed my family’s and my children’s lives.” Tegan Leonard ’91 Since the pilot class of Scholars and families took a chance on Steppingstone, the organization has grown exponentially. Steppingstone now serves 1,600 Boston students who attend independent, public exam, and public schools. Affiliate programs in Philadelphia and Hartford serve hundreds of students each year, and the National Partnership for Educational Access (NPEA) supports 300 college access organizations, schools, and universities that collectively serve more than 200,000 underrepresented students across the country.

“I never dreamed that we would work with public exam schools, that we would start NPEA, that we would run the College Success Academy, but all of these programs have the same mission and are driven by the same values.” Michael Danziger

As Steppingstone’s reach has grown, the services provided to Scholars and their families have both deepened and improved. In nearly 23 years of working with Steppingstone, President Kelly Glew has helped shape this progress and is now the driving force behind Steppingstone’s continued excellence. “We want Scholars to succeed academically and personally,” says Glew, “so we provide Scholars with a holistic array of social/emotional and

Members of the pilot class of Scholars with Simon and Danziger. (Below) Kelly Glew with Tyler Alexander Andujar ’14 at commencement.

support services to help them succeed throughout high school, college, and in their careers.” This combination of strong academic preparation and long-term support continues to yield remarkable results: 80% of Steppingstone Scholars who enroll in a four-year college earn their degree within six years, compared to only 44% of Boston district graduates.*

These results are not just significant for individual Scholars, they impact the Boston community as a whole. “In order for Boston to maintain our leadership in fields like technology, medicine, and law, we need to continue to generate creative and driven leaders that will push these fields forward,” says Simon. “Steppingstone is helping educate those leaders.” Still looking toward a brighter future for Boston’s students, Danziger, Simon, and Glew are excited for Steppingstone’s continued growth and innovation and are grateful to everyone who made the last 25 years so very successful. “Steppingstone has been able to attract excellence at every level,” says Danziger, “from Scholars and their families, to staff, partner schools, donors, and Board members.” It is this village of excellent people (you!) that makes Steppingstone possible. And with your continued support, Steppingstone will keep striving to ensure that all hardworking students have the opportunity to achieve college and life success. *Northeastern Center for Labor Market Studies.

“Steppingstone has raised expectations within families and neighborhoods. Scholars are proving what is possible each day and showing what kinds of opportunities a great education can lead to.” John Simon

LYNETTE JONES HAS ALWAYS BEEN COMMITTED

When he was in fifth grade, a co-worker encouraged Lynette to look into The Steppingstone Academy. After Lynette learned Steppingstone would support Trent through college graduation, she knew she had to seize the opportunity to give her son a better future. For Lynette, seizing opportunities is also about helping others. “When you grasp an opportunity, you have to remember to put your hand back,” she says. And so, for nearly a decade, Lynette has worked as an Outreach Assistant for Steppingstone, helping to connect new families with the program. “I know there are students out there who don’t have access to the resources Steppingstone provides,” TO HER SON TRENT’S EDUCATION.

“Belmont Hill was the challenge of a lifetime,” says Trent, “but I never hesitated to turn to my Steppingstone network when I had a question or challenge to overcome.” Lynette also didn’t hesitate to reach out. When she saw Trent struggling in math, she picked up the phone. “All I had to do was call Steppingstone and Trent had a tutor that summer,” she says. Now a sophomore at The George Washington University, Trent is well on his way to earning his college degree and beginning a successful marketing career. And both Trent and Lynette credit Steppingstone with helping him achieve such success. “As much as I would have loved for Trent to go to college, I wouldn’t have been able to help him get there on my own,” reflects Lynette.

(From top left) Trent; Trent poses with Lynette at his graduation from Belmont Hill School in 2013; Trent Jones at his Steppingstone commencement ceremony in 2006. (From top right) Lynette Jones; Trent works with Mr. Waldman as a communications intern in 2014; Trent with fellow interns David Paradela ’06, Amber Oates ’06, and Vanessa Rodriguez ’06.

“Who wouldn’t want something better for their child?” Today, as Lynette speaks with prospective Scholars and families, she remembers Trent as a fifth grader: shy, quiet, and ready for a challenge. “I see him now and he’s glowing,” she says. “Trent knows who he is and the path he’s on—he has all of this confidence and is accomplishing so much. I couldn’t be more proud.”

“It’s hard to imagine my life now without Steppingstone. I hope the program will always remain an option for kids who want to change their futures. There are few organizations that have such a direct impact on their community.” Trent Jones ’06 Lynette Jones emigrated from Trinidad when she was 19 years old and has lived in Boston ever since. For nearly a decade, Lynette has worked as an Outreach Assistant for The Steppingstone Academy. Trent Jones ’06 is a member of the Belmont Hill School Class of 2013 and The George Washington University Class of 2017. Trent worked as a Teaching Assistant with Steppingstone in the summer of 2012 and as a communications intern with Steppingstone in the summer of 2014.

says Lynette. “Some parents in Boston can’t do all that we’d like for our kids. As a free program, Steppingstone helps us give our children more.” When Trent was accepted to Steppingstone, he joined what Lynette calls a “community of learners,” and his grades and confidence soared. After 14 months of hard work, Trent enrolled at Belmont Hill School with a full scholarship. But, even with the rigorous preparation he received from Steppingstone, the transition to an independent school was difficult. “When Trent first went to Belmont Hill he had this heavy backpack and was walking around a big campus he wasn’t used to—he was feeling lost,” remembers Lynette. “But Steppingstone was there for him; his Advisor would come and eat lunch with him and cheer him on at sporting events.”

GRADUATION SEASON This spring, more than 115 Scholars will graduate from high school with the Steppingstone community by their sides. Steppingstone will continue to provide these Scholars with the resources and opportunities they need to successfully transition to, and graduate from, colleges across the country, including Brown, Bucknell, Harvard, and Stanford. Visit www.tsf.org for a full list of college acceptances.

Archibaldo Soto ’08 (top right), Justin Jimenez ’08 (above left), and Hadiatu Jalloh ’07 (above right) graduated from high school in 2014 with Steppingstone Advisors cheering them on!

Congratulations to the more than 100 Scholars who will graduate from college this year! After graduation, these Scholars—now Steppingstone Alumni—will start their careers in fields like law, finance, engineering, and education, impacting communities near and far.

Come to Milton Academy this summer and see Steppingstone Scholars, faculty, and staff in action! This year, more than 400 Scholars will participate in Steppingstone’s rigorous summer program, honing their study and organizational skills and taking math, science, Latin, and English courses, among others. Email Kate Wood at kwood@tsf.org to schedule your visit.

THE SUCCESS EFFECT In the last 25 years, Steppingstone Scholars and Alumni have accomplished amazing achievements, demonstrating what hard work and determination can lead to. We are inspired by their successes and the ripple effects they create throughout Boston and around the world. We call this movement THE SUCCESS EFFECT, and your support makes it possible. As we celebrate 25 years of THE SUCCESS EFFECT, we are also looking ahead to Steppingstone’s future. In the coming years, we look forward to serving new communities, increasing the number of Scholars we can support, connecting young Alumni with meaningful career-building opportunities, and helping to strengthen the field of college access by challenging colleagues to share best practices and new thinking. We hope you’ll join us as we celebrate this exciting milestone, and that you’ll continue to support the success of Steppingstone Scholars and Alumni for the next 25 years.