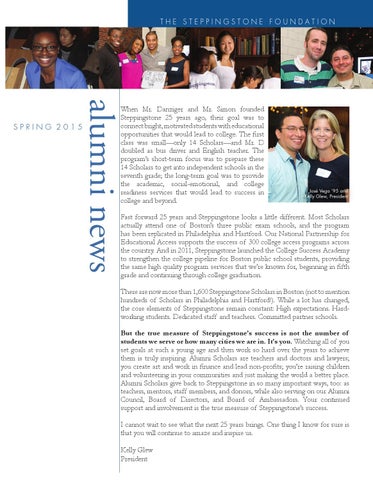 When Mr. Danziger and Mr. Simon founded Steppingstone 25 years ago, their goal was to connect bright, motivated students with educational opportunities that would lead to college. The first class was small––only 14 Scholars––and Mr. D doubled as bus driver and English teacher. The program’s short-term focus was to prepare these 14 Scholars to get into independent schools in the seventh grade; the long-term goal was to provide the academic, social-emotional, and college readiness services that would lead to success in college and beyond.

Fast forward 25 years and Steppingstone looks a little different. Most Scholars actually attend one of Boston’s three public exam schools, and the program has been replicated in Philadelphia and Hartford. Our National Partnership for Educational Access supports the success of 300 college access programs across the country. And in 2011, Steppingstone launched the College Success Academy to strengthen the college pipeline for Boston public school students, providing the same high quality program services that we’re known for, beginning in fifth grade and continuing through college graduation. There are now more than 1,600 Steppingstone Scholars in Boston (not to mention hundreds of Scholars in Philadelphia and Hartford!). While a lot has changed, the core elements of Steppingstone remain constant: High expectations. Hardworking students. Dedicated staff and teachers. Committed partner schools. But the true measure of Steppingstone’s success is not the number of students we serve or how many cities we are in. It’s you. Watching all of you set goals at such a young age and then work so hard over the years to achieve them is truly inspiring. Alumni Scholars are teachers and doctors and lawyers; you create art and work in finance and lead non-profits; you’re raising children and volunteering in your communities and just making the world a better place. Alumni Scholars give back to Steppingstone in so many important ways, too: as teachers, mentors, staff members, and donors, while also serving on our Alumni Council, Board of Directors, and Board of Ambassadors. Your continued support and involvement is the true measure of Steppingstone’s success. I cannot wait to see what the next 25 years brings. One thing I know for sure is that you will continue to amaze and inspire us. Kelly Glew President

notes Class of 1992 Ivan DeJesus ’92 was promoted to senior control specialist at John Hancock Financial Network in their Annuities group.

and is now working towards her bachelor’s degree at UMass Boston. Marcus Haymon ’95 received a joint MBA from MIT and MPA from Harvard. Marcus is now living in Washington, D.C., where he works for Dalberg Global Development Advisors.

This past summer, Cindy Nguy ’97 interned with Adobe and has now returned to UCLA Anderson for her second year. Congratulations to Emely Orellana de Bautista ’97 who married Douglas Bautista in September. Emely is also working as an outreach assistant with Steppingstone.

Class of 1993 Dr. Alicia Genisca ’93 moved from Ethiopia to Colombia and will continue her work with the Baylor Global Health Corps. In Colombia, her work is focused primarily on decreasing infant and under fiveyear-old morbidity and mortality in the La Guajira region of the country. Congratulations to Ashleigh Jones ’93 on her promotion to senior designer/design lead for new builds and refurbishments at Carnival Cruise Lines. Ashleigh designs and develops projects for a fleet of 24 ships.

Class of 1994 Larry Waters ’94 graduated from Emory with a master’s in divinity. He is now working at Emory in the Office of Disability Resources. Earlier this year, Rochelle Williams-Belizaire ’94 accepted her dream job as a program director of the Women’s Moon Shot Program at MD Anderson Cancer Center in Houston, Texas. She and her husband Jonas moved in June and are enjoying the weather.

Class of 1995 Congratulations to Donavan Brown ’95 and Lauren Brown who welcomed their son, Wesley. Jennifer Charles ’95 received her associate’s degree in health sciences

Congratulations to J.P. Jacquet ’95 and his wife Dr. Mary Breda who welcomed their daughter, Mary Ann. Fabian Mora ’95 is now working at Cengage Learning as a business systems analyst.

Class of 1996 Ifeanyi Anidi ’96 graduated from Johns Hopkins with his MD/Ph.D. and started his residency in internal medicine at the Hospital of UPenn.

It was great to see Stephen Mak ’97 at Alumni Visit Day last summer.

Class of 1999 Stephanie Crawford ’99 was featured in an article in The Boston Globe about first-year teachers. Stephanie teaches second- and thirdgrade students at the Josiah Quincy Elementary School in Chinatown.

Joy Kogut ’96 is supporting students with diverse needs at Boston Community Leadership Academy. She is also coaching academic teachers on how to adapt content for these students.

Class of 1997 Thank you to Offiong Bassey ’97 who performed at Steppingstone’s Spring Swing event last May. D’Lynn Jacobs ’97 accepted a new role with the United States Peace Corps building their diversity programs. D’Lynn also joined the board of the Gay, Lesbian and Straight Education Network.

Stephanie Crawford in The Boston Globe.

Class of 2000 Tiye Cort ’00 received her M.A. in teaching from Emmanuel College, and was the commencement speaker. Tiye worked as an English teacher with The Steppingstone Academy over the summer and is now teaching 10th and 11th grade at Dublin School. Chuks Ekwelum ’00 is starting a Ph.D. program in Educational Leadership & Policy Analysis at the University of Wisconsin-Madison this fall. Jasmine Hicks ’00 was invited to dine with President Obama and a small group of young professionals at a local cafe, where they discussed how to get more young people to sign up for coverage under the Affordable Care Act. Their meeting was also featured in The Atlantic. Jasmine Hicks with President Obama

Adrian Kozikowski ’00 graduated from UMass Boston with a B.S. in finance and economics. Meaghan McGoff ’00 works for Boston Public Schools as a 1:1 paraprofessional in special education classrooms. Katherine Mella ’00 graduated from MIT with a master’s degree in city planning. Nicolle Toledo ’00 is a research assistant with Veterans Affairs Center for Healthcare Organization and Implementation Research. Tran Vu ’00 returned to Boston and is working at WGBH as an outreach coordinator for a Vietnam/Vietnam War film. Tran has been traveling to interview veterans. Dr. Mariaah Williams ’00 is officially an MD after graduating from Meharry Medical College.

Class of 2001 Max Clermont ’01 participated in Alumni Visit Day while on vacation from his work as an associate at 270 Strategies in Chicago. Maria Javier ’01 has been working in North Carolina as a stepdown cardiothoracic nurse, and is in graduate school pursing a career as a family nurse practitioner.

Nyadenya Inyagwa ’00 is starting his own business, a Christian Leadership Group. His aim is to connect his city spiritually.

Amity Paye ’01 is the web editor for the New York Amsterdam News. She also freelances as a reporter for publications such as The National, The Root, and DNA Info. In addition, she is now vice president of print for the New York Association of Black Journalists. Samantha Salfity ’01 is the Arthur Vining Davis Fellow at the Boston Museum of Science, where she hosts experiments and live animal presentations for visitors. In addition, she began a master’s degree in ecological teaching and learning at Lesley University this past July.

Class of 2002 Ebele Anidi ’02 is finishing up his second year with Teach for America as a sixth grade math teacher in Chicago. This fall, he will be pursuing an M.S. in public health at the Johns Hopkins Bloomberg School of Public Health. He will be completing the Health Systems program in the International Health department. Vicky Arroyo ’02 is currently teaching at the George F. Kelly School in Chelsea and spent this past summer teaching at Steppingstone. Vicky Arroyo with her students at The Steppingstone Academy

Do you have a story or picture to share with us? Contact Kate Lucey at klucey@tsf.org or 617.423.6300 ext. 224 to let Steppingstone know what you’ve been up to. We love hearing from you!

Jamica Cropper-Pam ’02 is earning her master’s degree in marriage and family therapy at LaSalle University. She also works as a therapeutic support staff member and an intern therapist at the Center for Families and Relationships in Philadelphia. In addition to working as an intern with Gilbane Construction, Jorge Goncalves ’02 has been doing business development for his family’s restaurant and studying to obtain his engineering license. Stephany Muñoz ’02 is finishing up her second year with Teach for America at the UP Academy Charter School, where she is a sixth grade inclusion teacher in math and ELA.

University to obtain his master’s in biomedical engineering.

Elisa Cheng ’03 graduated from Northeastern’s dual-degree program with a bachelor’s and master’s degree in electrical engineering. She is now working as an electrical engineer at Jacobs Global Buildings Design Division. Erica Cuevas ’03 graduated from a dual-degree program from Boston University, with a bachelor’s degree in health sciences and a master’s of public health. She accepted a position as an administrative coordinator for Inpatient Family Medicine at Boston Medical Center.

Stephany Muñoz with her class

Jon Huang ’03 is working with Teach for America as a middle school math teacher. He will be obtaining his master’s in education from Boston University.

Julia Cardoso ’04 is enrolled in a graduate program at Simmons College and became a mental health associate with the Academic and Behavioral Clinic. Jeannie Do ’04 is in her final year of an accelerated dual-degree program from Boston University. In January 2014, she received her bachelor’s degree in health sciences, and she is now working toward her master’s of public health, to be completed in early 2015. Dean Ebozue ’04 started off his first summer as a graduate from Boston College with a full-time position at Putnam Investments as a dealer market service representative. Marysabel Mejia ’04 graduated from Boston University with a B.S. in speech, language, and hearing sciences. Gloria Ojimba ’04 accepted a position as a math teacher at Chelsea High School with Teach for America. Megan Riley ’04 is working as a marketing associate at Deloitte Consulting Firm.

Nikolas Medrano ’03 graduated from Dartmouth College and moved to San Francisco to work in people operations at Box, a cloud collaboration technology company.

Jon Huang on his first day as a teacher

Mercedes Jackson ’03 became a certified nursing assistant and is enrolling at Roxbury Community College to become a registered nurse.

In her senior year at UMass Boston, Teori Shaw ’04 continues her volunteer work in the community. She works at Mass Housing Partnership, volunteers through Boston Cares, and tutors GED students in Roxbury.

Thank You! We’re honored to have such an engaged Alumni community. You constantly impress us with your generosity and commitment to supporting each other and younger Scholars. Thank you! The following Alumni donated in 2014 (names in bold denote leadership gifts of $500 or more): Kevon Boatswain ’91 Ivan DeJesus ’92 Dr. Alicia Genisca ’93 Eric Andrew ’94 Kevin Tran ’94 Rochelle Williams-Belizaire ’94 Donavan Brown ’95 Jennifer Charles ’95 Stephond Goler ’95 Marcus Haymon ’95 My Dzi Le ’95

Steppingstone’s Annual Gala We were thrilled to have so many Alumni join us at the 2014 Gala! Held at the Fairmont Copley Plaza, the event raised more than $1.2 million to support Steppingstone programs. Guests heard from Steppingstone Board Chair Brian Conway, Kelly Glew, Michael Danziger, and current Scholar Valentine Ora ’07. D’Lynn Jacobs ’97 was among the evening’s honorees. Reggie Farina ’94 presented D’Lynn with the There’s No Place Like Home Award, which she received in recognition of her personal and professional commitment to improving her community.

D’Lynn Jacobs ’97 with her mother

Both Darian and Derek credit Steppingstone with helping them enroll in and excel at The Roxbury Latin School. Now a classics teacher and Class V Master at his alma mater, Darian serves as a role model for the student body, including Derek and seven other Steppingstone Scholars.