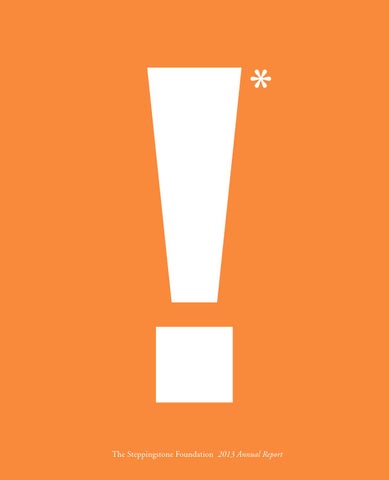 The Steppingstone Foundation will change the lives of 1,600 kids this year.*

With your support, we run college-access programs in underserved Boston communities. You help kids in challenging circumstances become Scholars. In Boston, fewer than 20% of district high-school graduates complete a fouryear college degree. At Steppingstone, weâ&#x20AC;&#x2122;re not willing to accept that statistic. So we provide free college-access programs to families who dream of college for their kids, but face serious obstacles. Itâ&#x20AC;&#x2122;s our job to help Scholars navigate those barriers on the way to fulfilling their own high aspirations. How? We start with students in elementary school, and work with each Scholar right through college graduation.

In those 10-plus years, we provide the academic, social, emotional, and college-readiness services that lead to this: 92% of Scholars enroll in a fouryear college, and 80% earn their degrees within six years. Thatâ&#x20AC;&#x2122;s well above national and local rates, especially for their demographic group. For 24 years, Steppingstone has offered a demanding environment that motivated, striving kids respond to. So, thank you. Yes, you! The value and impact of your donation is remarkable.

It’s not a level playing field.*

Here’s what we do to even things out. We provide rigorous academic preparation and enrichment. We work with new Scholars when they’re 10 to 12 years old, because we want them ready for challenging academics in middle school. Our summer program is the key to Scholars’ success, because without access to summer learning opportunities, underserved students can fall far behind their peers. Not Steppingstone Scholars. We provide social and emotional support to Scholars and their families. Sometimes what’s going on in a Scholar’s life outside the classroom makes success in school extremely difficult, even for the most motivated students. Steppingstone counseling services are up to the task of supporting them. Scholars and their families work with Advisors who foster their progress— from the very first day we welcome them to Steppingstone, until they earn their college diplomas.

We provide college knowledge. If college is not in a family’s experience, they don’t know the drill—and the drill begins well before any test or application. Students have to see the link between their hopes for the future and the specifics of what they need to be doing right now. From college tours to SAT prep to the all-important maximizing of financial aid sources, Steppingstone provides that know-how to Scholars and their families and guides them every step of the way. We provide high expectations. That’s what talent and commitment and high aspirations respond to. We watch it happen every day!

Look closely. You’ll see the multiplier effect in action. The Steppingstone journey begins with an individual, and ends with a Scholar equipped for achievement, a family encouraged, schools renewed, and an education landscape forever changed. What started with a handful of schools and students has sprouted: almost 200 new Scholars join Steppingstone each year, and we now partner with more than 40 schools throughout the region. Our newest program—the College Success Academy—allows us to reach more students in the communities that need us most.

What started in Boston has grown into the National Partnership for Educational Access, which connects college-access organizations across the country. We challenge our colleagues to share best practices, experiences, and new thinking. What started with us continues and grows with you. Do you believe that leveling the educational playing field changes lives? We do. If you agree, there’s no better place than Steppingstone to invest your support. {7}

Where are these kids headed?* Steppingstone partners with independent, Catholic, and public schools. THE STEPPINGSTONE ACADEMY PLACEMENT SCHOOLS

We can’t do it without you. Really.*

Amy Smith Berylson and John Berylson established The Berylson Fund for Leadership Development to provide Steppingstone’s staff with high-quality professional development opportunities that would enable them to better serve the needs of a growing organization. In 2013, the Fund generously supported Steppingstone’s senior management team’s participation in The Bridgespan Group’s “Leading for Impact,” an intensive six-month strategic management program designed to strengthen nonprofit leadership teams, build strategic decision-making capacity, and enhance team dynamics. We are grateful for the support of the Berylson Fund, which continues to foster excellence and high levels of professional competency among Steppingstone’s hard-working staff.

Steppingstone would like to thank the following corporations for their generous support: $5,000+

We are grateful to the following organizations for their support of NPEA:

Through the Champion A Scholar program, these donors have made a gift that covers the cost of one Scholar’s Steppingstone journey:

Among the skills we foster in Scholars: time management, effective study habits, organization, decision-making, and perseverance.

Founded in 1990, The Steppingstone Foundation is a not-for-profit organization that develops and implements programs that prepare underserved students for educational opportunities that lead to college success. Based on the premise that, regardless of circumstance, children can achieve at high levels with effective preparation and support, Steppingstone programs emphasize rigorous standards and achieve meaningful results.

The Steppingstone Foundation would like to thank the following firms that donated or discounted their services to make the design and printing of this annual report possible: BARTON PRODUCTIONS DAISY SCOTT COPYWRITING DI SANTO DESIGN PRINTSYNERGY SOLUTIONS

The Steppingstone Foundation will change the lives of 1,600 kids this year. With your support, we run college-access programs in underserve...

The Steppingstone Foundation will change the lives of 1,600 kids this year. With your support, we run college-access programs in underserve...