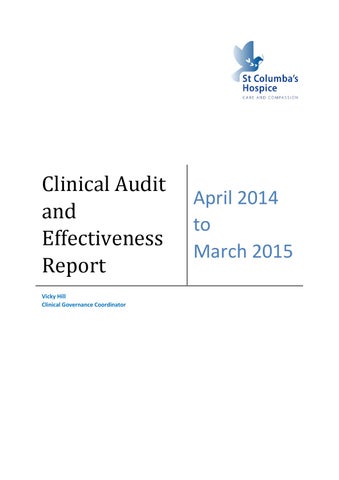 This report addresses audit and effectiveness activity at St Columba’s Hospice from April 2014 to March 2015. Again, similar to previous years, some audit activity has centred on meeting the requirements set out by the National Care Standards for Hospice Care and NHS Quality Improvement Scotland Clinical Standards (NHS Quality Improvement Scotland, 2002). The hospice is committed to meeting the requirements set out in the Quality Assessment Framework. Clinical Governance continues to be central to the hospice culture and practice and the structure has been reviewed and adapted during 2014-2015.

This review resulted in new groups forming, some groups remaining with an adapted remit and some groups ending. To support all staff in working within the new Clinical Governance Structure, an education initiative looking at Health and Safety is being

Audit and effectiveness priorities are identified and reviewed by the Clinical Governance Group. Audit and Effectiveness projects will continue to be the responsibility of clinicians. The Clinical Governance Coordinator will provide, where necessary, support for staff in planning, developing and delivering audit projects and disseminating the results.

Provide safe and effective patient care Patient centred care is at the centre of all work within the Clinical Governance Structure. There has been a wide range of work carried out by the membership of many of the groups within the hospice. These include: SIGN 106 (Control of pain in adults with cancer): Following on from audit work in previous years, the SIGN 106 group completed three cycles of audit and one within the Day Hospice.

Development of a Person Centred Care at the End of Life Document: A working group critically reviewed the literature and undertook a rigorous consultation with clinical staff, nonclinical staff, volunteers, patients and families to elicit views on what mattered most at the end of life. An openness from colleagues across Lothian to share their work and review the work of SCH was invaluable. This document was introduced in December 2014 with an initial review taking place 6 weeks post implementation.

Preferred Place of Death Audit: The hospice was asked by the Lothian Managed Clinical Network to audit practice of identifying and achievement of Preferred Place of Death for patients who had died in all care services provided by all hospices services. Monthly audits were carried out until June 2014 and reported to the End of Life Care Group. A journal club session has been delivered to inform staff of the results and changes to our documentation practice as a result of the audit. In addition, a poster presenting the findings of the audit has been presented at The Scottish Partnership in Palliative Care Conference in September 2015.

Enhance lines of communication and responsibility

The Clinical Governance Structure identifies the responsibilities and reporting mechanisms of all groups. All minutes of meetings are reviewed by the hospice directors.

Effective communication is vital in delivering a high standard of care for patients and families who use St Columbaâ&#x20AC;&#x2122;s Hospice services. Side by Side â&#x20AC;&#x201C; St Columbaâ&#x20AC;&#x2122;s Hospice Participation Strategy has been implemented to enhance feedback, engagement and communication with patients, families, members of the public, staff and volunteers. An action plan, to be completed by December 2015, will ensure that participation will be integral to practices within the development and delivery of all hospice services.

In conjunction with the review with the clinical governance structure the risk policy was reviewed resulting in the development of a risk management strategy, a new accident and incident reporting system (due to be implemented in May 2015) and a forthcoming review of risk registers and risks assessments. The following are examples of work carried by the hospice to mitigate against risk:

Policies and Procedures: There is a system in place for the review of clinical and operational policies. New policies developed include: accident and incident reporting policy and management of significant events policy. Human resources policies and medicine management policies are monitored and reviewed by the Human Resources Manager and the Clinical Pharmacist respectively.

Reducing the risk of falls: A new fall incident form has been developed and will be introduced in May 2015. All staff throughout the hospice will receive training in reporting all accidents and incidents as part of the “Health and Safety for All” study day. All incidents, including falls, are reported monthly to Hospice Directors. In addition, the Hospice Physiotherapist is supporting work around falls prevention.

Management of medicines: Drug incidents are reported and discussed at the monthly drug incident meeting. The Medicines Management Group have carried out audit activity reviewing drug omissions which has resulted in a change of practice. This audit has completed its seventh cycle, to ascertain if the change in practice has benefited patient care and if the change has been effective and sustained.

Increase the effectiveness of working across departments

All audit and effectiveness projects promote multi-disciplinary and cross departmental working where appropriate. A number of audits have demonstrated this: 

Clinical Audits Carried Out Between April 2014- March 2015 A wide range of audit topics have been addressed during this period (see appendix 3). The projects continue to have a multidisciplinary approach, being led by clinicians with support from the Clinical Governance Coordinator. Many of the audit projects are either new audits or planned re-audits to be carried out in the near future, thus completing the audit cycle.

Conclusion St Columba’s Hospice has continued to undertake a large number of multidisciplinary clinical audits and effectiveness projects. Again, as in previous years, these have included a mixture of new audit and effectiveness topics and re-audits of previous projects. It is hoped that the outcomes of the audits will facilitate the hospice in developing and evidencing the standard of care which patients experience throughout their involvement with hospice services. The new Clinical Governance Structure has been designed to support this. This report illustrates the key role the whole hospice team have in positively enhancing care delivery and demonstrates the importance that clinical audit has in the Hospice’s commitment to enhancing patient care. Central to the success of continuing to develop safe and effective patient centred care lies in the continuing development of the working between departments, disciplines and groups within St Columba’s Hospice.

Board of Governors New Build Committee

Person Centred Care at the End of Life February 2015 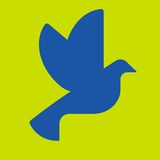