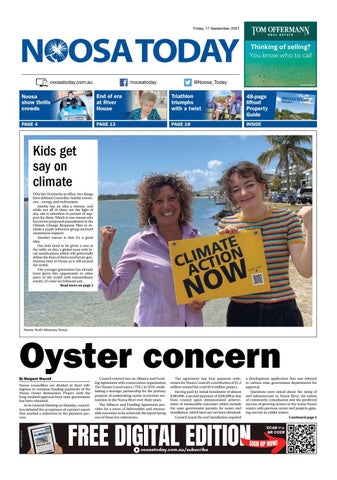 End of era at River House

Triathlon triumphs with a twist

Kids get say on climate Over her 18 months in office, two things have defined Councillor Amelia Lorentson – energy and enthusiasm. Amelia has an idea a minute, and while not all of them see the light of day, she is relentless in pursuit of support for them. Which is one reason why her recent proposed amendment to the Climate Change Response Plan to include a youth reference group received unanimous support. Another reason is that it’s a good idea. Our kids need to be given a seat at the table on this, a global issue with local ramifications which will potentially define the lives of theirs and future generations here in Noosa as it will around the world. The younger generation has already been given this opportunity in other parts of the world with extraordinary results. It’s time we followed suit. Read more on page 3

Noosa councillors are divided in their willingness to continue funding payments of the Noosa Oyster Restoration Project until the long-awaited approval from state government has been obtained. At its General Meeting on Monday, councillors debated the acceptance of a project report that marked a milestone in the payment process.

Council entered into an Alliance and Funding Agreement with conservation organisation The Nature Conservancy (TNC) in 2019, establishing a strategic partnership for the primary purpose of undertaking oyster ecosystem restoration in the Noosa River over three years. The Alliance and Funding Agreement provides for a series of deliverables and measurable outcomes to be achieved, the report being one of those key milestones.

The agreement has four payment milestones for Noosa Council’s contribution of $1.2 million toward the total $3.6 million project. Having paid its initial instalment of almost $180,000, a second payment of $200,000 is due from council upon demonstrated achievement of measurable outcomes which include the state government permits for oyster reef installation, which have not yet been obtained. Council heard the reef installation required

a development application that was referred to various state government departments for approval. Questions were raised about the siting of reef infrastructure in Noosa River, the extent of community consultation and the predicted success of growing oysters in the warm Noosa waters with previous oyster reef projects gaining success in colder waters. Continued page 4