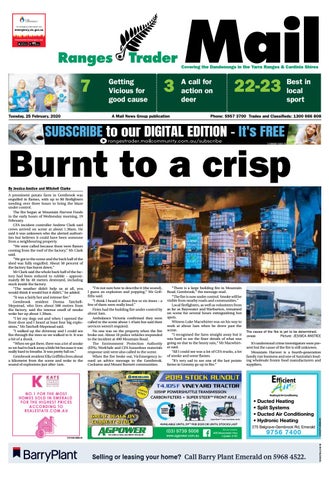 Getting Vicious for good cause

A call for action on deer

Burnt to a crisp By Jessica Anstice and Mitchell Clarke

“I’m not sure how to describe it (the sound), I guess an explosion and popping,” Ms Griffiths said. “I think I heard it about five or six times - a few of them were really loud.” Firies had the building fire under control by about 3am. Ambulance Victoria confirmed they were called to the scene about 1.45am but said their services weren’t required. No one was on the property when the fire broke out. About 10 police vehicles responded to the incident at 400 Mountain Road. The Environment Protection Authority (EPA), WorkSafe and CFA hazardous materials response unit were also called to the scene. When the fire broke out, VicEmergency issued an advice message to the Gembrook, Cockatoo and Mount Burnett communities.

“There is a large building fire in Mountain Road, Gembrook,“ the message read. “The fire is now under control. Smoke will be visible from nearby roads and communities.” Local firefighters, as well as volunteers from as far as Bayswater and Warburton, remained on scene for several hours extinguishing hot spots. Witness Luke Macwhirter was on his way to work at about 3am when he drove past the scene. “I recognised the farm straight away but it was hard to see the finer details of what was going on due to the heavy rain,“ Mr Macwhirter said. “All I could see was a lot of CFA trucks, a lot of smoke and some flames. “It’s very sad to see one of the last potato farms in Gemmy go up in fire.“

The cause of the fire is yet to be determined. 204938 Picture: JESSICA ANSTICE It’s understood crime investigators were present but the cause of the fire is still unknown. Mountain Harvest is a fourth-generation family run business and one of Australia’s leading wholesale frozen food manufacturers and suppliers.

NO.1 FOR THE MOST HOMES SOLD IN EMERALD FOR THE HIGHEST PRICES ACCORDING TO REALESTATE.COM.AU

A prominent potato farm in Gembrook was engulfed in flames, with up to 80 firefighters needing over three hours to bring the blaze under control. The fire began at Mountain Harvest Foods in the early hours of Wednesday morning, 19 February. CFA incident controller Andrew Clark said crews arrived on scene at about 1.30am. He said it was unknown who the alerted authorities but believes it could have been someone from a neighbouring property. “We were called because there were flames coming from the roof of the factory,” Mr Clark said. “We got to the scene and the back half of the shed was fully engulfed. About 50 percent of the factory has burnt down.” Mr Clark said the whole back half of the factory had been reduced to rubble - approximately 80 by 40 metres destroyed, including stock inside the factory. “The weather didn’t help us at all, you would think it would but it didn’t,” he added. “It was a fairly hot and intense fire.” Gembrook resident Donna TatchellMepstead, who lives about 500 metres from the factory, said the intense smell of smoke woke her up about 1.30am. “I let my dogs out and when I opened the front door and I heard at least four big explosions,” Ms Tatchell-Mepstead said. “I walked up the driveway and I could see fire through the trees so we walked to it. It was a bit of a shock. “When we got there, there was a lot of smoke so we had to back away a little bit because it was really hard to breathe. It was pretty full on.” Gembrook resident Ella Griffiths lives about a kilometre from the scene and woke to the sound of explosions just after 1am.