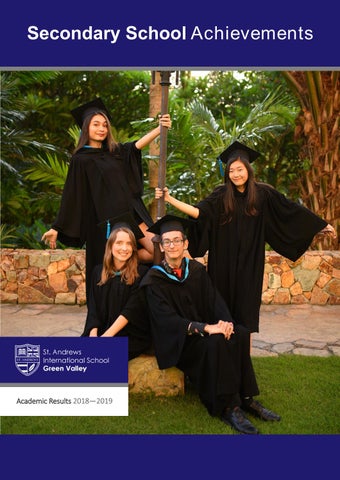 Academic Excellence Oxford Bound Congratulations to Mo (Sasitorn) Suksaisakulsakdi (Class of 2016). Mo has just completed a First Class Law Degree from Kings College London. Excitingly, Mo will now attend St. Hugh’s College at the University of Oxford from October 2019, undertaking an MSc in Law and Finance. Congratulations and well done Mo, we are very proud of you!

Next stop M.I.T Congratulations to Pierre Walker from graduate Class of 2017. After completing 2 years at Imperial College, London studying Chemical Engineering he has now been offered a place at MIT for his 3rd year! QS ranks MIT as the world’s No 1 University for 2018-2019. Fantastic news Pierre, we are very proud of you!

Top in Thailand Award in Science Congratulations to Foei Foei (Year 13) on achieving the Highest Mark in Thailand for IGCSE Double Award Science in the Summer 2018 exams. Foei Foei will be awarded her Top in Thailand Certificate on September 18 at Pearson Edexcel's Outstanding Learner Awards. This ceremony will take place at the Shangri-La Hotel in Bangkok. Fantastic work Foei Foei!!

Outstanding Cambridge Learner Award in Dutch Congratulations to Eva on winning the Outstanding Cambridge Learner Award for Cambridge IGCSE Dutch. This ‘High Achievement’ is awarded to learners who achieve the highest standard marks in the country (Thailand) in particular subjects. Eva attended the Cambridge Awards Ceremony in November 2018 to receive her award. Congratulations to Eva on her outstanding achievement, and its even more impressive that she took this exam when she was still in Year 9!

IB Results for 2019 The IB Diploma Programme is a two year course where students study six subjects; three at higher level and three at standard level. The maximum grade a student can achieve in one of their six subjects is seven points. In addition to the six subjects, Diploma students study Theory of Knowledge and complete an Extended Essay which provide up to three bonus points for students. The maximum IB Diploma score is therefore 45 points. The minimum score needed to pass the IB Diploma is 24 points and the world average each year is around 30. Creativity, Activity and Service (CAS) is also a core element of the IB Diploma Course as it encourages students to engage with the local community and also continue to find ways to improve themselves. The class of 2019 achieved outstanding results and we are very proud to report that in what is now becoming a proud tradition for St Andrews Green Valley, we once again achieved a 100% pass rate compared to a world average of 80%. This is the eighth year in a row we have achieved this result! Other headline facts include: 

A total of 26 students followed the IB Diploma curriculum in Year 13 with 17 of these students completing the full diploma.

Our Average Diploma Score was 32.6 compared to a world average of just under 30.

St Andrews’ Average Grade was 4.95 compared to a world average of approximately 4.70.

41.2% of our students were awarded a Bilingual Diploma.

Historical Record of IB Diploma Results Completing and passing the IB Diploma is a significant achievement. In 2019, over 166,000 students sat exams for the full Diploma or in individual subjects. St Andrews Green Valley had a total of twenty six graduating students with seventeen completing the full diploma. All seventeen of these students passed the full diploma with seven of the students achieving a Bilingual Diploma. In recent years, St. Andrews Green Valley has established a culture of academic excellence easily outstripping world averages and consistently producing results that establish it as the premier International School on the Eastern Seaboard.

Individual Excellence Many of our students have also achieved excellent individual IB Diploma scores. In 2019 students who achieved 39 points were in the top 13% worldwide; 40 points the top 10%; 42 points the top 3% and 45 points was the top score possible worldwide. The table below shows our honour roll. Name

Highest Individual Subject Grades In 2018, the world average was: 

Over the past 5 years at St. Andrews 

IGCSE Results for 2019 The International General Certificate of Secondary Education or IGCSE is the equivalent of the GCSE’s (O levels). Typically IGCSE’s are a two year course which students study in Years 10 and 11. Many of the IGCSE courses include a course work component but most typically conclude with examinations in May – June of the second year. Students receive grades of A*, A, B, C, D, E, F, G and U (ungraded) or 1 - 9 for their work with grades of A* C or 4 - 9 considered as strong passing grades. In total, thirty three St Andrews students sat a full range of IGCSE exams at the end of year 11 achieving excellent results which, as usual, were well above international standards. Students at St Andrews will typically sit exams in seven to ten subjects at IGCSE level, although some students do sit more. The core subjects of English, Maths and Science are at the centre of the IGCSE programme. As St Andrews is not satisfied with just delivering the normal IGCSE programme, students are given many opportunities to strive for additional and higher results. Examples of this are: English 2nd Language exams being taken in year 9; Year 10 students sitting English First Language and Mathematics exams one year early; students sitting AS Maths exams as well as exams for the normal maths programme; students sitting exams in 3 individual Sciences (Physics, Chemistry and Biology) instead of the Coordinated Science programme. St Andrews are very proud of the overall results achieved by our Year 11 students. A few highlights are: 

IGCSE Accelerated Programmes IGCSE exams are normally taken at the end of year 11, however, at St Andrews Green Valley we are strong believers in encouraging our students to sit IGCSE exams early if they are capable of doing so. By doing this, we accelerate our students learning thereby giving them a better chance to achieve higher IGCSE and IB results and in turn improved opportunities for University entry. First Language English and Mathematics This year twenty one Year 10 students took on the challenge of sitting their English First Language exam one year early. Nineteen of these students were about to achieve a strong passing grade of 4 - 9 (A* - C) with eigth of the students achieving grades of 7 - 9 (A *- A). In Mathematics nine students sat the IGCSE Maths exam and all achieved excellent results with 100% A* - B (grades of 9 - 6) and 89% A* - A (grades of 9 - 7).

English as a Second Language

For a number of years the English Department has prepared students to take the IGCSE English as a Second Language (E2L) exams at the end of year 9. Many other schools have students sit this exam at the end of year 10 or 11. By teaching the second language curriculum in year 9, our students are able to concentrate on the English First Language and English Literature syllabi in years 10 and 11. Therefore by the end of year 11 many students achieve passing grades in IGCSE English as a Second Language, English First Language and English Literature. An outstanding achievement. Over the past 6 years over 149 students have been entered for the English as a Second Language exam before Year 11 with a spectacular pass rate of over 90%. This year nineteen Year 9 and 10 students sat the E2L exam with 95% achieving a grade of C or better! Science

All students study the IGCSE Coordinated Science during Year 10. At the end of Year 10, however, selected students have the option to move up to Triple Award Science where they study Biology, Chemistry and Physics as individual subjects. This is excellent preparation for IB Diploma, giving students a great lift towards maximum results. Over the past 6 years forty nine students have entered the Triple Award Science programme achieving a total of 65 x A* and 35 x A grades out of a total of 147 possible grades. Thatâ&#x20AC;&#x2122;s a grade of A* - A 68% of the time. Absolutely outstanding!

Historical Record of IGCSE Results Secondary students always find studying IGCSE courses in Years 10 and 11 challenging as the workload is greater than when they are in year 9. St Andrews Green Valley students however have a strong track record of meeting this challenge, achieving excellent exam results. The table below summaries IGCSE results achieved by SAIS GV students between 2015 and 2019. The comparison to the UK Average shows that our results have consistently been well in excess of international standards.

University Information Nearly 100% of St Andrews students study at university once they graduate from school. Our students travel to a wide range of countries to pursue their tertiary education and many have been accepted into the Top 50 World Universities ranked by Times Education. These include: University College, London, Kings College London, University of British Columbia, University of Toronto, University of Melbourne and University of Hong Kong. The majority of students attend universities overseas: approx. 30% to the UK, 15% to North America, 15% to The Netherlands, 10% to Australia, 10% to the EU and 10% to Thai Universities. Here is an overview of where some of our graduates are studying this year.

Class of 2019 International Relations & Organisation University of Groningen The Netherlands

End of the Year Award Winners 2018 - 2019 In order to achieve academic excellence at IGCSE and IB level we promote a strong culture of achievement throughout the school, which culminates in our end of year academic awards ceremony. Congratulations to the winners of the following End of Year Academic Awards.

Most Consistently Hardworking Most Improved Student Read about our Secondary School Achievements for 2018-2019, including outstanding IGCSE and IB Diploma results and further details on our gr...

Read about our Secondary School Achievements for 2018-2019, including outstanding IGCSE and IB Diploma results and further details on our gr...